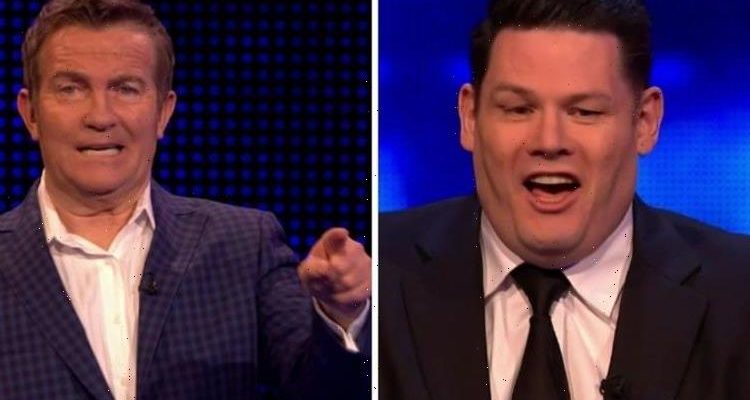 The Chase: The Beast brands some fans 'idiots'

On Thursday’s The Chase, ITV host Bradley Walsh welcomed four contestants onto the show to go up against Mark ‘The Beast’ Labbett in a bid to take home a cash prize. However, Mark ended up labelling viewers as “idiots” when he jumped in to defend a contestant, before regretting his harsh choice of words.

Contestants Lesley, Ellie, Rob and James went up against The Beast during the most recent instalment of the popular quiz show.

After Lesley was eliminated during her round, it soon became Ellie’s turn to go head-to-head with the Chaser.

But she only managed to answer two questions correctly and secured just £2,000 to take her into the face-off with The Beast.

With little confidence in herself, Ellie opted to accept Mark’s lower offer of £1,000 and an extra step to take back to her team.

Anticipating what viewers would make of Ellie’s decision, Mark was quick to put assumptions to rest.

He firmly stated: “I know this is a risky thing to say but I am going to say it.

“For those people sitting at home screaming, ‘Never go for the low’, well, you’re idiots!

It appeared Mark was correct as Ellie managed to make it through to the Final Chase.

When a relieved Ellie headed off the stage, Mark could resist asking everyone: “Hands up who thinks she should have taken the one rather than the £32,000?”

Everyone, including Bradley Walsh, raised their hands in agreeance and awkwardly grinned.

James and Ellie made it into the final to play for £10,000, but Ellie admitted she felt “very nervous”.

And despite racking 17 steps for Mark to reach, he caught the team with several seconds to spare.

The Chase fans took to Twitter to vent their outrage at The Beast’s offensive remark.

“The Beast calling us all idiots,” Alan Wiggins moaned.

However, some viewers stepped in to defend Mark’s for his comment during the episode.

Television Live tweeted: “Whoever has made Mark Labbett upset on the Official #TheChase Hashtag please say something nice things about the show.” (sic)

The Chase airs weekdays from 5pm on ITV.