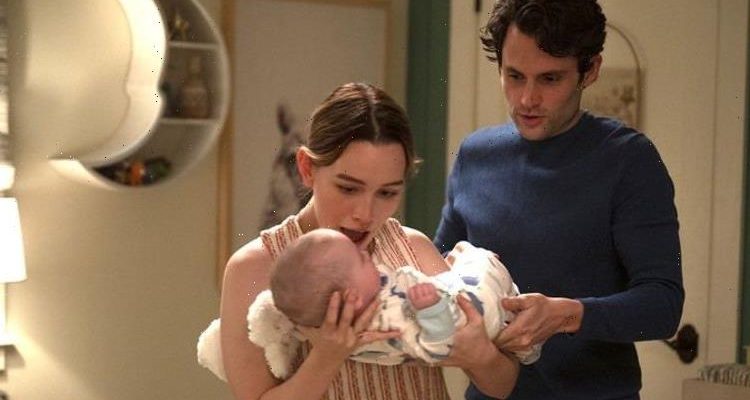 You season three will air on Netflix on October 15 and the release date announcement included another twist. During the video, the name of Joe (played by Penn Badgley) and Love Quinn’s (Victoria Pedretti) baby was revealed. The couple decided to call their baby son Henry – but fans are convinced they were expecting a girl.

Were Joe and Love expecting a baby girl?

‘You’ fans were thrilled to hear season three had been given an official air date of October 15.

In the chilling video, Joe is heard speaking to his unborn son as he bakes him a cake saying ‘Welcome baby Henry’.

The name reveal was a huge deal for fans who have been wondering what the married couple would call their child.

Needless to say, they were a little disappointed over the ‘basic’ name, but hopefully, season three will explain the meaning behind it.

Another thing they are confused about is the fact Love gave birth to a boy, instead of a girl.

One fan took to Twitter, saying: “I’m confused…Y’all say it’s a boy but at the end of season 2 Joe says he’s having a girl.” [Sic]

They proceeded to share a link to a video of the season two final scene, which shows Joe moving into his new home with Love.

He is heard saying: “I’m ready to meet my daughter, I’m ready to be the good father I never had.

“To make the family I always dreamed of, the one she deserves. It’s funny how fate works.”

If fans remember back to the second season, Joe was just about to attack Love when she declared she was pregnant.

She had taken a pregnancy test and although she did not know the sex of the baby at the time, she believed it was a girl.

From then on, Joe becomes obsessed with the thought of being a father and he is heard talking about his baby daughter.

With this in mind, it seems although the pair had a feeling it would be a girl, it was never actually confirmed.

When they eventually found out the baby’s sex, they discovered they were having a boy.

In the teaser video for the third season, Joe is heard saying a boy “was not what we were expecting”.

From this, it seems they had misjudged the unborn child’s sex from the outside.

Another fan said on Twitter: “They probably switched it because it would be more interesting for him to have a boy than a girl.”

It would be much more emotionally challenging for Joe to have a son, as he is likely to see elements himself in the child.

His ultimate goal is to make sure his child does not end up down the same path as he did.

With a girl, this would almost be too easy, so fans will be introduced to Henry in season three.

Another fan pointed out: “He does say in the trailer ‘a boy is not what we were expecting’.

“Meaning they were told the wrong gender for the baby (as far as we know at least).”

The whole story behind the change of sex will hopefully come to light at the start of the third season.

Some promotional photos have been released and they show Joe and Love making a fuss of their baby son.

In another image, Joe is seen carrying Henry in a harness strapped around his chest.

Fans will be interested to see whether he is able to form a bond with his child or if he sees him as a reflection of himself.

You season 3 airs on Netflix on October 15.