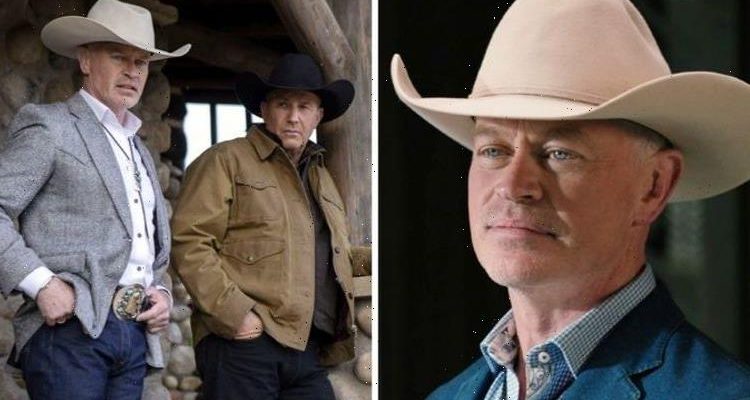 The fourth season of Yellowstone is releasing in just over two months and viewers are itching to discover what will come of the powerful Dutton family after last year’s horrific revelations. As a foreboding new Instagram trailer teases revenge aplenty in the next outing on Paramount, the brief clip could also be hinting one of the ranch’s most sinister foes could be coming back from the grave.

A new trailer for the fourth season of Yellowstone could be teasing the return of Malcolm Beck (played by Neal McDonough), fans have claimed.

The very brief promo was recently released on Instagram and features an unknown character being sent to a watery grave.

New footage features an overhead shot of the ranch’s nearby river before a gunshot is heard and a white hat is carried by the current.

Blood starts to pour from the anonymous victim, while a tagline promises ‘Every. Body. Pays.’

Upon seeing the new clip, fans raced to the comments to speculate who the hat could belong to.

Some viewers have become convinced the white stetson was worn by season two adversary Malcolm Beck, who could be returning to make one last strike against the Duttons.

One fan took the theory one step further and speculated one half of the Beck brothers could have been behind the attacks on John Dutton (Kevin Costner) and his family all along.

“Think about it, it didn’t really show him dead, and led us to believe he just died there in the field.”

Finally, the fan speculated: “He’s the one who attacked everybody!”

Although he was still technically alive when the camera cut away, his absence throughout the entirety of season three seemed to confirm his demise.

Now, the apparent appearance of his hat in the new trailer is being taken as proof of his miraculous return from the dead in season four.

Unfortunately, it seems his potential comeback could be shortlived as he’s presumably slain once and for all in the teaser.

Alternatively, other viewers believe a particularly striking sound effect at the start of the trailer could also provide a hint as to who’s being taken out.

“You can hear the casting of the fishing rod at the beginning of the clip…” replied one fan.

And another elaborated: “Listening to that line going out makes me think it’s Rourke!”

While their corporate rival favoured a baseball cap over the cowboy stetson, the location of the scene and the unmistakable sound of a casting rod is more than enough evidence to suggest Roarke will come to a sticky end in season four.

Yellowstone season four will premiere on Sunday, November 7 on Paramount.