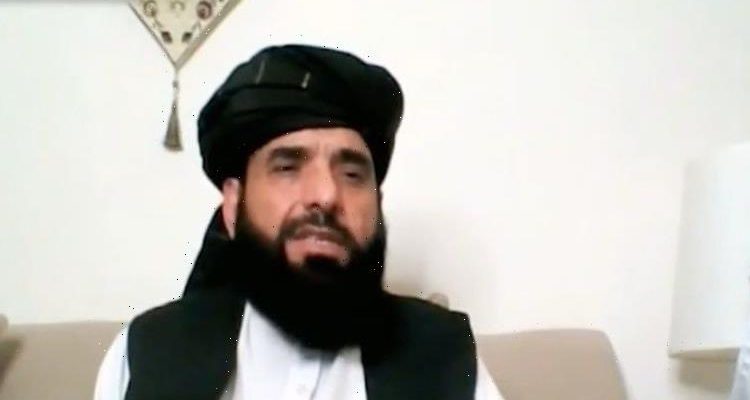 Fox News presenter Lara Logan has grilled Taliban chief Suhail Shaheen over his group’s support of Al-Qaeda activities. However, the Taliban spokesman failed to openly reject the terror group despite demands from US President Joe Biden the group renounce all affiliations with terrorists. The tense exchange came less than a day after the Taliban reclaimed Afghanistan’s capital following the withdrawal of US troops.

Ms Logan asked: “Why have you not renounced Al-Qaeda?”

The Taliban chief replied: “If you have read  the Doha agreement in that we have clearly said, we will not allow anyone, whether an individual or an entity, any group to use the site of Afghanistan against the United States, or its allies in any other country of the world.”

The Fox News reporter appeared unsatisfied with the response and pressed on: “That’s saying you won’t allow your territory to be used.

“But the specific question is – why will you not renounce Al-Qaeda?

Shaheen said in response: “We have said that we condemn killing of civilians by any entity, any group, whether it is an organisation, a state or any group to kill civilians.

“That is our general denouncing of anyone.”

During the unsuccessful peace talks that took place in Doha, Taliban’s desired recognition could only happened if they disaasscoited themselves from Al-Qaeda.

Al Qaeda is a militant Islamist multi-national organisation, operating as a network of Islamic extremists and Salafist jihadists.

Western generals and politicians have warned of the “inevitable” return of Al-Qaeda to Afghanistan.

On Monday, UN Secretary-General Antonio Guterres called on the UN Security Council to “use all tools at its disposal to suppress the global terrorist threat in Afghanistan”.

Bin Laden’s al Qaeda organisation orchestrated the 9/11 attacks on the US in 2001.