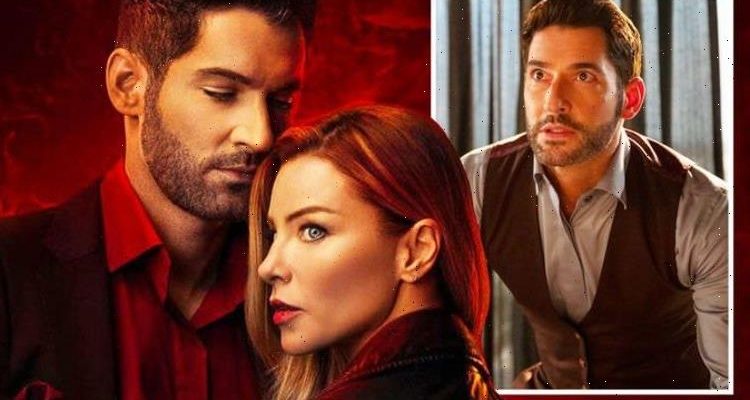 Lucifer fans petitioned for the show to be saved in 2018 when Amazon Prime Video failed to renew the drama. Netflix went on to buy the rights to the programme and commissioned three more seasons for viewers to enjoy. However, with season six being the final chapter in Lucifer Morningstar’s (played by Tom Ellis) story, why is it coming to an end?

Why is Lucifer ending after season six?

Originally, season five was supposed to bring the show to a fitting conclusion, wrapping up all the characters’ stories.

However, bosses at Netflix offered showrunners Joe and Ildy Modrovich the chance to write more episodes for one final season.

They took the opportunity and ran with it as they felt the ending to season five was “rushed” because they thought it was the end.

Joe explained: “[We were like] No, this is perfect. If we do this [extend to season six], it’ll ruin everything!

“Then three days later, you’re like, ‘Wait, how could we not have done this?’,” he continued, with Ildy adding how they did always have plans in mind for future episodes.

“It’s the story we were always going to tell, but just written much larger and to me so much more interestingly,” Ildy said.

“It breaks my heart to think we weren’t going to do it this way. [We want to] really explore how our characters end up where they ended up,” the showrunner told Entertainment Weekly.

Therefore, the show was never going to be extended beyond the sixth season as the writers had formulated the perfect way to end the show.

However, this hasn’t stopped fans from expressing their heartbreak the drama they petitioned to save is going to be no more.

The story we were always going to tell

One fan wrote on Twitter: “I can’t believe we’re getting the final season in just three days. To be honest, I’m a bit worried about the ending now because of the damn reviews.

“But now I choose to ignore it and to trust our writers. Actually, I’m fine with whatever ending as long as Deckerstar is together.”

Another added: “I cannot possibly see how #Lucifer could have a bad ending. Not with the promotion we’re getting.”

Whilst a third posted: “Love #Lucifer so much. Season five was such a perfect ending. Really going to miss it when it’s over.”

What have the stars of Lucifer said about the show’s ending?

Discussing how the hit drama will come to an end, the actor who plays Lucifer, Tom, said: “I hope that they’ll be crying, I really hope they’ll be sobbing!

“And then I hope that their hearts will be filled with joy at the same time,” he added with the actress who plays Chloe Decker, Lauren German, also having her say.

“Yeah I agree, I think, you know, hopefully, it’s a gratifying, bittersweet… as Tom was saying earlier I think bittersweet is a great encapsulating term for the ending.

On the show ending after six seasons, Tom added: “We thought season five was the end, so in a sense, mentally, I made peace, kind of, with the fact that we’ve gone full circle with this story.

“Season six holds up because it was an opportunity for every character in their own way to say goodbye properly, and that never really happens.”

Lauren added: “The writers and Tom did such a beautiful job bringing everything together. I think people are going to see so many different layers.

“Chloe and Lucifer being together and being a team, and what they sacrifice. Maze and Eve. Ella going through her journey. I mean, every character has these sort of eye-opening adventures and epiphanies. I think people are going to like how it ends,” she told TV Guide.