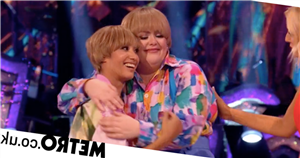 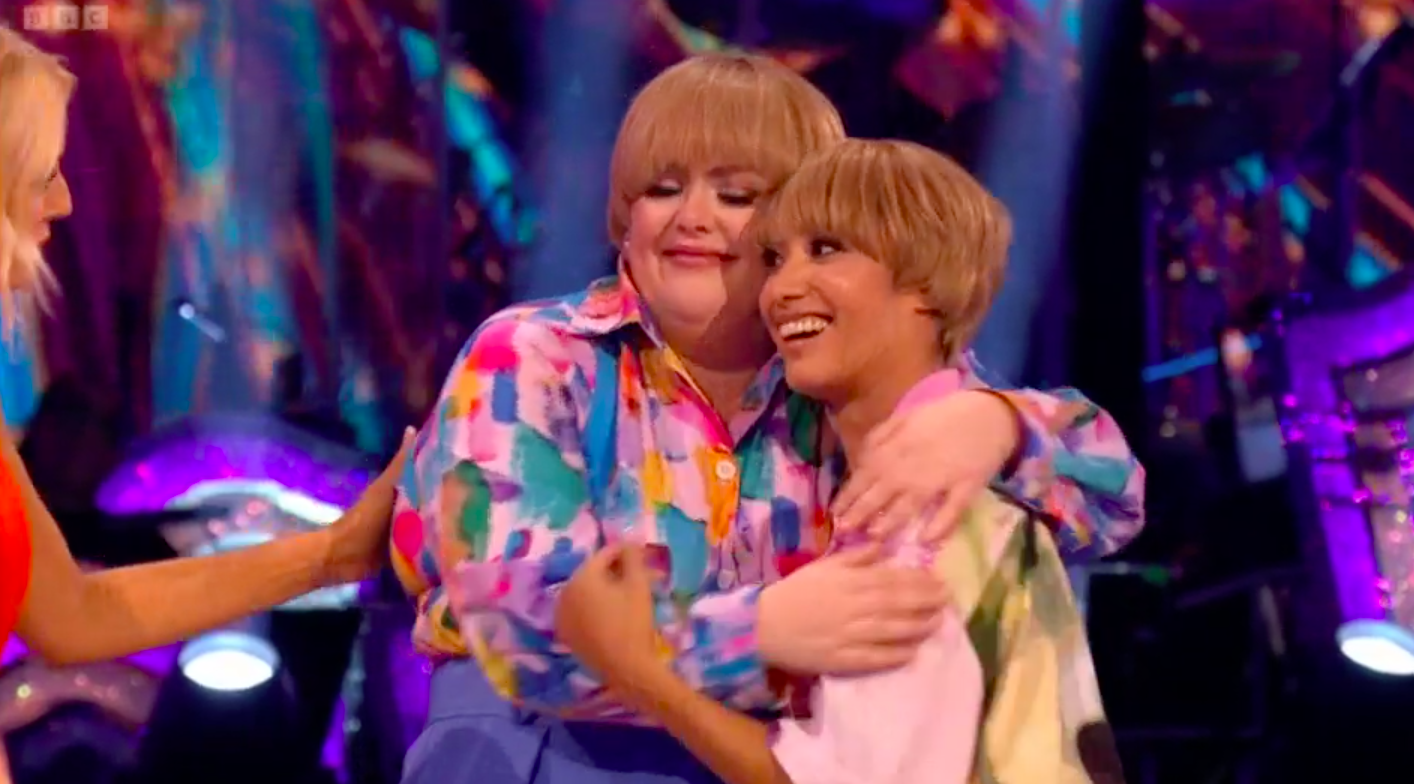 Strictly Come Dancing’s Jayde Adams has become the fourth celebrity to be eliminated from the beloved competition during the special edition celebrating 100 years of the BBC.

The comedian was voted off by judges Motsi Mabuse, Craig Revel Horwood, and Anton Du Beke after she faced Molly Rainford in the dreaded dance off, having performed her Charleston to The Ballad Of Barry and Freda (Let’s Do It) again.

Jayde battled it out against Molly Rainford and Carlos Gu and their Grange Hill routine, with the saved couple becoming emotional as Jayde was eliminated.

When asked by Tess Daly about her time on the show, Jayde was full of praise for her partner Karen Hauer and was reduced to tears as she shared her love for the show.

‘This has been the best thing I have ever done in my life and I will carry it to my grave,’ the ‘Strictly super-fan’ enthused.

‘It has been an absolute pleasure working with you [Karen] and learning about so much that will go into my own stuff, in my own work.

‘You are one of the most gifted people I have ever worked with Karen. And everyone on this show, said it to me, when I had you, they said “you’ve got the best one” sorry everyone, and I did and you are fantastic and this has been such an honour.’

Jayde continued: ‘Not only have I got to be on Strictly Come Dancing but I got to have Karen Hauer, you are amazing, thank you for everything! I’ve done shows before, and nothing holds a candle to the way that this show is run.

‘It is an incredible thing to be a part of as a performer, we are so looked after, and in this industry where so many people aren’t looked after, this show is incredible, well done everyone.’

Karen was then asked if she had any words for her partner. ‘It’s been a roller-coaster of emotions for us, and you are so special, so powerful, so emotional, and I’ve loved every second,’ she said. ‘Thank you, Jayde.’

The judges noted how difficult it is to choose between couples in the dance-off, as it’s a place no couple wants to find themselves.

‘Well two very different dances but based on technical ability alone I would like to save Molly and Carlos,’ Craig said.

‘Well I thought you were both brilliant,’ Motsi added. ‘I thought that both performances were better than Saturday night but I am going to save Molly and Carlos.’

Shirley also agreed with the trio, adding that she would have saved Molly and Carlos, but did declare that Jayde is ‘the best entertainer’ in the competition and a real ‘performer.’

Jayde provided viewers with plenty of memorable moments over her short stint on Strictly, including an emotional ballroom routine last week which she dedicated to her late sister.

The former Adele tribute act and her partner, Karen, who is the longest-serving Strictly pro, even reduced judge Shirley to tears with their American smooth to Bette Midler’s Wind Beneath My Wings.

After being told that she is a ‘hero’ by the panel, Jayde reminisced on her relationship with Jenna, who died 11 years ago.

‘I just think it’s amazing and I feel so lucky that I get to do this, because so many people lose people and grief is so difficult and it’s so personal, and to be able to keep the promise that we made her, that we wouldn’t let people forget her, is the most incredible gift that anyone could ever give me and my family,’ she told host Claudia Winkleman.

And, who could forget her iconic Flashdance routine from Movie Week, which was hailed the ultimate representation of body positivity by viewers.

Fans of the show are heartbroken to see her eliminated, taking to Twitter to share how ‘devastated’ they feel.

‘jayde loves strictly just as much as we all do, and i’m so happy she got to live her dream this series!’, penned another.

But, do not fear, as Jayde assured her followers she is still ‘booked and busy,’ as she prepares to head on her own comedy tour.

The remaining 11 couples will take to the Strictly dancefloor next when Strictly Come Dancing returns on Saturday for its Halloween Special.

Strictly Come Dancing returns on Saturday at 6.50pm on BBC One.