AS if there hadn't been enough drama in the villa after the shenanigans of Jordan and Anna, the Islanders had to deal with seven screaming babies.

And Anna was less than keen to play happy families with her estranged boyfriend of two days. Find out everything you need to know about episode 45 below – including which four Islanders were eliminated… 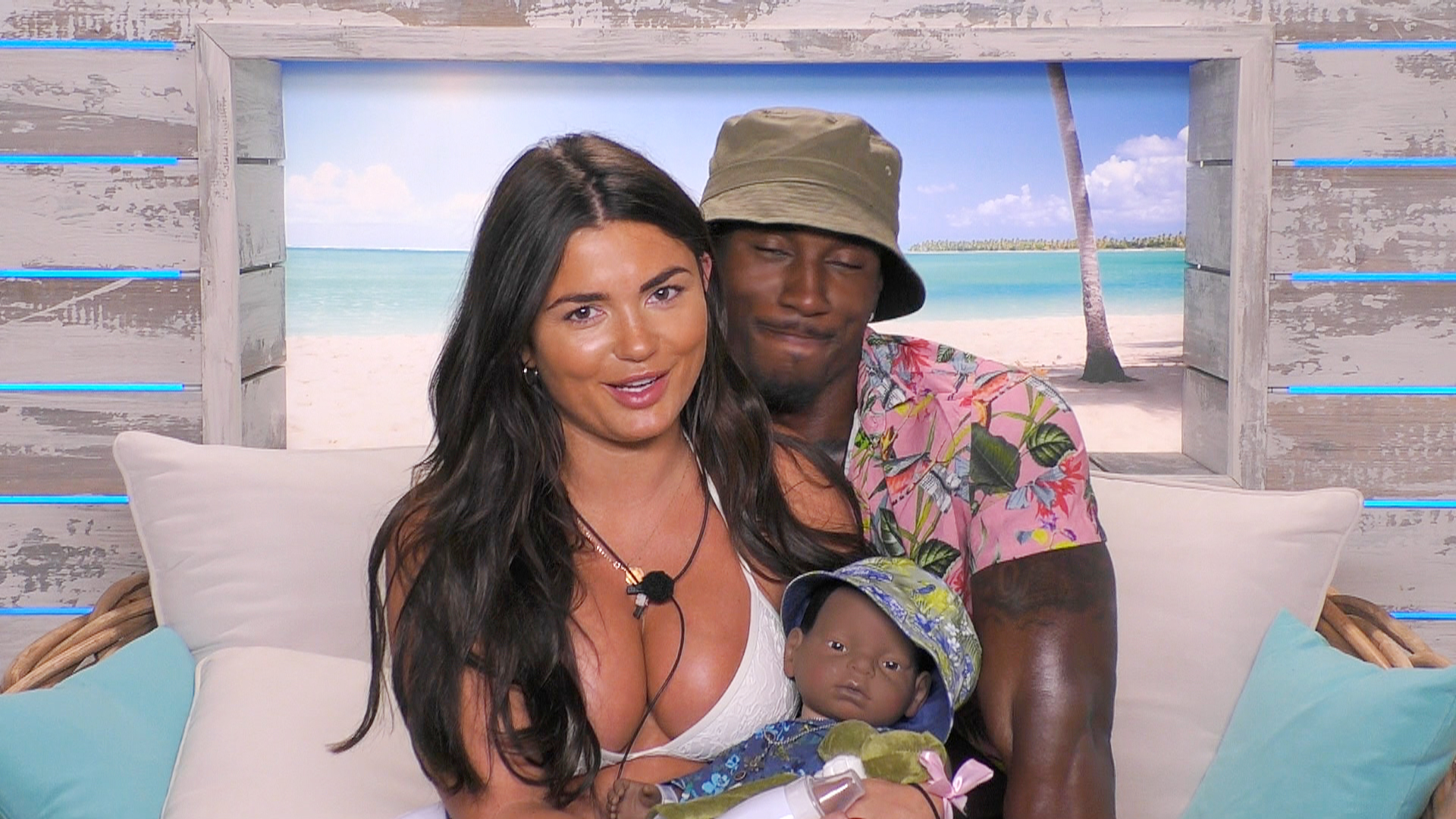 The drama continued in last night's episode as the fall-out from Anna and Jordan's massive bust up ensued.

And the girls were quick to swarm around Anna as she dealt with the blow – with Maura even opting to sleep on the daybeds with Anna in a sign of solidarity. Girl Power indeed!

Meanwhile the rest of the gang soon learnt that it was Curtis who encouraged Jordan to approach India before speaking to his girlfriend Anna.

To say this didn't sit right with the feisty pharmacist would be an understatement – as Anna brazenly declared: "I'm never talking to Curtis again."

And the stubborn Londoner didn't change her tune after a night's kip – telling an apologetic Curtis: "I don’t know if you’re a good person.

"A good person would never tell someone to do that to their other half.

"Do you not care about me one tiny bit? I’ve been living with you for two months.” 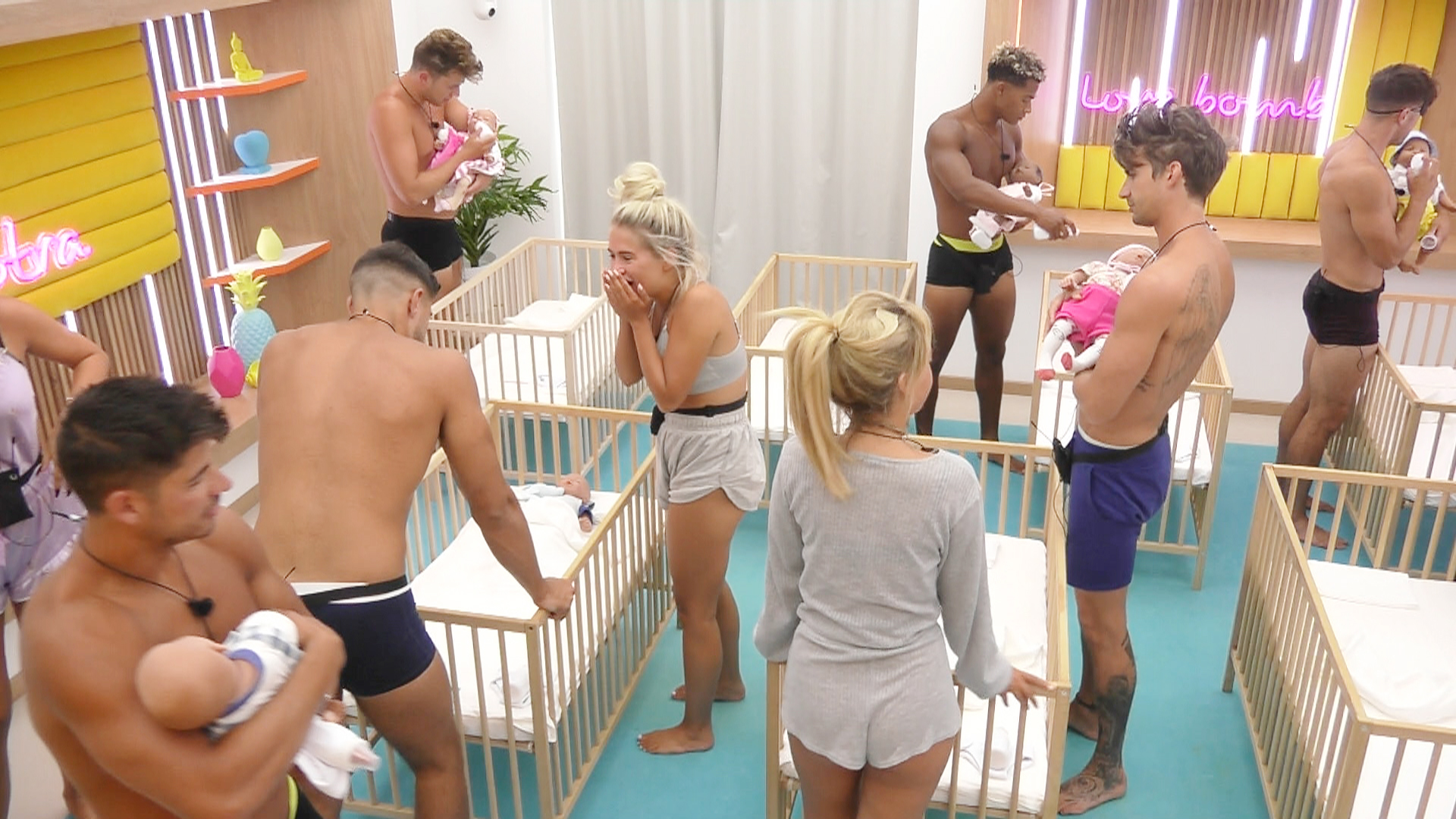 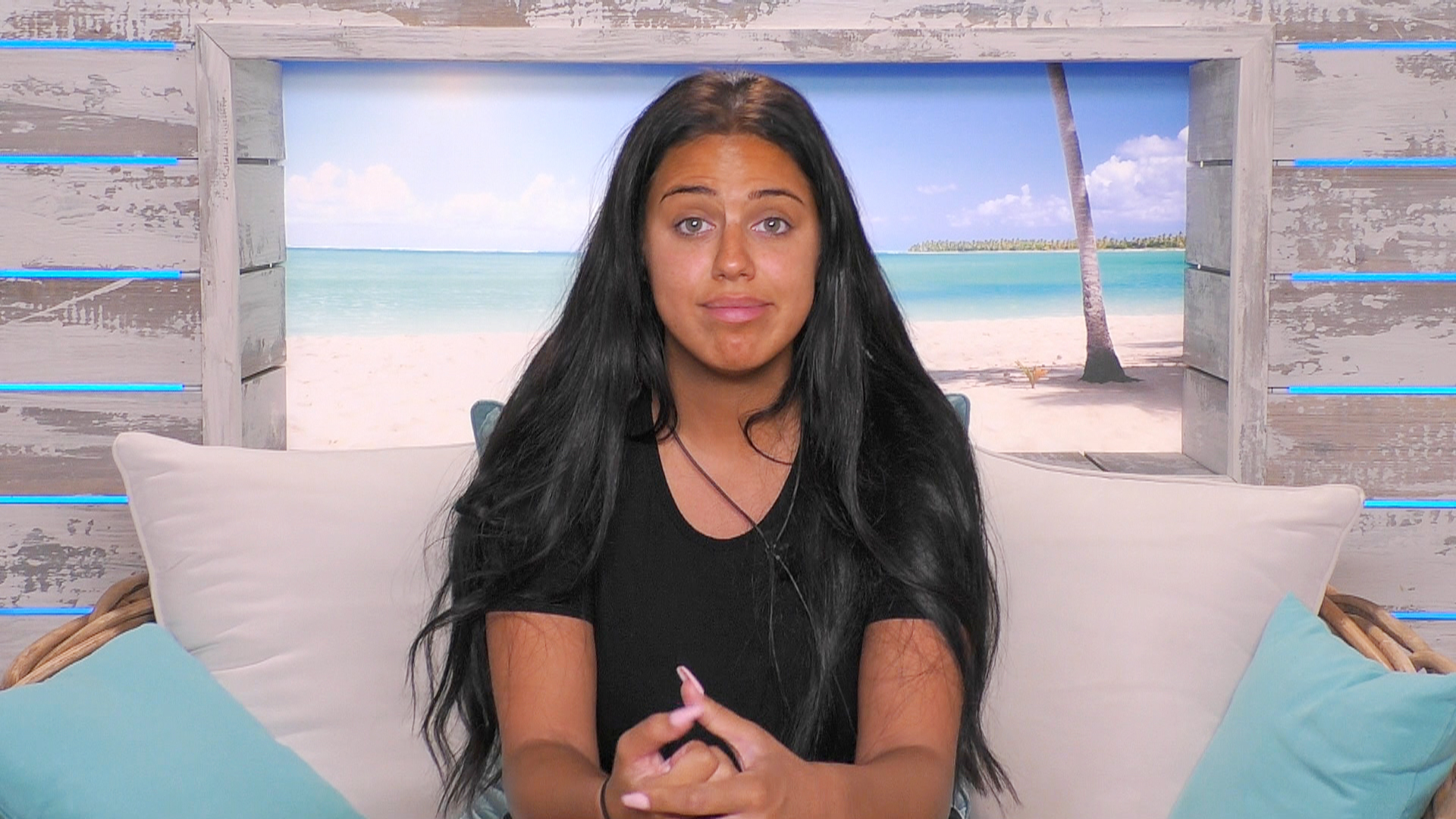 And poor Curtis didn't just get an earful from scorned Anna, Maura was left so unimpressed by his antics that she started to question her feelings for the professional dancer.

Speaking in the Beach Hut, Maura said: “For Curtis to give that advice to Jordan, it baffles me.

"If he was my boyfriend, is that what he would do? Would he pull a girl before chatting to his girlfriend?”

And a conversation between them later that evening didn't go smoothly to say the least as Maura defended her pal and condemned Jordan for asking her "To be his girlfriend a few days ago and now he’s cracking on with someone else.”

Before the dancer put his foot in his mouth even further by praising him for being "brave for doing it" – And Maura wasn't having any of it, declaring it cheating and questioning her beau if he would do the same thing to her if she was his girlfriend. 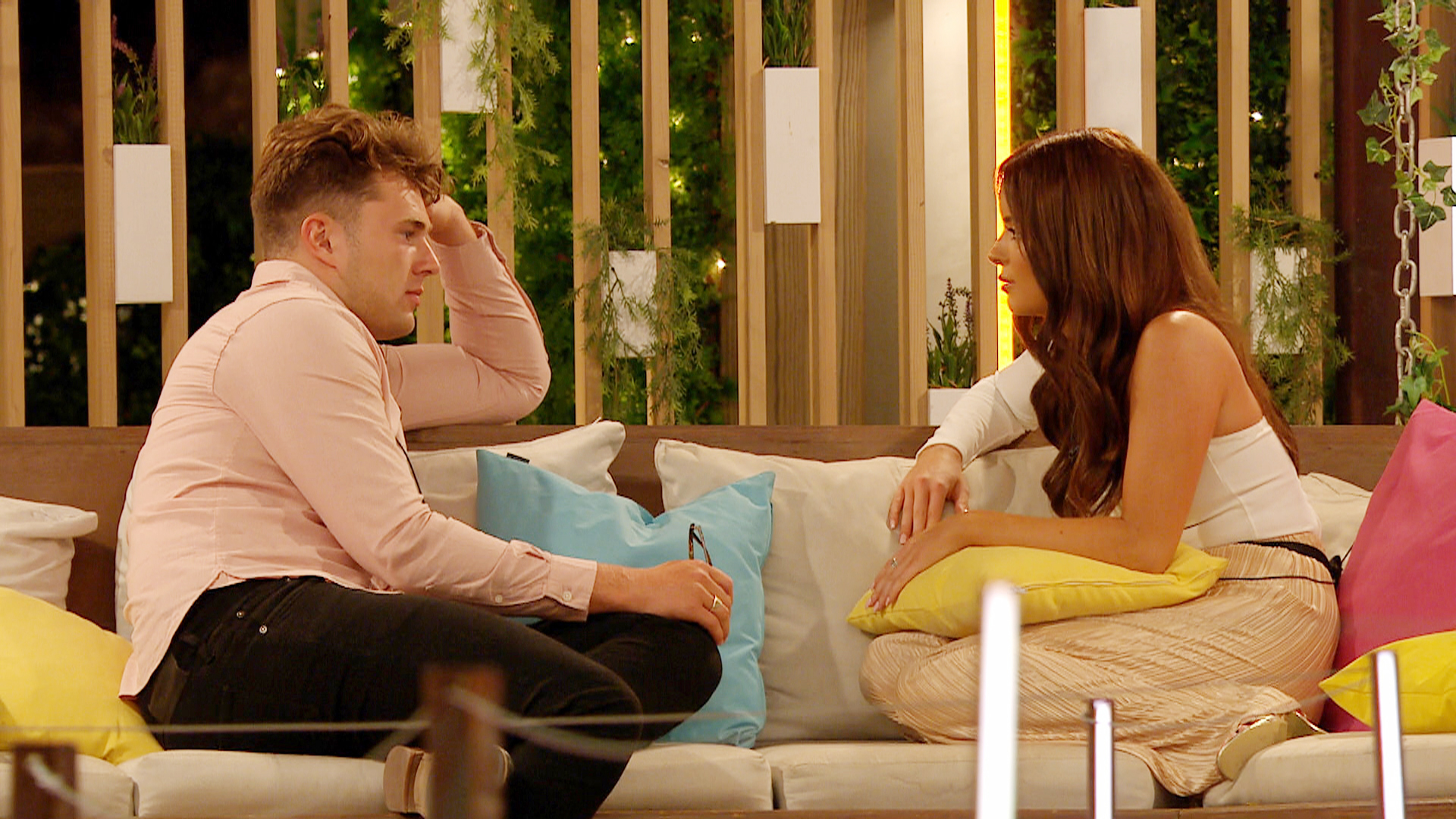 And she does everything in her will to keep away from her boyfriend of two days within the confines of the villa …that is until it was rocked by the dreaded baby challenge.

The Islanders were woken up with a jolt to the screams of babies – everyone's favourite morning alarm – and each couple was tasked with taking care of their own lifelike plastic doll.

That definitely didn't help ease awkwardness between Jordan and Anna who,  still reeling from recent events, was less than thrilled to be co-parenting with her cheating man.

She told the beach hut: "I don’t want a baby with him [Jordan].”

The seething Kim Kardashian lookalike refused to partake in the challenge, leaving Jordan to be a single dad.

Elsewhere, the rest of the Islanders embraced the challenge with aplomb – especially Curtis who took it open himself to hold a daddy-dance class for the new dads to bond with their tots.

Though Ovie had already taken to parenthood like a duck to water, thrilled by his baby coming equipped with a bucket hat like his own.

Him and India named their baby Raymond Junior while Curtis and Maura called their child Bella.

Molly-Mae and Tommy opted for the less original Tommy Junior, and Chris and Harley chose a more out their name – Penny-Sue Tinkerbell.

Anton and Belle named their little tot Valentino while Amber and Greg went for Kobe.

But it was Ovie and India and Tommy and Molly-Mae who were all crowned the parents of the year in the exhausting challenge.

And after the restless nights and Anna-Jordan fallout, the drama didn't stop there in the villa as a shock elimination saw two couples dumped from the Island.

Jordan was alerted to the bombshell with a text – announcing to his fellows: "Islanders. Please gather around the fire pit immediately.”

And unfortunately, time was up for Harley/Chris and Jordan/Anna who's fate was sealed by the public with the least amount of votes. 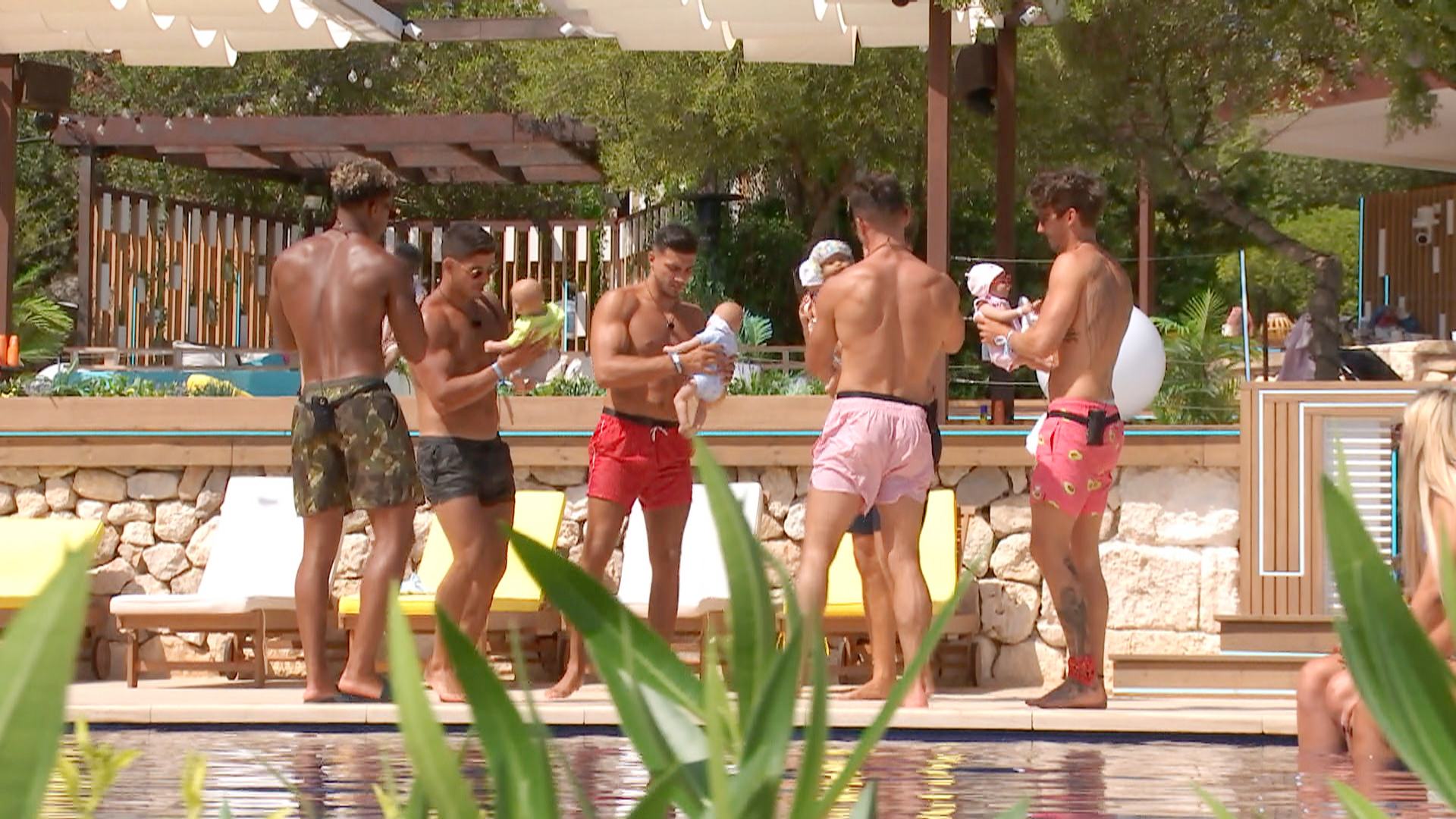 When is the final of Love Island on ITV2?

The final of Love Island is taking place on Monday, July 29.

The final four couples will be in with a chance of winning £50,000.

Until then, get your fix of the show every night on ITV2 at 9pm where the main programme, narrated by Iain Stirling, gives you the lowdown on all the goings-on in the villa – from couples cracking on to singletons getting mugged off.

On Saturday, July 27, Stirling will give fans a look back at the past week in the villa at 9pm.

The penultimate episode takes place at 9pm on Sunday, July 28, followed by Caroline Flack's spin off show Aftersun at 10pm, where she discusses the latest action with celebrity guests, as well as those eliminated from the villa.​