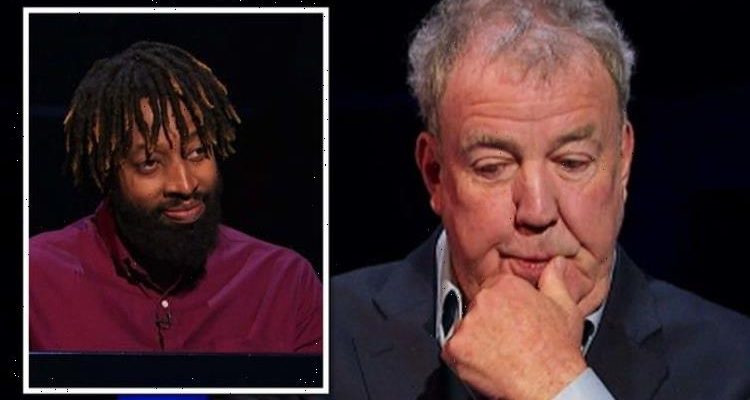 Who Wants to Be a Millionaire: Jeremy 'worries' for contestant

The revamp of the long-running ITV quiz show Who Wants To Be A Millionaire saw Jeremy Clarkson asking contestant Somebi a series of multiple choice questions, with the chance of winning all to take home £1000,000. But during the quizzing, Jeremy admitted that he hadn’t expected Somebi to get very far, adding that he had “worried him.”

When the brewery worker passed the £64,000 mark, Jeremy opened up about his performance.

He said: “I’m going to be honest with you, there’s been a lot of stumbling around and ‘oh I don’t know’.

“If on a first date they say oh what’s your star sign leave the room, simply get up leave your drink untouched and go – they’re not going to be worth pursuing.

Somebi ended up leaving with the money after deciding not to take the game any further.

He had set his safety net at £16,000 after using two solid phone a friend options to secure correct answers.

One of the questions he needed extra help with was: “Which word describes a state or society governed by the wealthy?”

He called his friend Theo, who corrected suggested the answer was “Plutocracy.”

Another question which saw Somebi phoning his girlfriend for advice was “In All Creatures Great and Small’ TV adaptations, what is the name of the central character?”

Somebi admitted he had “no idea” and immediately called his partner, Sue.

Luckily, she was clued up on her TV knowledge and knew the answer was James Herriot.

Somebi had also used the 50/50 option with his first question.

He was asked: “The Poppy Appeal is a fundraising campaign held every November by which charity?”

The contestant was unsure, so asked for two of the four potential answers to be removed.

This left The Royal British Legion and The Invictus Games, and Somebi was able to correctly answer the former.

Some took to Twitter to express their surprise that the player needed to use help with the answer.

One said: ” The Poppy Appeal and remembrance day have been around for his lifetime.”

Another wrote: “Crazy he didn’t know who it was straight away!”

“How didn’t he get that,” a third asked. But ultimately Somebi was able to secure an impressive amount of money, leaving the show with £64,000.

Who Wants to be a Millionaire airs on Saturdays at 9pm on ITV.