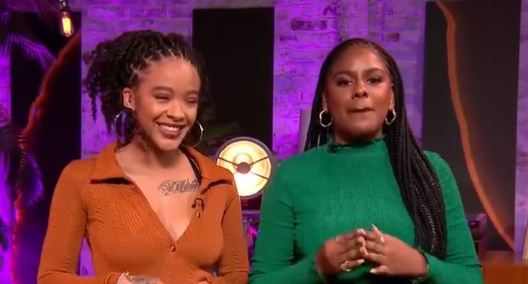 White Yardie was forced to defend himself after his Jamaican heritage was called into question on Channel 4 debate programme Unapologetic.

Unapologetic, which made its proper debut following a successful pilot during Channel 4’s Black To Front day, sees the two presenters address the uncomfortable issues surrounding racism and colourism within the Black community.

In the first episode, White Yardie took part in a discussion about ‘who gets to define Black culture’.

The social media star was born in England but moved to Jamaica with his family when he was just three months old. He then spent the next two decades growing up and living on the Caribbean island, learning to speak Patois while being fully immersed in Jamaican culture.

When Zeze asked if he ‘classes himself as Jamaican’, White Yardie stated: ‘I do class myself as part of the Jamaican culture but it’s one of them ones where I have never given myself any titles of anything. People have given it to me.

‘I would class [myself] as Jamaican because of my experience and also I spent the majority of my life in Jamaica, and also my whole life is lived as a Jamaican lifestyle.

‘Three months all the way up until I was 18. That’s the foundation of my life.’

GB News presenter Inaya Folarin then shared her thoughts on who should define Black culture, to which she said: ‘To me Black culture is just anything and all that that emerges from people of Afro-Caribbean heritage and so it doesn’t have to be this rigid defining thing that has limits.

‘I think the culture, the music, the food, any of those things that emerge from people of African heritage it really is a broad term of what Afro-Caribbean heritage is and I think anyone can enjoy those things and appreciate them and take inspiration from them.’

Inaya also noted that her mother has lived in the UK for around 30 years and considers herself to be British.

Many viewers criticised the direction of the debate, with one tweeting: ‘Just seen @White_Yardie interview and I can not believe he kept his composure throughout. How disrespectful. Furthermore when he was out here day and night raising money for the islands whilst your fave West Indian UK celebs were arguing on clubhouse where were these questions?’

Another weighed in: ‘Just wanna say well done @White_Yardie for not only representing all Jamaicans highly with your grace and eloquence but for not lowering yourself to the standards of the ignorance you faced.’

One joked: ‘They were treating White Yardie like Chet Hanks.’

White Yardie has since spoken out about the response to the interview and wrote in an Instagram post: ‘There’s a difference between race and nationality 🇯🇲. This post is not to bring anyone down, the first time on uk tv as a guest which I was there to discuss topics but seem it was more about if me real or fake. I really want to do a documentary.’

Zeze appeared to address the criticism and tweeted: ‘People say the [sic] want to have open and honest conversations. You don’t really. Open and honest will sometimes be awkward or uncomfortable.’

White Yardie also received support from his celebrity friends with Ashley Banjo commenting: ‘This got to me I can’t lie 🤦🏽‍♂️… Nothing but love and respect for the way you handled this interview brother 👊🏽❤️.’

BBC Radio 1Xtra DJ Nadia Jae said: ‘You should never have to be qualified for who and what you are. Eloquently delivered.’

Mistajam quoted the Jamaican motto and wrote: ‘[Out] of many, one people 🖤.’

Unapologetic returns to Channel 4 on Thursday at 11:05pm.