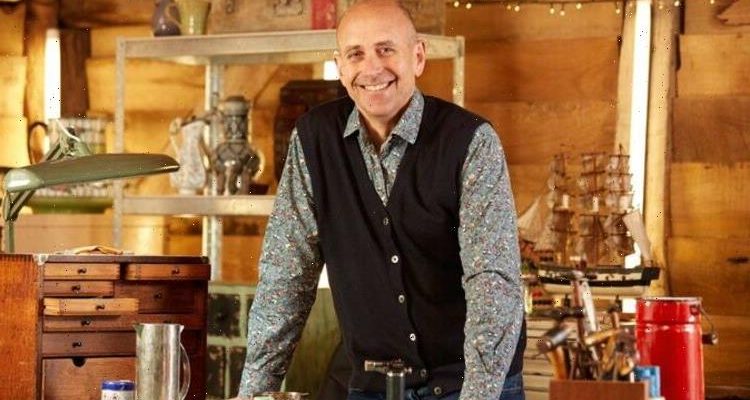 The Repair Shop: Steve excited by steam mechanism of a toy car

The Repair Shop is currently airing repeats on BBC One with season nine expected to start later this year. The heartwarming series sees individuals venture into the famous workshop, in the hope its experts will restore their precious items to what they once were. One of these experts is none other than Brenton West who is the silversmith of the barn.

Brenton West rose to fame, along with the other cast members, in The Repair Shop in 2017.

He specialises in silversmithing as well as allied crafts, obtaining a diploma from the Medway College of Design.

Brenton also has a passion for 19th and early 20th Century image-making which he pursues when he isn’t busy giving silverware a new lease of life.

His skills have also led him to work on the body parts of “historic Formula 1 and classic cars” according to his website’s bio.

Where is The Repair Shop’s Brenton West based?

Brenton West resides somewhere in Oxfordshire, alongside his wife and children.

When he isn’t at The Repair Shop barn, he is conducting work as an antique photography specialist in his home county.

He often shares some of his projects on his social media, with more than 30,000 followers on Instagram and 11,000 on Twitter.

Brenton almost never posts anything to do with his family life so little is known about them.

Back in July 2021, he did post a joke picture of himself next to a dog statue that belongs to his mum.

The caption read: “First day off in a while. Went to chat to mum’s ceramic dog and listen to horribly loud rock vinyl.”

So it is clear from that Brenton has a good relationship with his mum, despite the identity of his wife not being known.

The 58-year-old has previously described his The Repair Shop co-stars as “family”.

Speaking to the BBC, Brenton said: “When I first saw the Repair Shop (I wasn’t in series 1) I thought what an amazing place to work and how I would love to work there.

“When I got the call and arrived to work in the barn I wasn’t disappointed.

“The setting, the challenges, the happiness of the contributors and working with the other amazing experts make it a dream.

The Repair Shop returns for another re-run on Thursday, April 7, at 3.45pm, with another exciting task for Brenton.

The description reads: “The next challenge at the barn is a two-wheeled project for silversmith Brenton West, though it’s not the vintage motorbike that Barrie James arrives on, but the two Isle of Man Manx Grand Prix trophies that he carries with him.

“These two trophies were won by Barrie’s father in the Isle of Man amateur race and always stood in pride of place on the mantelpiece at home.

“Barrie’s father died when Barrie was just 17, but not before sharing his passion for motorcycling with Barrie and his brother.

“The trophies represent one of the greatest achievements of Barrie’s father’s racing days, but over the years they have become tarnished and broken.

“Now Barrie would like them back restored and ready to be put back on display.”

The Repair Shop is available to watch on BBC iPlayer.