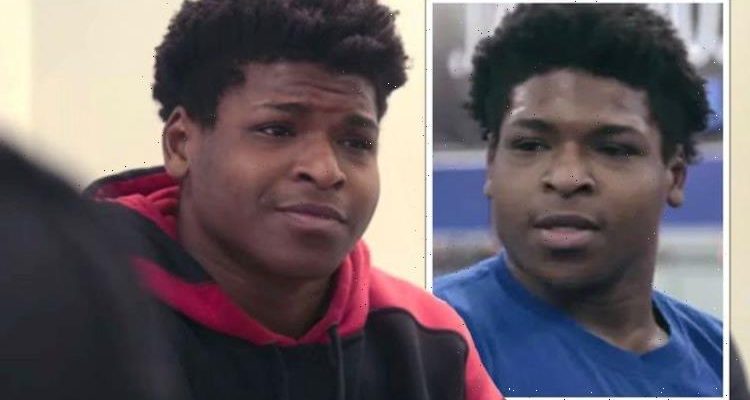 Cheer season two has almost arrived on Netflix and the stars have spoken out about how the debut season changed their lives. The reality entertainment series sparked global cheer-mania but the sudden stardom threatens to alter the dynamic of Navarro Cheer. One of the show’s breakout stars, Jerry Harris, was “facing a 15-year [prison] sentence” as explained in the trailer.

Where is Jerry Harris from Cheer now?

Jerry Harris, 22, received recognition worldwide after appearing in the 2020 series of the docuseries.

He was known for his eccentric personality and became one of the show’s breakout stars.

But in the trailer for season two, it is explained how he faced a prison sentence.

His co-stars are heard saying: “I just can’t even process it right now,” and “everyone just felt lost”.

In September 2020, Harris was charged by the FBI with the production of child pornography.

The star’s representatives have always denied the allegations, with his spokesperson saying: “We categorically dispute the claims made against Jerry Harris, which are alleged to have occurred when he was a teenager.

“We are confident that when the investigation is completed the true facts will be revealed.”

In December 2020 he faced another seven charges, which involved four other minors between August 2017 and August 2020.

Twins claim Harris solicited explicit photos and sex when he was 19 and they were 13.

The second season features accounts from the twins as they speak openly about their side of what happened.

The legal process is ongoing and the former member of Navarro Cheer remains in federal custody without bail at the Metropolitan Correctional Center in Chicago, as of December 2021.

In December 2020, NBC Chicago reported from the District Court in the Northern District of Illinois.

The indictment said Harris had “also been accused of using the internet to knowingly persuade, induce and entice a minor to engage in sexual activity, as well as knowingly receiving and attempting to receive child pornography”.

Further charges include “travelling in interstate commerce, from Texas to Florida, for the purpose of engaging in illicit sexual conduct”.

Harris faces up to 15 years in prison if he is found guilty and convicted of all charges.

His former coach Monica Aldama said she was “shocked and devastated” after the arrest.

At this moment in time, it is not known how much involvement Harris will have in the second season.

However, it has been confirmed the case will be addressed in one of the episodes.

The trailer continued to feature interviews with the other cheerleaders, and they have a lot on their minds.

If Navarro slips up at the next tournament, Trinity Valley could snatch the title from them.

With both teams striving to be the best, they are destined to lock horns along the way.

Fans took to the trailer comments to praise the cast for returning after everything that has happened.

Taylor Key said: “I had no idea that they’d come back after the whole scandal. I’m so happy for them. I can’t wait.”

Yantleee_n said: “After everything that happened, I’m so happy they bounced back.”

Cheer is available to watch on Netflix now.