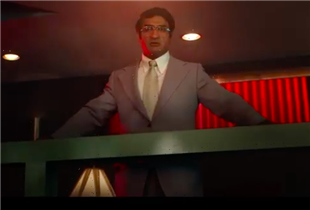 The late November forecast calls for making it rain.

Premiering Tuesday, Nov. 22, the limited series tells the true story of Somen “Steve” Banerjee (played by Nanjiani), the Indian-American entrepreneur who started Chippendales. Across its eight episodes, Welcome to Chippendales will detail “the insane, darkly comedic, crime-ridden saga behind the unique male revue that became a cultural phenomenon,” per Hulu.

Bartlett, who is heavily featured in the above trailer, co-stars as producer/choreographer Nick De Noia, a charming, fast-talking New Yorker who’s certain he’s God’s gift to entertainment. De Noia is responsible for transforming Chippendales from a seedy male strip joint in West LA to the global juggernaut it would one day become. A man of many passions, Nick loves drinking, drugs, women, men (particularly Rannells’ rich-kid investor) — and most of all, showbiz.

Welcome to Chippendales, which was formerly titled Immigrant, is written by Pam & Tommy creator Robert Siegel, who serves as an EP alongside Nanjiani, Dylan Sellers, Emily V. Gordon, Rajiv Joseph and Mehar Sethi.