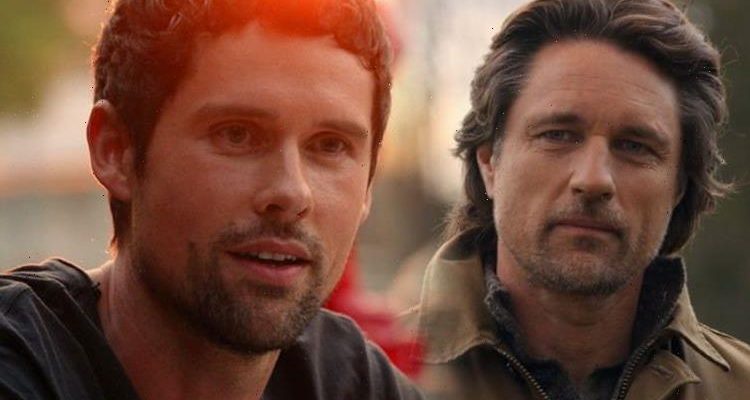 Virgin River season three is on Netflix now and the latest outing provided more insight into Jack’s (played by Martin Henderson) shooting. The third season is set three weeks after the tragic event that took place at Jack’s own bar, and his memory of the incident was hazy. At the end of season three, Brady (Ben Hollingsworth) was found in possession of the potential murder weapon – but did someone set him up?

Who framed Brady for shooting Jack?

In the season two finale, fans were devastated to see the bar owner was shot at his own establishment.

His partner Mel Monroe (Alexandra Breckenridge) arrived just in time and he was rushed off to the hospital, where he stayed for a few weeks.

Although he made a fast recovery physically, his memory of the incident was of great concern to the police.

They had been unable to identify Jack’s killer and this investigation is expected to continue into future seasons.

Jack initially thought Calvin (David Cubitt) was responsible, but he had a strong alibi.

Having started to regain some of his memory, he recalled seeing a man wearing a dark hoodie.

He remembered having an argument with Brady that night, but could not believe his former best friend could take such drastic measures.

Fans saw a more vulnerable side to Brady in season three, as he formed a relationship with Jack’s sister, Brie (Zibby Allen).

Brie almost left Brady after she found out he was one of the suspects for the shooting, but he convinced her he was innocent.

This was until a warrant was issued to search his house, as his alibi had fallen through.

A gun was found in a vehicle outside his home and he was arrested on the spot, in front of Brie.

He was adamant he was being set up and the gun was not his, but nobody believed him.

Calvin is likely to have framed Brady, as he has mentioned getting his revenge on a number of occasions.

Brady was responsible for sharing information about Calvin’s drug empire, and Calvin had threatened to kill Brady as a result.

He made clear Brady’s time would come, but perhaps Calvin felt death was not the best form of punishment.

He may believe a worse fate for Brady would be to spend time in prison for a crime he never committed.

There are plenty of people who would like to see Brady locked up, including their cop friend Mike Valenzuela (Marco Grazzini).

He was leading on the investigation into Jack’s shooting, and he became suspicious of Brady after his alibi fell through.

Mike and Brady ended up in a fight in Jack’s bar, and Mike made a comment about Brady getting locked up.

There is a chance he could have set Brady up out of spite, in order to get him out of the way.

Brady was taken into custody at the end of season three, but he has not been proven guilty just yet.

There is still time for the real perpetrator to be revealed in a potential fourth season.

Fans have taken to Twitter to share their thoughts on the season three finale, with one saying: “I used to hate Brady but he’s kinda been growing on me this season.

“And I actually feel bad for him for being set up for Jack’s shooting #VirginRiver.”

Another said: “Brady didn’t shoot Jack. He was set up by Calvin (but maybe that’s too obvious) or Mike. Mike seemed overly hostile towards Brady for no reason.”