Tyson Fury, 32, joined the This Morning team to talk about his life, mental health, his new book and how people who might be struggling during lockdown could keep motivated. With social distancing measures still in place, the professional boxer spoke to Phillip, 58, and Holly, 38, via video link. And although the interview started off well, the calmness didn’t last long as the device he was speaking on ended up showing a completely different picture to ITV viewers.

Instead of getting to see the professional boxer, those watching at home got a view of his ceiling, prompting the hosts to ask him if everything was okay.

Explaining the technical blunder as chaos ensued, Tyson said: “[My camera] is on a table, but I hit the table with my big hands.

“It one’s of those things you never thought would happen,” the guest told the presenters in the studio.

It seemed the interview was going to continue without any more hitches, but unfortunately, another glitch happened towards the end of the discussion. 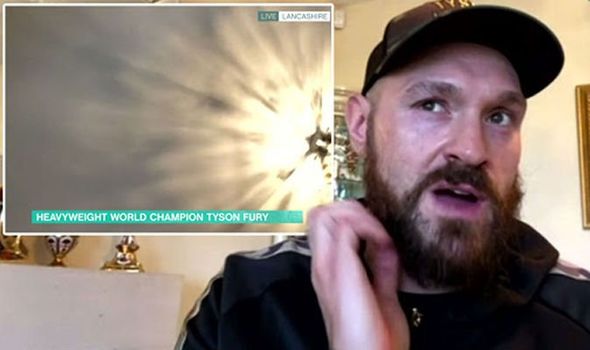 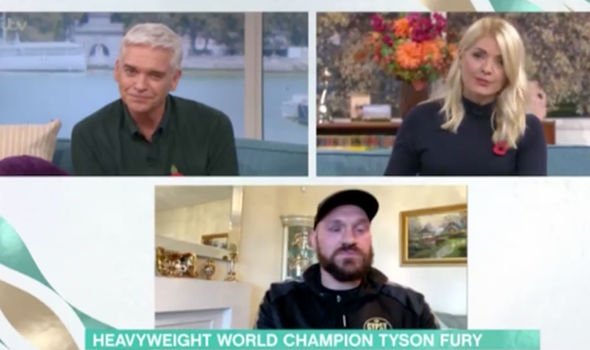 “This is my favourite chat we’ve ever done,” Holly added as the professional boxer tried to sort out his camera angle.

Taking to Twitter, those watching at home expressed their joy at seeing Tyson on screen, with one writing: “What an amazing and inspirational man is @Tyson_Fury #thismorning.”

Another added: “Listening to @Tyson_Fury on #thismorning @thismorning breaks my heart. But so glad he’s still here and trying to help others.”

Whilst a third commented: “Love listening to @Tyson_Fury on @thismorning it’s great to see how well he doing for how low he got! When you feel it yourself it hits home #ThisMorning #mentalhealth #ItsOkNotToBeOk.” 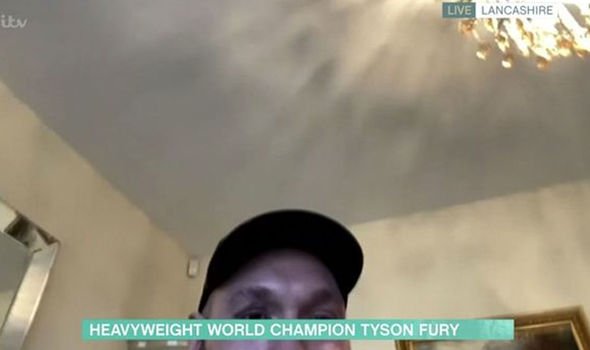 I hit the table with my big hand

A fourth remarked: “@thismorning @Tyson_Fury watching you on #thismorning you are such an inspiration. Thank you.”

Back in September, the professional heavyweight boxer explained how often he was able to train whilst the nation was under lockdown in the Spring.

“When we were in lockdown and allowed to go outside for one form of exercise a day, I was actually training five times a day.

“I’d do two or three sessions in the house or in the garden outside. It was absolutely a crazy time for me.”

“I think I lost the plot completely. I went into over the top fitness mode and I managed to keep the weight down.”

“I was bang on where I was supposed to be and I was hoping this [pandemic] was going to come to an end sooner rather than later,” he continued.

“But, obviously, it’s dragged on and I’m just keeping my fingers crossed and staying positive,” he explained.

“I’m very optimistic about fighting this year,” Tyson added, referring to his match against Deontay Wilder, 35, planned for next month.

The professional boxer has recently written a book, entitled The Furious Method, which hopes to aid readers to reach their goals to transform their mind and body.

Tyson has been promoting the book on social media and his followers are eager to get their hands on the publication.

In reply to his promotional posts on Instagram, one fan wrote: “Can’t wait to get it,” with another adding: “This is gonna be the book of the year.”

“Can’t wait from mine. Ordered it back in May. Looking forward to reading it,” a third follower commented.