With Tom Cruise’s amazing aerial work in the jet fighters of “Top Gun: Maverick,” the actor added another daredevil achievement to his list of movie stunts. But he and the filmmakers had a secret weapon: the innovative Sony Rialto Camera Extension System, which fit six 6k Venice cameras inside the cockpits. With the cameras separated from their sensor blocks, the camera crew were able to reach a new level of photographic realism and IMAX-level spectacle in their bomber mission movie. No wonder the “Top Gun” sequel became an instant global hit over the Memorial Day weekend, delivering Cruise’s biggest opening ever (adjusted for inflation).

Inside the cockpits, the Rialto provided four cameras looking back at the actor from different angles and two looking forward. “It was a multi-cam setup wired to one switch that the actor would flip to get all six cameras going,” director Joseph Kosinksi told IndieWire. “We had two planes flying — that’s 12 cameras, not including ground to air and exterior mounts, heli to jet, and jet to jet.

“One day we had 26 cameras rolling,” he said. “When you have two fast-moving objects, when you have moments when the footage is good, you’re going to get one- or two-second pieces worthy of being in the film. In a 14-hour day, 30 seconds was great. We wanted to live up to what was set by the original film.” Overall, they shot 813 hours of aerial footage, with two hours making it into the final film.

But first both the Venice and Rialto extension had to be put through their separate paces by Kosinski’s go-to cinematographer, Claudio Miranda. They shot with a Venice prototype a year before production in 2017, and made a car commercial with the Rialto shooting inside the vehicle. (The Rialto also makes a nice lightweight, handheld device and was used by James Cameron on “Avatar 2” with the Vision rigged to a 3D stereoscopic beam splitter system.) 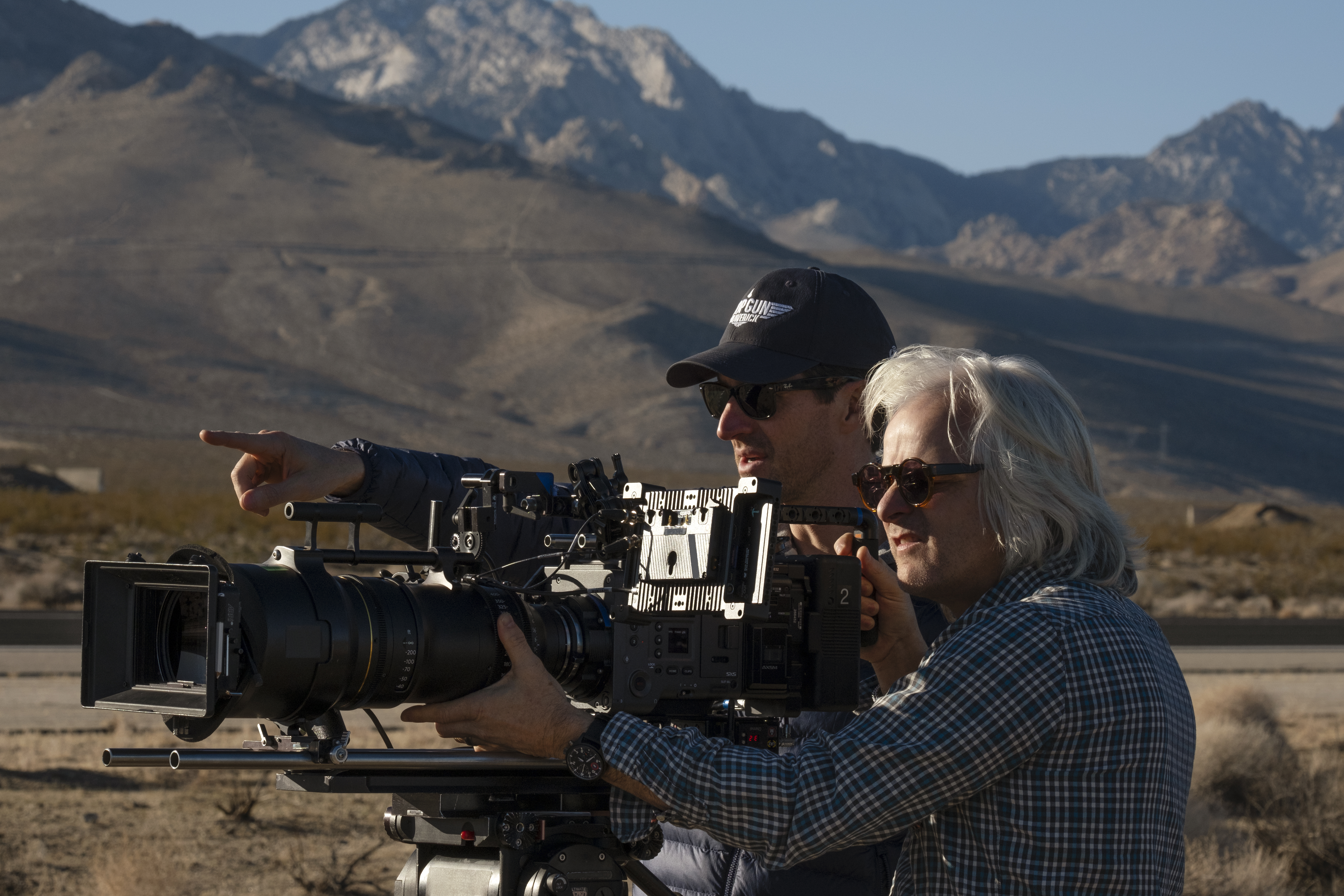 “We did two runs a day — one in the morning and one in the afternoon — and were limited to 90 minutes of air time, so we had to make sure they had fresh batteries,” Miranda said. “But we got the 7.5 maximum g-force for the interior cameras. The way we did the runs was I looked at the maps and at the weather, and I had to figure out which were the best runs to keep them backlit as much as possible.” Because of the interior mechanics of the cameras, Miranda was able to also make changes remotely when the weather turned on them.

“To keep interest in the reality,” he said, “you’ll see sometimes the cameras in the glare field. For me, that’s the whole point of this.” Because of the tight fit, though, the cinematographer kept to spherical lenses, yet there wasn’t enough space in the cockpits for the raw recorder to capture 6K. Instead, they captured 4K. “But it was still full frame [which made it IMAX-compliant],” Miranda said.

Meanwhile, directing the actors under these intense conditions was a new experience for Kosinski. “It’s like making a play,” he said. “You create the performance in rehearsal and then it’s performed. We would start every day with a two-hour brief, where we would sit with all the Navy aviators, actors, me, Claudio, [editor] Eddie Hamilton. We had a big monitor and went over every shot of the day, every storyboard, every piece of previs, every line of dialogue. We’d talk about the altitude of the jet, the terrain, the maneuver, the line, the eyeline, where the sun needs to be. It was laborious but necessary, with safety being the most important consideration.” 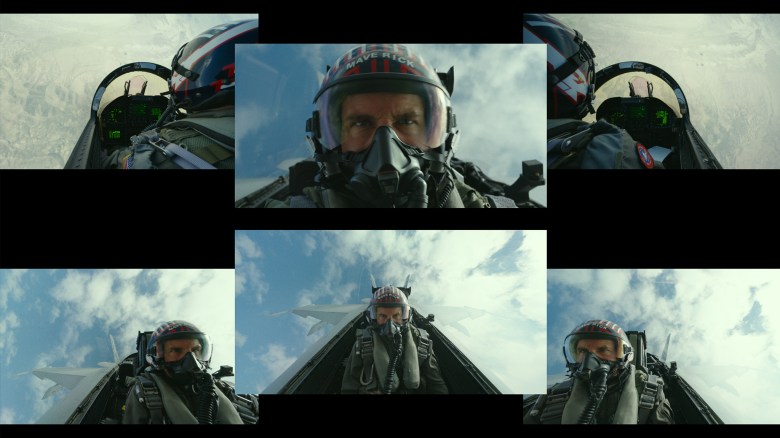 The view from the camera array during a flight sequence of “Top Gun: Maverick”

Then they would rehearse in a wood mock-up of the F-18 cockpit in the hangar and review all of the steps, including camera switch, gauges, camera positions, and sound check. The Naval aviator sat in the front seat, the actor in the back seat, and Kosinski was next to them. They played the scene, checked the eyelines, and the director gave notes on performance for about an hour until everything was in sync.

“And then we’d go to the jet, get them in, send them off, and they’d shoot it, come back, take the chips out of the six cameras, load them into the monitor, and we’d instantly watch everything they did. All the other actors watched as well, and it was a group experience. We did that for months.”

The genesis of the impossible bombing mission — to attack a uranium-refinement facility of an unnamed “rogue state” — came from a meeting with the Navy, in which Kosinski asked: “What’s the hardest, gnarliest, scariest mission you could ever imagine having to do with a Naval aviator?” They then proceeded to compile all of the best ideas into the script: “Carrier launch, low-level ingress, through a canyon defended by SAMS, on a target that’s jammed GPS, hit the target with a buddy laser system, and you’ve got a pull at the end, and another SAM array waiting for you, and enemy aircraft patrolling the skies,” he explained. The only idea they didn’t use was performing the mission at night because it was visually uninteresting.

If that sounds a lot like the assault on the Death Star at the end of “Star Wars: Episode IV — A New Hope,” you’d be half right. The other inspiration was the World War II drama “The Dam Busters” (1955), whose depiction of Royal Air Force missions had its own influence on the climax of George Lucas’ 1977 blockbuster. “You need that sense of speed,” Kosinski said of the sequence, which was shot in the Cascade Mountains of Washington. “It takes the ‘Top Gun’ aesthetic and flips it on its head for the last third of the film, which I really liked. We’re getting the audience out of the San Diego vibe and thrusting them into something completely different.”

As for Cruise, he insisted on going out for an extra flight to get the bombing raid just right. “Tom was adamant,” Kosinski said. “The weather was perfect and he was afraid that if it got foggy the next day, it would never look as good. So he did three flights in one day until they ran out of light, and at 7:30 he came back into the briefing room, exhausted.

“He slumped into his chair, and put on his Ray-Bans. I asked: ‘Did you get it?’ And he said, ‘We crushed it.’ And we put it on the monitor and he did.”