Writer-director George Miller’s 2015 action extravaganza “Mad Max: Fury Road” is already considered a classic of its genre less than a decade after its initial theatrical release. So how does a filmmaker follow a movie that Edgar Wright described as “the best action film of all time” and that an Empire magazine poll anointed “the greatest movie of the century”?

For an artist like Miller, there was really only one choice: to strike out in an entirely different direction, which is what he did with his dazzling new fantasy film “Three Thousand Years of Longing.” Miller first bought the rights to the film’s source material, A.S. Byatt’s short story “The Djinn in the Nightingale’s Eye,” in the late 1990s, so for years he moved back and forth between it and “Fury Road.” “One was a palette cleanser for the other,” Miller told IndieWire, explaining that by working on both he was better able to retain his objectivity about each project. “It’s very important that you be as objective and neutral as possible when you are assessing something as you’re directing.”

Listen to the full episode below, or read on for excerpts from our interview.

You can listen to the full discussion above, or via subscribing to the Toolkit podcast via Apple Podcasts, Pocket Casts, Spotify, or Overcast.

It’s easy to see how the two films were, as Miller put it, holidays from each other. “With ‘Fury Road,’ very few words are spoken,” Miller said. “[With ‘Three Thousand Years of Longing’] I had to think in terms of something that is highly verbal. One film was shot outdoors in a very isolated place in South Africa; the other was shot in Sydney, mainly in studios.” Miller had planned to shoot more of “Three Thousand Years of Longing” on location in Istanbul and London, but COVID forced him to alter his plan. “We had all the actors and prepared the locations, and then we couldn’t travel.”

By employing state of the art digital technology, however, Miller was able to place his actors in environments where they would never have been allowed to shoot, like the Topkapi Palace in Istanbul. “You can do all that sort of thing very easily now. A couple of decades ago that was not available to us.”

Indeed, the scale of “Three Thousand Years of Longing” feels as large in its way as anything Miller has ever done, even though a large portion of the film concerns only two characters: academic Alithea Binnie (Tilda Swinton) and the magical Djinn (Idris Elba) she sets free from his bottle. That’s because Miller is so good at using his own imagination to spark that of the audience; it’s hard to think of a movie that so beautifully expresses the liberating, exhilarating force of great storytelling. 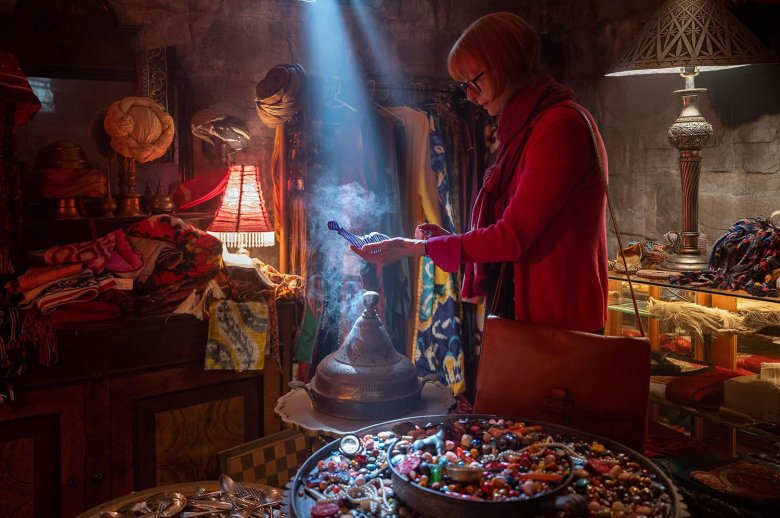 The desire to explore the nature of stories and to tell a great story himself motivated Miller throughout the process of directing “Three Thousand Years of Longing,” particularly when it came to the visual effects. “It’s got to be very story driven,” he said. “It’s not just surface design. That applies to everything you do in a film, it’s not just a matter of fancy.”

For Miller, the core ideas at the heart of Byatt’s story were irresistible. “It’s a conversation [between] two people in a hotel room, but it spans 3,000 years. It also deals with the basic question of what is real and what is not. What is desire and what is contentment? What is love? How do you define love? What are the gestures that make it clear to you that there is love? One of the characters is mortal and the other character can live indefinitely. What are narratives, what’s the connection between mythos and science? She explains that mythos is what we knew back then, science is what we know so far. They are part of a continuum. All of those things were inherent in the story and I couldn’t let it go.”

The Filmmaker Toolkit podcast is available on Apple Podcasts, Spotify, Overcast, and Stitcher.