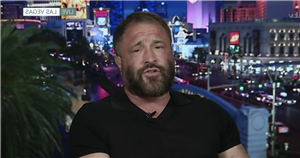 But he hadn't always been the star he is today, as he said he was always "the shy kid" with a "bad haircut" at school.

"My first jump into the business was kind of into the deep end. You've got the big elaborate crew with the cameras and the trucks and the lighting," he explained to hosts Phil and Holly.

"I guess I did pretty well because they said, 'Hey, you know, you've got a knack for this, you've got to stick with this.'"

And his parents' reaction was "interesting", to say the least.

"I think people find their parents are fruitier than they think. My parents were viewers of that sort of thing, but it was a bit of a shock," Miles said. Miles allegedly "stopped counting" how many people he has bedded since first arriving in the industry – but reckons it's definitely more than 4,000.

The star says he has been married three times but is currently single – and wants to "settle down" in the future.

But viewers were gobsmacked by his impressive number of notches on the bedpost, and swarmed to Twitter to share their shock.

One penned: "4000 women over 20 years. That's about one a day taking away weekends and holidays."

"Someone's slept with 4000 women, did he? #ThisMorning," someone else posted.

An impressive feat indeed considering the amount of Covid-19 updates!

And it appears he's making a success of his new venture.