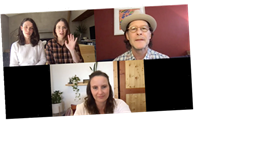 For job seekers in El Paso, Texas, one well-paid option is in law enforcement. The city sits on the U.S.-Mexico border and teems with officers from the border patrol, ICE, DEA, the Texas state police, the local police department and sheriff’s department. Plus there’s the FBI and the Bureau of Alcohol, Tobacco, Firearms and Explosives.

Teens who want to get a jump start on that career can study law enforcement in programs across Texas, including one at Horizon High School in the El Paso area. Horizon’s program and three of its students are the subject of At The Ready, premiering in U.S. Documentary Competition at the Sundance Film Festival.

“We met these students, they all had different, compelling stories that they were all open to sharing,” director Maisie Crow said during an appearance in Deadline’s virtual Sundance Studio. “We really wanted to look at the world through their eyes during this time and in this program.”

The students got training in no-knock drug busts and active shooter situations. Many in the program are Latino, with family ties across the border in Juárez, Mexico, and some began to feel ethical qualms about getting a job that might involve cracking down on undocumented immigrants. That was especially true for one character in the film, Cristina Martinez.

“You really see her develop a bigger sense of the national conversation that’s been happening all along that maybe was a little out of reach there because she was living in it locally,” producer Abbie Perrault noted. “But as these topics intruded across the national conscience, of these migrant caravans and child separation policies emerging, I think she’s really forced to reckon with some of the deep complexities that come with picking a career like that and whether she wants to steel herself and go forward.”

“One thing I really admire about the young adults in the film is that they’re thinking critically about these topics,” observed producer Hillary Pierce, “about how they affect their own lives and their own families and it’s really kind of refreshing to see, and it’s [also] difficult to see them wrestle with those things.”

Crow, Perrault and Pierce are all Texas-based filmmakers, giving them a strong foundation to make At The Ready.

“I think that knowledge and understanding is very important in terms of telling the story,” Crow commented.

“As Texan storytellers we do understand the nuance and maybe the unexpected aspects of some of the people you meet down here and their perceptions of things and their beliefs,” Pierce added. “And I think it is important to be somewhat local to the story…to tell it authentically and to tell it with an open mind.”

Watch the full conversation in the video above.