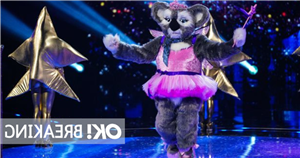 The Masked Singer and I'm A Celebrity… Get Me Out Of Here! joined forces for a one-of-a-kind special episode on Sunday night.

During the standalone show, the hit ITV singing competition had a jungle makeover to celebrate IAC's return to its original Australian camp for the first time in two years due to the pandemic.

Bushtucker Trials were swapped for "extravagant and utterly bonkers outfits" as four masked celebrities attempted to conceal their identities using disguises such as a "witchetty grub" and "kangaroo" in a bid to be crowned the winner.

The panel made up of – Jonathan Ross, Rita Ora, Davina McCall and Mo Gilligan, who were also joined by guest stars – had to guess who could be behind the mask.

While host Joel Dommett, who finished in second place on I'm A Celebrity himself in 2016, was back to present the ITV extravaganza.

Taking part in The Masked Singer meets I'm A Celebrity special were past campmates disguised as Kangaroo, Witchetty Grub, Cockroach and Koala as they went head-to-head in a bid to be crowned the winner.

And during the show, Koala was crowned the winner and revealed as Vernon Kay, who appeared on I'm A Celebrity in 2020. Earlier in the show, Witchetty Grub was revealed as This Morning star Alison Hammond, who appeared on the show in 2010.

Later, Cockroach was revealed as Russell Watson, who appeared on I'm A Celebrity in 2020, leaving the panel stunned over the discovery.

Elsewhere, Kangaroo was unmasked as X Factor icon Sinitta, who appeared on I'm A Celebrity in 2011.

Taking to Twitter, one person said: "Vernon Kay was so good #maskedsinger." While a different viewer added: "omg vernon kay absolutely killed that he was so passionate lmao #maskedsinger #imaceleb."

I'm A Celebrity…Get Me Out of Here! starts on Sunday 6 November on ITV at 9pm.