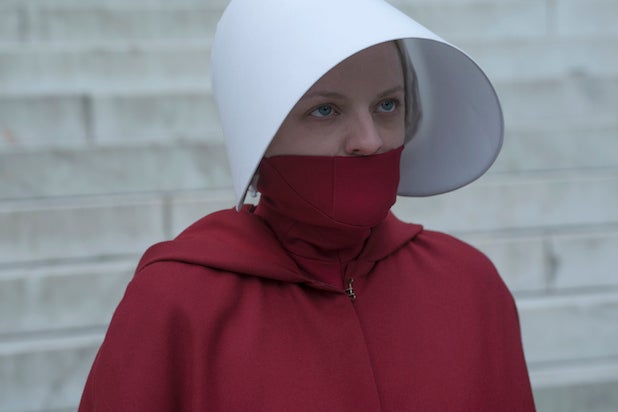 (Warning: This post contains spoilers for Episode 306 on “The Handmaid’s Tale,” titled “Household.”)

Irony hit “The Handmaid’s Tale” hard on Wednesday when June (Elisabeth Moss) traveled to Washington, D.C. and lost her freedom of speech in the process — literally.

In the closing moments of the episode, titled “Household,” our heroine stands before 150 other Handmaids on the National Mall, now wearing the same red covering over her mouth that adorns those women, while Fred (Joseph Fiennes) and Serena Joy (Yvonne Strahovski) lead them all in a prayer for baby Nicole’s safe return to Gilead.

Don’t worry, creator Bruce Miller told TheWrap that new addition to the costume is actually “super comfortable.” However, June’s fight with Serena over Gilead’s mission to get baby Nicole back from Canada — at Serena’s request and against June’s wishes — which takes place at the vandalized Lincoln Memorial moments before this harrowing shot, was anything but.

“I think she ends up in a place at the end of Episode 6 where she doesn’t know what the hell she’s gonna do,” Moss said. “She doesn’t know. She doesn’t have a plan anymore. And all she knows is that in Gilead, this potentially is GTMO now, which is a shocking concept that there could be a worse version of Gilead. And there is a ticking clock now. She doesn’t have as much time as she thought. And her capability of making any sort of movements and being able to literally communicate and use her voice is potentially going to be taken away from her.”

Executive producer Warren Littlefield told TheWrap the episode’s quiet cliffhanger following that blowup between June and Serena marks a “critical” turning point in the Hulu adaptation’s third season, because Serena can’t let go of *her* daughter (given to her by Gilead, but actually June’s baby), and June is trying to force the Canada government to keep the infant. And this is all after June thought they might be on the same side once Serena handed over Nicole in the Season 2 finale so June could give her to Emily to take to a better life in Canada.

“What we thought earlier in the season was a uniting of June and Serena Joy was happening with June pulling Serena Joy out of a burning household and all,” he said. “And they seem to be united. It’s just that it all kind of changes over Nicole because there is something very primal that kicks in for Serena Joy in her desire to get Nicole back. And Fred has a desire to get Serena Joy back. And so Fred, because for Fred it’s more than just about the goals of Gilead it’s also kind of about Fred, so Nicole becomes weaponized and she becomes this political bargaining chip between Gilead and Canada. And that plays out I think to great dramatic effect. So it’s a pretty powerful storyline that motivates both sides and continues throughout the season to be a pretty, pretty critical element, as well as June’s journey to help others.”

Miller and Littlefield were cagey when it came to details about the rest of the season, but did tease the important role Commander Winslow (Christopher Meloni), his wife Olivia (Elizabeth Reaser) and the D.C. setting will play from here on out.

“Fred is aspiring to be like Winslow, this very dominating man,” Miller said. “Everything about him is focused on having that superior position on the other person. He flirts with Fred to put him back on his toes a little bit, ’cause everything he does is about dominance. So Fred kinda wants to be that. And for Serena, the idea of a house full of children, she can’t even breathe she’s so excited. So I think they’re like this aspirational couple for our couple, but we do get to see the troubles and tribulations that the Winslows go through in a really interesting way. Let’s just say you don’t want to get on their bad side.”

Littlefield added: “Winslow is even more powerful than Fred, and so we come to see what that looks like. And in this episode, we take iconic visions of Washington, D.C. such as the Washington Monument, and we turn them into a piece of Gilead. So it is a cross instead of a pillar. And when we go to the Lincoln Memorial we see that that too has changed, that old Abe is not there and that has been reshaped in the world of Gilead. And we’ll see more of that.”

And in case you were wondering, yes, they really did shoot that at the National Mall, and you can read more about that here.