One of the most compelling aspects of the third season of The Handmaid’s Tale is its gradual expansion of Gilead’s power structure beyond its regimented, puritanical facade. Christopher Meloni’s High Commander Winslow, first introduced in the Washington, D.C.–centric sixth episode, represents a level of power—and therefore a level of privilege—beyond anything we’ve yet to see on the show. It’s evident every moment he’s on-screen.

Winslow and his wife (Elizabeth Reaser) are introduced alongside their mind-boggling gaggle of children, who amount to a status symbol in a world where fertility rates are dramatically dwindling. Additionally, Winslow’s overly intimate behavior toward Fred Waterford (Joseph Fiennes) led many viewers to wonder whether he’s gay and powerful enough to not fear reprisal in a world where “gender traitors” are regularly hanged. But this week’s episode saw Winslow’s arrogance cost him his life during a chance sexual encounter with June (Elisabeth Moss) at Jezebel’s.

Last week’s episode saw June counseling Commander Lawrence (Bradley Whitford) through the Ceremony by teaching him her coping mechanisms: “Treat it like a job.” This week, she finally reaches her breaking point. When Winslow tries to rape her in a private room at Jezebel’s, she stabs him to death with his own pen. A sympathetic housekeeper aids her flight from the club, and a group of Marthas clean up the murder scene and incinerate Winslow’s body, making his death like a disappearance. It’s a deeply cathartic moment that also represents a profound shift in June, who’s now taken a life for the first time.

Meloni sat down with BAZAAR.com to discuss the ambiguity around Winslow’s sexuality, how he differs from every other commander we’ve seen on the show, and his “satisfying” demise at June’s hands.

What did you know about Commander Winslow when the role first came to you?

I knew nothing! All I knew was that he was going to be a power player, as all commanders are, but even more of a power player because his power emanates from the federal source in Washington, D.C. I figured that he’s a goal for Waterford to be climbing toward, a representation of a greater power outside of what the characters have been living, and what the audience has been introduced to. But the most telling thing I knew was that Winslow has got five kids.

That first scene, where the Winslows are introduced followed by all of their children, is pretty breathtaking.

It tells you a lot. In a society where one of the main sources—if not the main source—of value and social status is in fact children, here’s a guy who’s like the modern-day billionaire who collects pieces of art. He’s the guy who hoards the gold. He can’t have enough of whatever the currency is, whatever the thing is that gives you status. I thought that was kind of a wonderful perversion and a fascinating starting message for who this guy is. 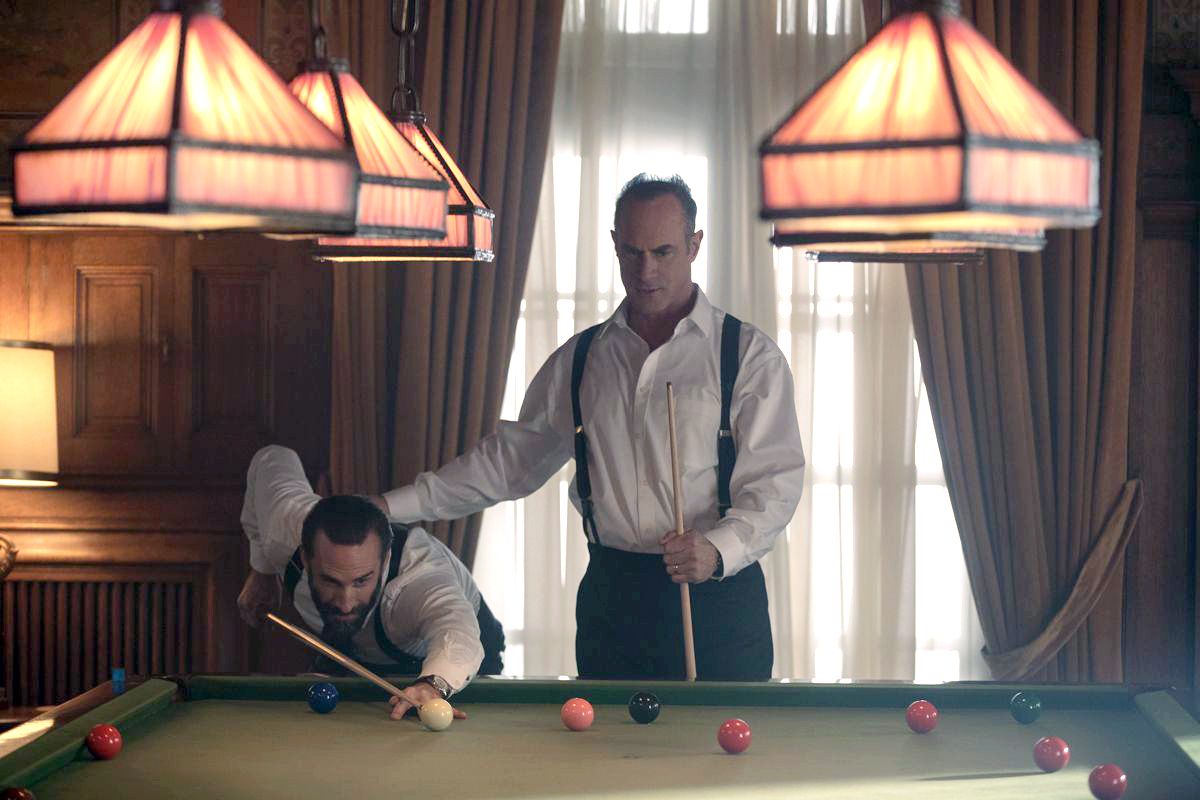 [Laughs.] Whether you want to call it Easter eggs or bread crumbs, I just thought there was something to play there. The action [in the script] is just, I put my hand on Waterford. And I thought, This is a man of great appetite, and there’s also a sense that this is how things work when you have absolute power. Things are not what they seem to be, and there is a corruption and a perversion of norms. I’m not saying that to be bisexual is a perversion, of course, but that this person is not authentic. You’re propping yourself up to be one thing, and the truth is that you are something else. That was an interesting duality to get into with Winslow.We’ve seen Waterford in the position of power so often that it’s interesting to see the tables turned, where he was made to feel pursued and uncomfortable.Exactly, and suddenly he’s in the position of having to question, “How far are you willing to go now, to get what you want? You’ve wielded your power to subjugate others, but how do you react to being subjugated?” When I read that line in the script, that I put my hand on Waterford, I thought it tied into something about Winslow that was really clear in all the action lines. When the children all come in and I allow them to climb all over me, we’re purposefully showing that I’m a different kind of guy. Every other commander that I’ve seen on the show is very uptight, very linear, kind of always looking over his shoulder: “Am I doing this right? Am I pretending the right way? Am I doing this by the book, the Gilead way?” And all of a sudden, you have this guy who couldn’t give a shit about any of that stuff, because there’s no need to. My power is assured. It’s as though I’m the final arbiter of what Gilead is and how these muckety-mucks are allowed to behave and express themselves.

Commander Lawrence has a line in Episode 10 about how “there are always exceptions that can be made” for commanders. The fact that Jezebel’s exists just reinforces that.

Yeah, and Winslow with his ease and his ability to be physical and touch people, there’s a sense that I can basically get anything I want. I can have anything I want, anytime I want, in a way that’s not true for other commanders we’ve seen.

Which makes it incredibly satisfying when June butchers him! Did you know your arc was going to be this short?

[Laughs.] I didn’t know that exactly, but I knew I wasn’t redirecting the ship! I liken it to when I did True Blood—I knew my days were numbered. They introduce you as kind of a provocative character, a character who’s going to make somewhat of a splash, and then part of that shock would then be to get rid of him. And that’s satisfying, hopefully. 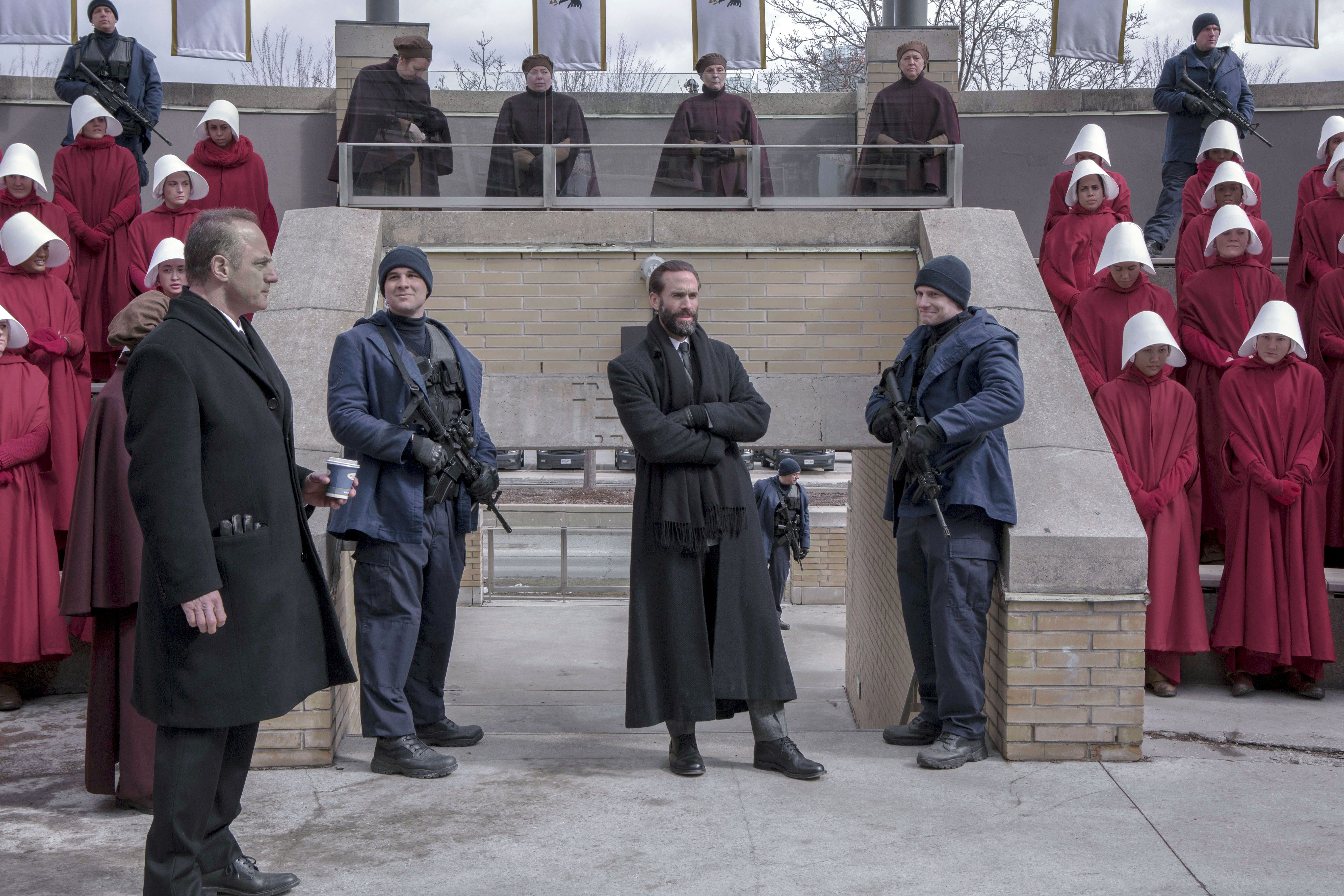 It’s definitely satisfying, especially because it’s such a turning point for June. What was it like to play that moment with Elisabeth?

It’s always so much fun to work with her, because you get to act a lot with what is said versus unsaid. She’s very adept at saying a million things with her face, and I like that. I like working in that way, with an actor who really understands that aspect of it, so that you’re basically having all these scenes underneath and in between the words that are coming out of your mouth. And I must say that I found it very satisfying for her as well to be stabbing me with my own pen! I was like, “Finally! Girlfriend’s getting a whack at the piñata!” And also his final demise [being incinerated], I found that very satisfying. It’s like it’s a group effort to burn this motherfucker!

His last line is so interesting too: “My children.”

I found that so layered, because that’s usually the final plea for sympathy, the idea of, Oh, the children, that’s something that a person would connect to. And in this instance, for June, I think it’s the opposite. It’s like, “Fuck you, you mean the children you stole?”

It’s the worst possible thing he could say to her!

Yeah, she’s like, “You deserve another stab for that one!”

It’s also interesting, earlier in the scene, that Winslow wants to take June from behind. Did that connect with the ambiguity around his sexuality in your mind?

You got me there. I didn’t think of that, I just thought it was a part of the dehumanizing element. But that’s a great point. So many of the moments with Winslow are about possibilities and different interpretations. What do all the children mean? What does the touch on Waterford mean? There was also a scene where I’m speaking with the Waterfords, up in that beautiful penthouse room they’re staying at—and I don’t know how they cut it, I didn’t see the episodes yet—but I was flirting with Serena, right in front of her husband. I don’t know whether they used it, but afterwards, Yvonne [Strahovski] overheard me talking to someone else about it and was like, “Wait, that’s what you were doing yesterday?” Because it wasn’t in the script. I was like, “Yeah, he’s trying to get in your pants!” I liked the different ways you could read that power play. There’s this voraciousness that Winslow has that can never be expunged. He’s just constantly looking for something to conquer.