Chickie Donahue (Zac Efron) is already deep in his self-appointed wartime mission when someone finally calls it what it really is: “the dumbest thing I ever heard.” By then, the part-time merchant marine and full-time screw-up is already in the middle of Vietnam and its war. The next step is embracing the idiocy of what’s he done while coming out of the whole damn thing alive.

Peter Farrelly’s “The Greatest Beer Run Ever” is his first film since he won Best Picture for “Green Book,” a film embraced by audiences and maligned by critics. This one hits many of the same beats as that divisive feature, though with a lighter touch that strives more boldly to marry his comedic sensibilities and the reality of a painful history.

Like “Green Book,” “The Greatest Beer Run Ever” is a broad historical outing based on real people and real events, condensed down into an essence that can only be billed as “crowd-pleasing.” The trick this time: Farrelly seems far more aware of how he’s playing fast and loose with history to offer a zippy feature to a fractured world. Dare we say it: It works far better.

The ace up his sleeve is a never-better Efron. As one character tells Chickie late in the film, his heart is solid gold, but it’s his brain people need to worry about. Like many Americans in the late ’60s, Chickie doesn’t know exactly why America is at war, but he sure as hell knows he supports it and his many friends who have been carted off to Vietnam to, uhh, maybe fight the Commies or something? Meanwhile, his close-knit Inwood community keeps losing good boys — all of them “dying heroes” — and his sister Christine (Ruby Ashbourne Serkis) is protesting the war around the neighborhood.

Down at Chickie’s local joint, a cozy pub owned and operated by The Colonel (an unrecognizable Bill Murray), he and his pals hit upon a wild idea: Wouldn’t it be great to show our boys we support them by showing up in Vietnam and giving them an ice-cold American beer as thanks?  No one actually expects anyone to do it, except Chickie. After his own friends and family express their disbelief that knucklehead Chickie (of all people!) would execute any scheme that required a modicum of forethought, the New York native can’t take it anymore.

As he declares to the local dudes at the bar, he “could, would, and will” take on this insane mission. Well, as Hemingway so sagely put it, always do sober what you said you’d do drunk. Such is the theme of “The Greatest Beer Run Ever,” which speaks to its kicky title and Farrelly’s comedic bent before easing Chickie into hell and letting him sort it out for himself. 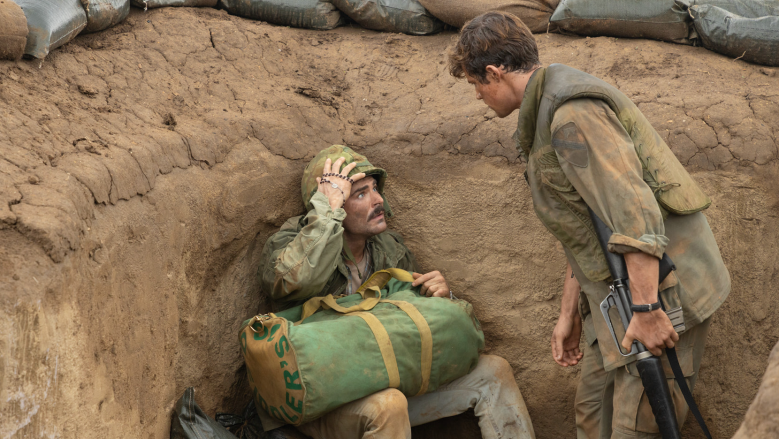 “The Greatest Beer Run Ever”

“The Greatest Beer Run Ever” is not a gritty war picture; it’s glossy and entertaining and often fun. Farrelly struggled to unpack racism in “Green Book,” but this time he’s got a story that requires both blind faith and nutty optimism. With a number of twinkly-eyed moments that hinge on crazy fate and “Forrest Gump” coincidence to spare, Chickie sets off for Vietnam. Farrelly, Brian Hayes Currie, and Pete Jones’ script condenses much of the real Donahue’s insane quest, cutting down a four-month “beer run” to four days, but the choice keeps things moving and obscuring hard truths with fast-paced movie magic.

Efron moves subtly from wide-eyed to shell-shocked as he meets local cop “Oklahoma” (a heartbreaking Kevin K. Tran); Lt. Habershaw, the military lackey who is convinced Chickie is CIA (a very funny Matt Cook); and a grizzled war reporter (who could only be played by Russell Crowe). Chickie bobs and weaves around the country, hopscotching across frontlines and cozy barracks, slowly realizing that he knows nothing about this war or about real life. An ice-cold PBR sounds nice, but all he’s doing is delivering lukewarm cheap beer to people doing the real work.

The journey leaves Efron’s Chickie filthy, exhausted, and fearing for his life, but “The Greatest Beer Run Ever” never relinquishes its glossy exterior. For some viewers, that distance between straight-up entertainment and the Tet Offensive may be a bridge too far. No one tries to call Chickie a hero, least of all Chickie, and while his mission might have been noble-ish (let’s call it noble-adjacent, but definitely reckless and unnecessary), it’s just a different way of looking at the war. When Chickie returns home — not a spoiler, how the hell else would this story be revealed? — he’s got nothing but bad news to deliver.

So did the beer help? Enough to make a shiny biopic and remind everyone that war is hell and no one should forget it. There’s not enough beer in the world for that.

“The Greatest Beer Run Ever” premiered at the 2022 Toronto International Film Festival. AppleTV+ will release the film in select theaters and on its streaming platform on Friday, September 30.