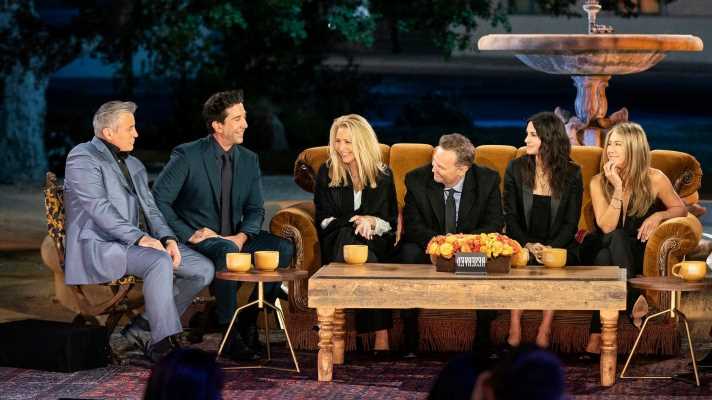 There’s no better way to spend an afternoon than with our “Friends.”

The long-awaited, much-hyped reunion between the six original cast members of “Friends” hits HBO Max Thursday, and longtime fans of the NBC sitcom will be more than pleased to see it. Courteney Cox, Lisa Kudrow, Jennifer Aniston, David Schwimmer, Matt Le Blanc and Matthew Perry finally gathered together for a sweet, emotional reunion on the Warner Bros. lot this spring. And while many viewers were hoping to see them in character again as Monica, Phoebe, Rachel, Ross, Joey and Chandler, this loose, unscripted format for the reunion is far better than any scripted revival would have been.

“Friends: The Reunion” gathered all six actors on the set of the hit 1994-2004 sitcom chatting and reliving emotional moments. The reminiscing is mixed with an interview on the famous orange couch between James Corden and the cast; interviews with creators David Crane, Marta Kauffman and Kevin Bright; cameos from famous guest stars; celebrity guests dishing about their favorite episodes; fans from around the globe talking about how the show changed their lives; clips from old episodes; bloopers; and, in a surprising and lovely touch, the actors re-reading some of the old scenes together.

Produced and directed by Ben Winston, who also happens to be Corden’s “Late Late Show” producer, the special felt effortless and crisp. Editing kept the 105 minute  reunion going, although some segments could have been cut to make it snappier, such as random celebrities like BTS and Malala Yousafzai talking about the series. Although it’s lovely to hear Mindy Kaling discuss how much she enjoyed watching Monica and Chandler hide their relationship in Season 5, it was far more enjoyable when the cast cracked up reading the scene in which Phoebe sees them having sex.

Unexpected moments like that, beyond rehashing the history of the show and how each actor was cast, that made the special, well, special. It was able to recreate the magic of “Friends” without pretending that 17 years haven’t passed since “Friends” left NBC.

The real draw of the reunion is right in the title – seeing Cox, Schwimmer, Perry, Le Blanc, Aniston and Kudrow together again. The segments that pulled the focus away from the six were the clear weaknesses. The moments where they got to show off their chemistry as a group and reminisce most naturally were the strengths. Perhaps the funniest moment was Kudrow attempting to fend off a bug that flew into her hair, a bit of screaming and flailing that reminds fans of her talent as a physical comedian.

Of course, no celebrity event of this magnitude can get away without some “revelations.” The big news that comes out of the special, which HBO Max has asked reporters not to reveal before it streams, felt canned and rehearsed. But they will certainly be fodder for gossip blogs and fan discussions.

The special was unscripted, yes, but it was also carefully orchestrated. No mention of controversies, of Le Blanc’s failed “Joey” spin-off or the stars’ personal lives and challenges. It’s not necessarily a bad thing, because the reunion is as much a fantasy as it is unscripted TV. Except for a few errant masks, viewers could easily forget that this was shot during a pandemic. The palpable sincerity of many involved could also make viewers forget that the reunion is a canny bit of corporate synergy, an event designed to lure subscribers to Warner Bros.’ streaming service, HBO Max, which took reruns of the comedy from Netflix.

But the “Friends” devotees from several generations likely won’t care why the six of them got back together. Much like the chemistry between the cast helped smooth over bad jokes or the poor later seasons of the show, their chemistry as real-life friends makes the reunion an easy sell.