We all make mistakes, even Toni Collette. Fans of the fearless and versatile Australian actress can take solace that she isn’t alone on this one; a whole host of beloved talented people cast their lot with the same sinking ship that is the cringe comedy “The Estate.” Circumventing any “so bad it’s good” potential by a wide margin, “The Estate” is a half-baked farce about a ragtag bunch of middle-aged cousins jockeying for favor from a wealthy elderly aunt in her final days. The most consistent comedic thread in “The Estate” involves a pushily flirtatious cousin, and it’s not nearly as fun as “House of the Dragon” made it look.

In an odd couple pairing, Collette and Anna Faris play sisters Macey and Savanna, who are struggling to keep their family business afloat. When they learn that their wealthy and childless Aunt Hilda (Kathleen Turner) has taken a  turn for the worse, scheming Savanna suggests they ingratiate themselves to her in the hopes of securing their inheritance. Though kindhearted Macey has reservations at first, the threat of losing her first decent boyfriend in years to a faraway promotion clouds her judgement. Because maybe if she’s rich, she can support him enough that he won’t need the promotion? Like everything in the movie, the logic is paper thin.

Pulling up to Aunt Hilda’s ramshackle mansion in their rusted beater, they are shocked to be greeted by goody-goody cousin Beatrice (Rosemarie Dewitt) and her hangdog husband James (Ron Livingston). Apparently, the sisters aren’t the only ones who had the brilliant idea to charm Aunt Hilda before she croaks. The real-life married couple spend most of the movie bickering bitterly, with Beatrice playing the one-dimensional nagging wife to James’ beleaguered buffoon routine.

A jolt of the wrong kind of masculine energy arrives with lecherous cousin Richard (David Duchovny), who wryly proclaims “I prefer Dick now,” speaking of his new moniker. Apparently, Richard has been enamored with Macey since childhood, and spends the rest of the movie hitting on his cousin shamelessly. His silliness is rivaled only by Macey and Savanna’s eccentric little sister Ellen (lovable “Curb Your Enthusiasm” weirdo Keyla Monterroso Mejia), a D&D obsessive who stays out of the action until she’s needed at the last minute. If it all sounds like a child making up familial relations for an inconsequential game, that’s what it plays like, too. 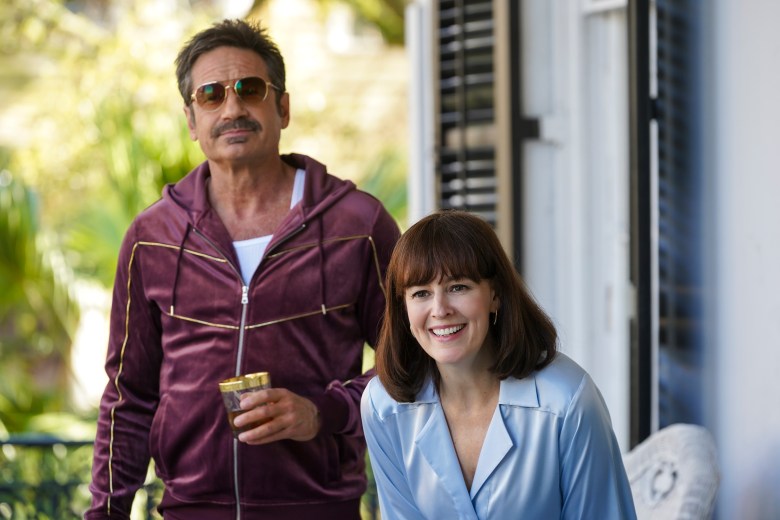 With nary a plot point in place other than this broad premise, the competitive cousins jockey for Aunt Hilda’s favor, fighting over who gets to driver her to the doctor or fluff her pillows. When the brassy old broad reminisces about an old boyfriend and how long it’s been since she’s felt a man’s touch, Savanna has the idea to get her laid one last time. If the sisters can be the reason she finds love in old age, perhaps they can edge out the others from the will.

The sisters manage to track down Aunt Hilda’s high school sweetheart Bill Dunther (Danny Vinson), whose name she utters with a mix of reverence and lust at dinner one night. Life hasn’t been as kind to Bill, whom they find living in a halfway house for sex offenders. Though Macey wants to abandon ship, she is eventually is swayed by Bill’s assurances that it was nothing too bad, like rape or anything, just a few flashing charges. Bill and Hilda’s reunion goes far too well, however, and soon they are engaged. A marriage would upset the flow of inheritance for everyone, and soon all the cousins are uniting to frame Bill for indecent exposure.

“The Estate” was written and directed by English screenwriter Dean Craig, who is best known for writing the screenplay for the 2010 comedy “Death at a Funeral.” Directed by Frank Oz in a rare misfire, that film was generally seen as a slapstick farce that wasted talented actors on weak material. Flying solo over a decade later, Craig seems to have done it again. (Though he was aided by executive producers Marc Goldberg and Sarah Jessica Parker, who should have known better.)

It takes truly terrible script to make such charming and accomplished comedic actors seems so wooden and lifeless. Though many of these actors exude charisma, hereit doesn’t even seem like they like each other. An obvious play at appealing to different audience tastes, Faris and Collette are a total mismatch, hailing as they do from entirely different genres and worlds apart in skill. The only possible reason for doing the film is that it puts women front and center. But it “The Estate” is the best that women of a certain age can hope for, Hollywood is in a sorrier state than any dying old bag.

A Signature Entertainment release, “The Estate” will hit theaters on Friday, November 4.