Welcome to My Favorite Moment! In a new week-long series IndieWire spoke to the actors behind just a few of our favorite television performances of the year about how the onscreen moment they are most proud of came together.

All of those are present in the sequence in Episode 5 that takes place at the sunlit Theranos office. Holmes’ impromptu dance to the Lil Wayne song “How to Love” became one of the memeworthy moments of “The Dropout.” But for all the unexpected oddities of that moment, Andrews is an anchor that keeps that scene from being a goofy curveball in the midst of a focused character study.

Not only is the dance a pretext for one of the pivotal Elizabeth-Sunny conversations in the entire season, it comes right before Elizabeth gets some sobering family news: Her uncle has just died. Yet, even in that charged moment, Andrews’ incredible delivery of “Who is Uncle Ron?” is “The Dropout” in miniature, showing powerful people completely oblivious and unaware of the circumstances of anyone outside their own immediate sphere. It’s drama and humor that gets darker the longer that you sit with it.

And, as Andrews explained in a recent interview with IndieWire, the scene surrounding it almost played out in a very different way.

You certainly have plenty of choices of scenes from this show that are pivotal for Sunny. What was it about this one that stood out to you?

It turned out to be everything that I wanted it to be already in the script. And at the same time, it was unpredictable. It shows you how it’s made in the editing room. The Lil Wayne song was shot on both sides, where we were both singing verses to each other. So you saw Sunny doing a verse to her. Having seen the finished scene, I realize that it would have been too much. I mean, it’s so close to the edge anyway. You want to be laughing, but because it’s really uncomfortable. It’s such a fine balance. You’re not playing it for comedy, because it’s not fucking comedy. It’s very dark. [laughs] It should be horrifying, in the right way.

When you read this scene in script form, what was the first thing that you as a performer latched on?

I fucking hate a lot of that music. I’m old. I can’t relate to it. There are other people who might enjoy it. It’s suitable for the piece for obvious reasons, I hope.

So the first thing I did was tried to familiarize myself with the tune, so you can lip sync it. You could maybe sing it if you want, to get the pauses and rhythm. And then, because I’m English, I look at dramatists like Dennis Potter, who use music where the characters would actually be lip syncing whole songs for dramatic purposes. So it has to come from a real place. That’s what I tried to do. Also for Elizabeth and Sonny, it’s their song. ‘They’re playing our song, darling.’ 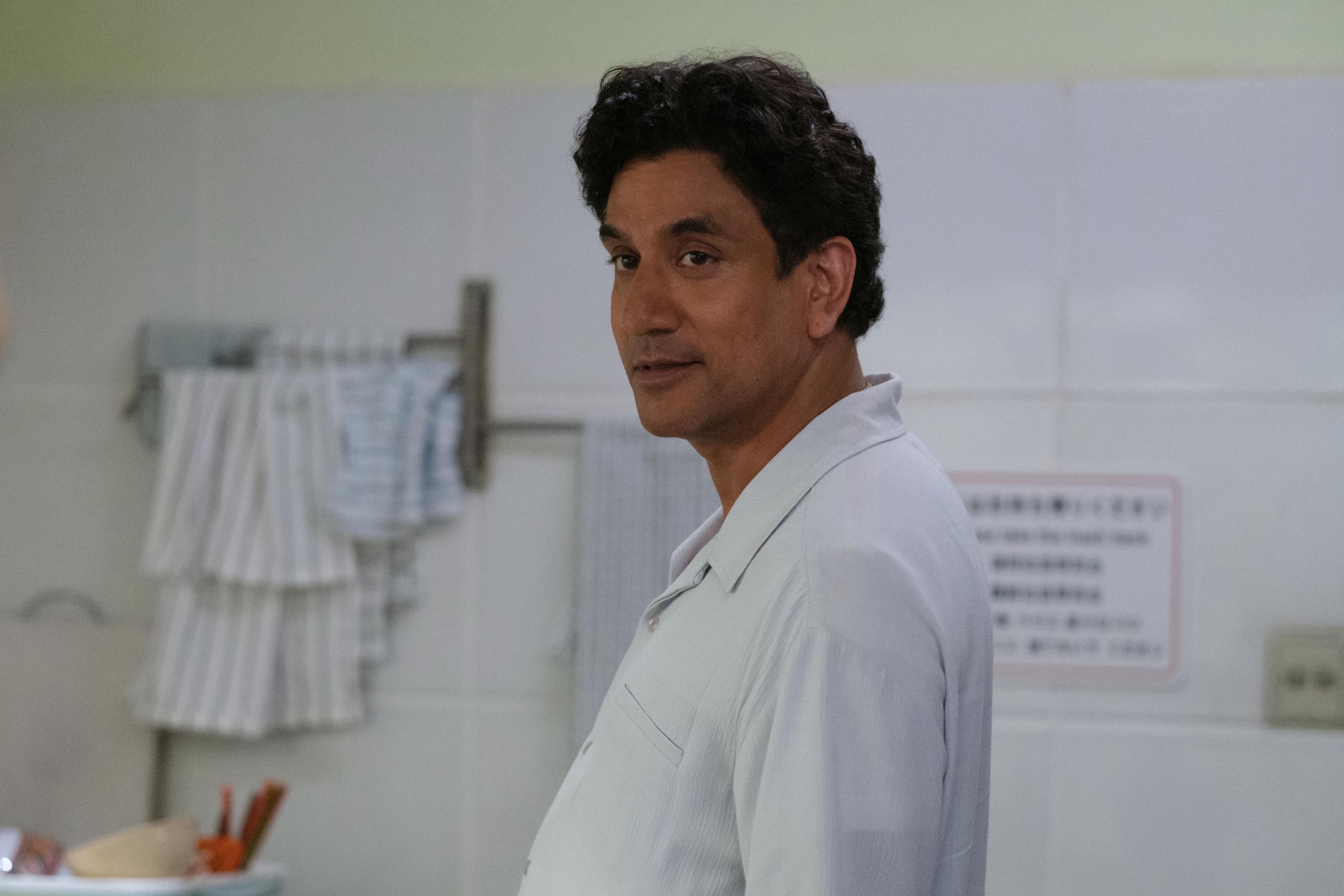 I can’t speak for Amanda, but I find acting hard. It’s not easy. And there’s so many different levels that you have to be aware of, particularly when there’s subterfuge and intimate partners concealing things from themselves. The way we played it was, at the end of the song, the screens are coming down outside, so that they’re going to make love. Of course, that doesn’t happen. It doesn’t happen for a reason, which is why I feel this scene is important. For the first time, Sunny wants the truth. He’s able to articulate that it’s not fucking working. “Are you really there for me anyway? Why am I here? What am I doing?”

And it all seems to work in terms of the writing and where the characters were at that particular point. What they’re doing to Stephen Fry’s character is driving him towards his death. But they’re completely fucking oblivious. And that’s where it gets, if I may say so, Shakespearean. They’ve reached this point like that line from “Macbeth”: “I am in blood steeped in so far” and to go on would be tedious.

At this point, they’ve essentially convinced themselves that they’re gods, so it makes sense that they would be callous with other people’s fates.

What kind of world are they living in? I mean, again, the scene expresses that very well with the screens coming down. It’s just them. For Sunny, my whole throughline for this character was that he was besotted with her. Hopelessly besotted. The best thing that ever happened to him. And obviously the worst. We know that, but not him. The way she moves towards him, it’s so ungainly, and spasmodic. To me, it’s terribly unsexy, not sensual at all. But he’s looking at her like she’s the goddess Aphrodite, drifting and gliding across to him. I believe he’s still in love with her. I could be wrong, but that’s just my guess.

That makes it even more telling that his first reaction to hearing the song is still, “I can’t believe we’re doing this right now.”

‘Not tonight, Josephine.’ For both of us, and I think this has been said, we couldn’t approach these people as human beings with any kind of judgments or any preconceived notions of morality we might have as people about what’s reprehensible and what isn’t. This is one of the few places where you see his vulnerability and humanity at that point, all things considered.

To perform that entire scene sitting down takes away some of the physicality that you can bring. What does that do for you as an actor, when you are physically forced into one position and can’t really move?

It can be a huge advantage. Physically — how can I put this — he doesn’t resemble me as I am, I suppose. So you’re aware as an actor of what weight might do to you, what it’s like to carry weight, how you move. I wanted him to have a kind of rigidity that was ever-present. Even when he is apparently relaxing, he’s too rigid. Once you’ve got to that place, you’ve tried to make that as real for yourself as you possibly can during that four months of shooting. It gives you a lot of freedom. You don’t give a fuck about how you look. [laughs]

Given that the original version was so different, it seems like there was a lot of room on the day to discover other things that also might work. How much did you and director Francesca Gregorini talk about having the space to find those different choices, if they felt right?

There was always that on this particular show. Sometimes on the day itself, we would get new dialogue, because of texts that had been sent between the two that came out in court the night before. So again, you have to be ready for it. But it also put us in a unique position, because there’s a certain kind of confidence that comes from, ‘Well, they actually said this.’ As ridiculous as it may sound. Who says, ‘I love you, Tiger’? I mean, we should all be so lucky. 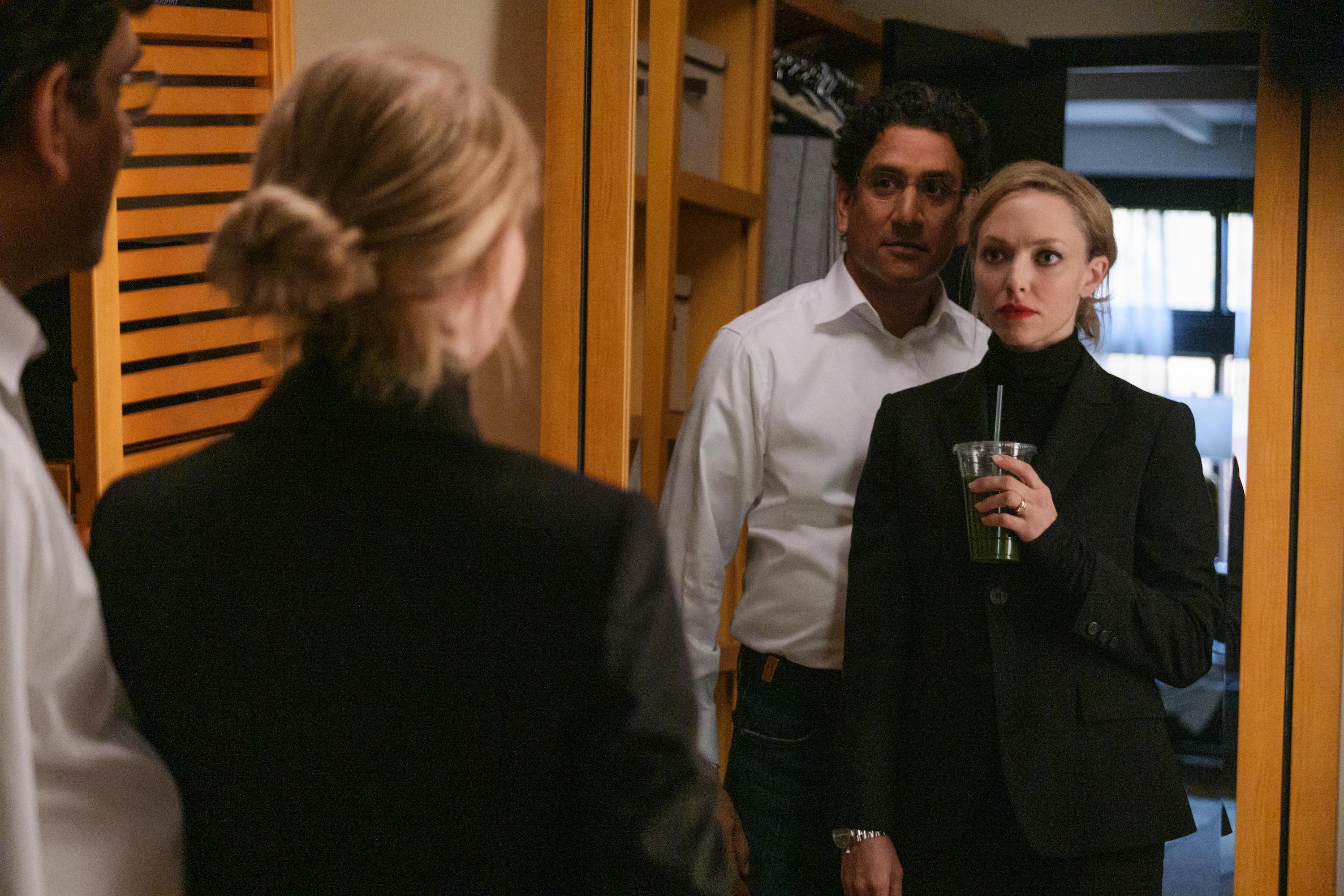 It’s not completely specific to this scene, but your hair and costume seem like fundamental parts of Sunny. How much do those elements help you get into a certain headspace?

I can’t emphasize it enough, going over costumes with Claire [Parkinson]. And I put on 20 pounds to make my face heavier. But for the belly growing at different stages, all that’s invaluable in charting where your character is. When they meet in China, he’s noticeably slimmer. Some people age well, some people don’t. You have the luxury of exploring why this character perhaps seems a little bit more middle-aged.

I was born in 1969. He was born in ’65. That’s four years’ difference. Maybe I’m completely wrong and flattering myself, but if I saw him in the street, I think of him as an older geezer. So it’s hugely important, in terms of where you can go psychologically with these people. And it helps you when you’re in the trailer, before you go to set, when you’re literally putting on wardrobe and checking the bulge. It sounds funny, but all those things are so important, and they were also for Amanda. I remember when she was in her 19-year-old outfit, and we were doing camera tests. I was doing mine and then she came up behind me dressed as Elizabeth with the black turtleneck and the eyes. It was chilling, but electric.

It’s essentially a cameo at the beginning, since she puts it down before she starts dancing. But it seems like the green juice might have served a similar purpose, too.

Without being too flowery, how can I say this? It’s like the elixir. When she’s in the mirror as Elizabeth, it’s almost like putting on armor before battle. Then he comes with the green juice and hands it to her. Something that was initially rejected is accepted.

There was something you know, almost messianic in the effect that she had on other people. A conscious creation of iconography, if you like. And he was the best disciple. He was Harvey Keitel’s Judas Iscariot to Willem Dafoe’s Christ.

Amanda and showrunner Elizabeth Meriwether have talked about how you were able to show an intimacy between these characters through different means. This scene seems like a significant part of that.

We did have four days of rehearsal before we started shooting, which were invaluable. These things came up: What kind of sex life do they have? And in a way, those things sort of become pedestrian because of what’s already the script. I mean, there’s a sleeping bag. Sleeping bag. To me, that’s giving you volumes of information. Volumes. You don’t have to delve.

Then we had to find an intimacy about why they were bound together. It came from a place of safety, and the sense that they feel safe together. The only way to do that was, and me and Michael Showalter and Amanda all said, this has to come instinctively. This has to happen on camera when we do it. Either it’s there or it isn’t. We both felt it would happen organically, hopefully. Our first day of filming was the scene when she’s been shot at in the car and she calls him and he comes to her. And it just happened. That was our first day.

Now having gone through this scene, did the song at least grow on you a little bit? Did you come around to liking it?

Of course! [massive grin] It has this kind of idiotic catchiness, I suppose.

“The Dropout” is now available to stream on Hulu.