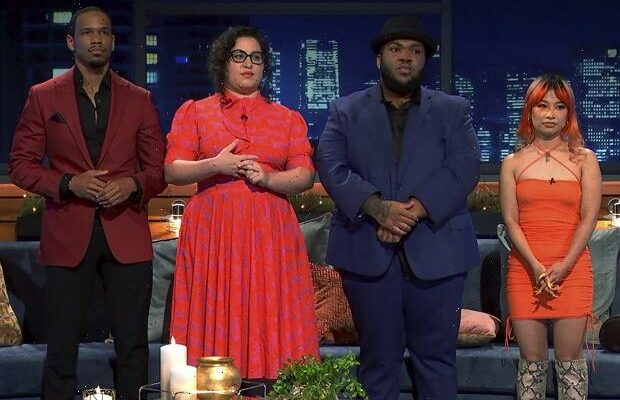 And then there were six in the Season 4 finale of The Circle.

As the Super-Secret Influencer, Frank needed to decide the next person to be blocked, also determining the season’s final five. After going back and forth between Eversen and Nathan, Frank chose to block Nathan (whose real name is Alex).

Before leaving the game, Alex met Yu Ling, with whom he’d been flirting while faking it as a 22-year-old frat bro. They both found the humor in their flirtatious conversations throughout their time in the Circle and deduced that Frank must have been the Secret Influencer who blocked him.

At the final dinner, everyone was shocked to learn that Trevor, aka Imani, was a catfish. He wasn’t allowed to come into the Circle as himself, since his wife Deleesa won after playing as him in Season 2.

The final rankings went as such: Eversen in fifth place, Rachel in fourth, and Yu Ling in third. Then it came down to the final two, Trevor and Frank, with Frank crowned this season’s winner. Thanks to Spice Girls Emma and Mel B., who fooled contestants with their children’s author catfish profile, the prize money increased from $100K to a whopping $150K.

Were you surprised by who won The Circle Season 4? Grade the finale below, and then let us know your thoughts in the comments.