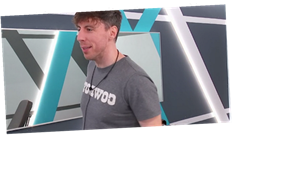 The Circle fans were sent into meltdown on Monday evening as James aka Gemma revealed his true identity to Andy.

Gladiators star James has been masquerading as Gemma in the game in order to gain favour with the rest of the players – but the sudden blocking of real player Tally left him with a guilty conscience.

Over the past few episodes, many players have become suspicious that Gemma is a catfish and, after a particular bonding moment with family man Andy, James decided it was time to come clean.

"I’m kind of bursting to get out of the guise of Gemma," said the bodybuilder.

"I need to get my suit of armour back on and be me, rather than be a young, professional woman."

Later in a private chat with Andy, who is a genuine player, James penned: "I have to say, after the last few days, the only person I really trust is you. I’ve really been thinking about what you said about integrity the other day.

"It’s been on my mind non-stop. I feel you are my only true friend, so there’s something I want to tell you.

"It’s true I’m here to raise money for the NHS but I didn’t want to be judged for who I truly am.

"Most of what I’ve said is absolutely true, some of it a slight spin on the truth, and some of it false.’"

Andy was genuinely shocked as 'Gemma' concluded: "I'm putting my future in The Circle in your hands, and it’s up to you what you do with the information."

James went on to explain all about why he decided to be Gemma leaving Andy in a state of confusion.

Viewers at home were left gobsmacked as James decided to let Andy in on his true identity.

Taking to Twitter, one fan penned: "As weird as it sounds I think Gemma/James/Hunter’s short term tactic makes sense as she is probably saved from next blocking.."

A second person posted: "Was it wise for James/Gemma to tell Andy he was a catfish or not? Especially considering he told him he was really Hunter from Gladiators?"

Another added: "Why is James/Gemma/Hunter revealing his true self to Andy? I don't get the reasoning."

Elsewhere in the episode, The drama is heated up as Tally got to meet one player before she left the flats after Friday's blocking.

She decided to visit fellow 'geezer gal' Manrika, who threw her under the bus in the last ratings.

Tally told Manrika that there were no hard feelings between them both and they enjoyed a glass of Prosecco.

The Circle airs Sunday to Thursday on Channel 4 at 10pm