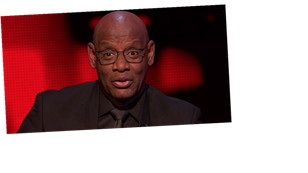 The Chase presenter Bradley Walsh poked fun at Shaun Wallace during the latest edition of the ITV quiz show.

Shaun "The Dark Destroyer" Wallace was in the hot seat on Thursday trying to prevent the hopefuls from going home with the cash prize.

The team of four all took it in turns to take on the cash builder and later went head-to-head with The Beast in an intense round of general knowledge questions.

Bea was the first player to take on tough quiz show and managed to sail though to the final chase after Shaun made a blunder during the tense head-to-head round.

Bradley yelled: "What? I've known you for many years and that's the most ludicrous answer I've ever heard" after the quiz champion answered "Whippets" to one of the questions.

Viewers at home also rushed to their keyboards to discuss Shaun's major mishap.

Taking to Twitter, one fan penned: "Whippets? Is Shaun having a giraffe?"

While a third added: "I can't breathe at #TheChase. Whippets? Oh dear."

Bradley took the chance to poke fun at The Dark Destroyer after Bea made it home safe and dry.

"You've let yourself down with the whippet answer," Brad told Shaun.

Contestants Kelly, John and Twon also made it though to the final chase.

The team played against The Dark Destroyer for a share of £13,000 in a dramatic showdown.

They scored 20 questions correctly but it wasn't enough as they got caught by Shaun with one second remaining.

The Chase airs weekdays on ITV at 5pm