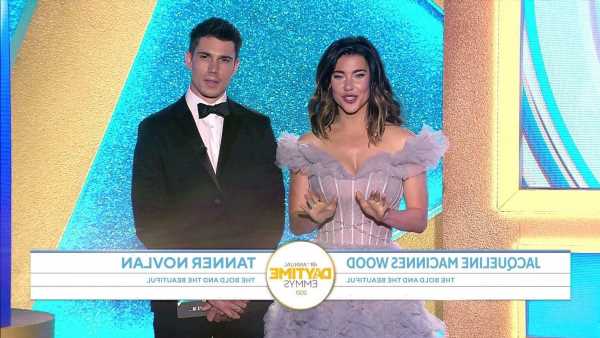 Dr. John “Finn” Finnegan (Tanner Novlan) sent The Bold and The Beautiful community buzzing with his debut in July 2020. As the new husband of Steffy Forrester (Jacqueline MacInnes Wood), he’s become a leading man. Although Finn is a good-looking guy, some fans question his intelligence. Even Novlan admits his character is foolish at times.

When Finn debuted as the new love interest for Steffy, The Bold and the Beautiful viewers were thrilled. The fans thought of Finn as a breather from Liam Spencer (Scott Clifton). However, recently support for Finn has diminished due to his actions in the Steffy and Sheila Carter (Kimberlin Brown) storyline.

Despite Steffy’s warning, Finn remains in contact with his mother. Finn’s actions have not only riled Steffy but also fans. During an interview on the Directionally Challenged podcast, Novlan chatted with his wife Kayla Ewell and co-host Candice King about his character.

“Here’s the thing with Dr. John Finnegan. He’s my buddy, he’s my friend, he’s with me, but he does a lot of stupid things that he really shouldn’t be doing,” the actor explained.

Finn being manipulated by Sheila Carter

Ever since the revelation that Sheila is his mother, Finn’s been daughter between a rock and a hard place. On the one hand, he wants to obey his wife’s wishes. But at the same time, he wants to know Sheila and learn about his past.

Finn’s already gotten on his wife’s wrong side several times. The first incident involved him letting Sheila visit baby Hayes (Piper Harriot). That was enough to stir up Steffy’s fury and kick Finn out of the house. Although the couple made up, Finn’s connection with Sheila remains a big issue.

Finn’s been warned about Sheila’s history, yet that hasn’t deterred him from wanting her in his life. With Steffy unable to understand his side of the situation, Finn has no choice but to continue seeing his mother in secret. Yet, he may realize soon that everyone is right about Sheila’s manipulations.

Will he fall for his mother’s latest plan?

Sheila loves creating destruction wherever she goes. Poor Finn is caught in the midst of his mother’s latest scheme. Together with Deacon Sharpe (Sean Kanan), Sheila is plotting to push Finn with Hope Logan (Annika Noelle).

Finn and Hope formed a friendship as they bonded over their parents. Yet, Finn confiding in Hope isn’t going over well with Steffy. With Steffy and Liam forbidding their spouses from seeing their parents, Sheila’s already succeeded in creating tension. Now, if she could get Finn and Hope together, her dream of a perfect family will be complete.