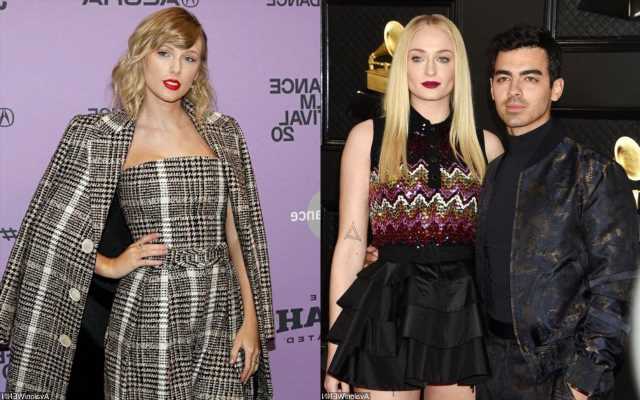 In addition to the married couple, Taylor’s bff Selena Gomez, Blake Lively and her husband Ryan Reynolds support the ‘All Too Well’ hitmaker during her ‘SNL’ gig.

AceShowbiz -There’s no bad blood between Taylor Swift and ex-boyfriend Joe Jonas. When the pop star performed as a musical guest on “Saturday Night Live“, the one-third of Jonas Brothers and his wife Sophie Turner came to support the “Red” hitmaker on the show.

When taking the stage of the Studio 8H on Saturday, November 13, Taylor performed the 10-minute version of “All Too Well”. She looked stunning in black ensembles that she completed with a hot red lipstick.

Joe and Sophie were not the only stars who attended Taylor’s live “SNL” taping. Her longtime best friend Selena Gomez, Cara Delevingne, Anya Taylor-Joy, Blake Lively and her husband Ryan Reynolds were also in attendance.

The A-listers later joined the “Red” artist at the after-party, which took place at New York City hotspot L’Avenue. Sadie Sink, who stars in “All Too Well: The Short Film” alongside Dylan O’Brien, was also present.

Taylor and Joe began dating in July 2008. The relationship didn’t last long with the DNCE frontman reportedly ending it over the phone in October the same year. Despite the split, the two remain friends.

Taylor herself is also a good friend of Joe’s wife Sophie. The two female stars even showed love for each other in April after the Grammy winner released “Mr. Perfectly Fine (Taylor’s Version)”, which many believe is about the “Camp Rock” actor.

At that time, the “Game of Thrones” alum posted the Spotify listing of the song and wrote, “It’s not NOT a bop @TaylorSwift.” In response, the “Cardigan” songstress made a reference to the English native’s character on the HBO show, saying, “forever bending the knee for the (queen) of the north.”

While Joe and Sophie are happily married, Taylor has been dating Joe Alwyn for years. Unfortunately, the 30-year-old actor was absent at Taylor’s recent celebration since he’s now in Panama, filming “The Stars at Noon“.