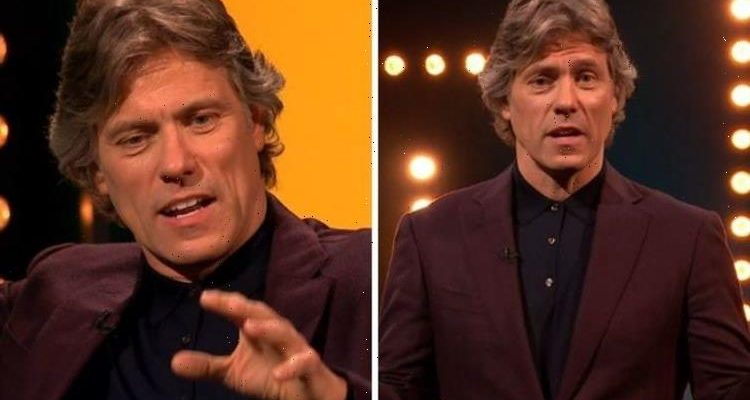 On Saturday night, the Doctor Who star made his debut with his ITV show called The John Bishop Show. During the 45-minute programme, the comedian performed his stand-up routine and chatted to guests James Nesbitt and Sarah Millican.

However, at the beginning of the programme, the 55-year-old faced backlash from viewers after he opened the show with a series of jokes.

“Thank you, and welcome to The John Bishop Show,” the comedian began.

“This is a brand new show as part of the ITV line-up.

He joked: “Ant and Dec were dressed like two little hitmen.

“Whereas the contestants’ Will and Kathryn looked like they were about to go on holiday.

“Let’s be honest people are going to get confused as it’s going to look like the royals had a really good day.

“It’s going to say, ‘Ant and Dec have just given William and Kate £5million’.

“Today they did announce we don’t need to get a fourth jab,” he added.

“But we do need to keep wearing masks which is great news for ugly people.

“And listen it’s been like that for the last 18 months, there’s been ugly people moving amongst us.

“Once you wear a mask everyone looks the same.”

“I am looking around this audience and I’ll be honest with you, it’s like doing a gig at a hen do in Riyadh,” the comedian joked as he referred to the people wearing masks.

John’s stand-up routine sparked outraged among viewers, with many branding the joke about mask-wearing as “racist”.

Taking to social media, Tony tweeted: “JohnBishopShow The audience must have had a good warm-up act. This show is absolute rubbish. Bishop opening the show with a racist joke was disgusting.” (sic)

Shannan raged: “I’m switching over, this is boring.”

While Eva added: “That joke about women wearing veils was tasteless & unnecessary.

“I had almost forgiven him for the racist joke he told at a Labour Party Conference comedy night: one he told claiming it wasn’t racist because he didn’t understand why it was.” (sic)

“Massively unfunny so far,” CC commented as Paul tweeted: “I do like John Bishop.

“A funny man. But #JohnBishopShow is awful. Who’s idea was that s*** sad song sketch? Whoever it was, should never work again.” (sic)

However, some viewers were loving the show, as Carolyne tweeted: “If you released 55, I’d buy it!! Not laughed so loud in quite a while!!” (sic)

Serena said: “If the John Bishop album was actually for sale I would buy it it’s so funny.”

“15 minutes in and people talking it down already!! Get real it’s not that bad at all,” Arty said defending the show.

Express.co.uk has approached ITV and John Bishop’s rep for comment.

The John Bishop Show is available to watch on the ITV Hub.