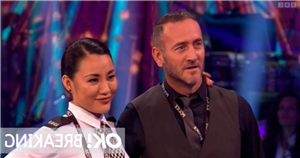 Strictly Come Dancing star Will Mellor had a spectacular return to form on Saturday 22 October evening as he danced his way to an impressive score of 32 just one week after being at the bottom of the leaderboard.

Will had previously muddled through last week after suffering from a serious virus during rehearsals, with the performer clearly unwell during his time on the show.

However having recovered, Will returned on Saturday back at his best, as he performed a Viennese Waltz to the Line of Duty theme with his professional partner Nancy Xu.

“You were back on form!” Anton Du Beke exclaimed, just moments after the performance concluded.

“Your general performance was terrific. You’ve got a lot of good qualities there, great frame, good intensity,” he added although he did point out one error during the performance.

Craig Revel Horwood was also a big fan of the performance, as he weighed in on Will and Nancy's dance by saying: "I absolutely loved the fact that it started like an aggressive tango and you kept that momentum all the way through – back with a vengeance!”

Shirley Ballas however urged Will to remember to pace himself, as she said: “I loved the performance. I loved the fact that you give it your all, but remember, if you push too hard and you go off balance, you’re going to struggle.”

It wasn't just the judges that were impressed either, as several fans also rushed online to praise the couple for their performance after last week's dancing disaster.

"One of my favourite theme tunes because it’s so dramatic. These two always bring the drama! Will came back with a bang for sure. I like how every dance is character-driven but sometimes it overpowers the dance," commented one fan.

Another agreed, adding: "Will and Nancy though… I really like their partnership. He also owns his mistakes, apologises and shows his passion."

"Will is amazing! Fantastic dance great stuff 9 from me!" quipped another viewer.

It comes after the man behind a website which leaks the Strictly result each week has defended his actions.

The results show is recorded on Saturday night and aired almost 24 hours later, on Sunday evening, each week.

David Thorp has run the 'Strictly Spoiler' for years and caused upset for show bosses. This week, judge Anton Du Beke spoke out and complained that the leaks get on his nerves – but David has since hit back at the professional dancer.

While some may get annoyed at the repeated leaks, David argued that that he's "providing a service" and that there is an "appetite" for viewers to know the result as soon as it's available.

David, who as leaked the results every weekend since 2012, told MailOnline: "I'm just providing a service and am not spoiling anyone's enjoyment.

"I don't put the results for everyone to see and they have to search for my site to find out the results. There is an appetite from people who want to know the results before Sunday.

"It could be argued that the BBC is to blame for recording something which is of massive interest the day before."

David went on to insist that he does not have a "source" working on the show, but receives tips from audience members there on the night.

He also gave insight into just how many people view the result on his website, claiming it was viewed 655,000 times by 390,000 fans over the previous weekend.

He argued that only people who want to know the results will click these links, meaning he's not ruining the surprise for anyone who prefers to find out while watching.