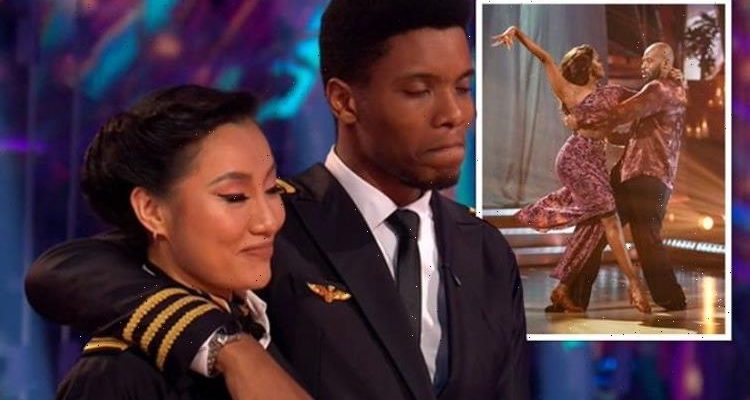 Strictly Come Dancing is heating up and Halloween week takes place this weekend, on BBC One. In the latest results show, former rugby star Ugo Monye was up against CBBC presenter Rhys Stephenson in the dance-off, much to everyone’s shock. Professional dancer Gary Edwards spoke exclusively to Express.co.uk about the latest result.

The Strictly Come Dancing audience and judges were shocked to hear Rhys Stephenson and Nancy Xu would be fighting for their place in the competition this weekend.

The pair danced an uplifting American Smooth to I’ve Got The World On A String and the panel said Rhys had made improvements since the week prior.

He had been accused by the judges of throwing too much energy into the slower dances but managed to impress them with the aviation-themed number.

Head judge Shirley Ballas also expressed her shock when she learned Rhys was in the bottom two.

The judging panel unanimously chose to save him, but professional dancer Gary said he should have never been in that position.

He told Express.co.uk: “The thing is I’m a huge fan of his anyway. I think to pigeonhole him into a certain type of dancing like ballroom is totally unfair.

“For me personally as long as he can survive, he’s got a good chance of going all the way.

“Simply because he’s multi-talented in all the different styles he’s likely to dance. He’s super talented and I can see him going all the way to the end when it comes to talent.

“But it’s whether or not the judges understand him as well, let alone the audience.”

He said Rhys is known to throw everything he has at each dance, no matter the style.

The judge said: “If anything he throws too much at it but it’s what you want, the last thing you want to do is basically have to try and drive someone to get more out of them.

“If someone is giving you 200 per cent it’s much easier to wind them down when you need them.

“Rather than someone who is only giving 30 per cent, so from that perspective, I just hope they get it right.

“I hope that the dance order suits them as well.”

On whether they are likely to win the series, Gary said: “Probably not,” but he was confident the children’s TV presenter would go far.

As for who his favourite coupling is this year, the dancer said he was rooting for John Whaite and Johannes Radebe.

He said: “They are frontrunners for me, by far. Overall for me, that is my favourite couple.

“It has nothing to do with them being same-sex. Just as a judge, judging something that is a partnership, lead and follow, they are for me outstanding at the moment.

“Johannes has blossomed on the show…I saw him do what he’s been doing and change from lead to follow on that first show.

“And that is just one of the greatest moments for me personally on Strictly.”

Gary is a 50-time world judge and former dance champion in Latin and Ballroom and has worked with professionals on Dancing with the Stars in America.

He is also president of World of Dance Studios. According to Great British Life, he was once tipped to replace Len Goodman as a judge on Strictly.

As for who could land themselves in the bottom two for Halloween week, Gary said Sara Davies and Judi Love could both be at risk.

EastEnders actress Rose Ayling-Ellis is still tipped to win with partner Giovanni Pernice, according to the bookies.

Strictly Come Dancing returns to BBC One on Saturday at 7.10pm