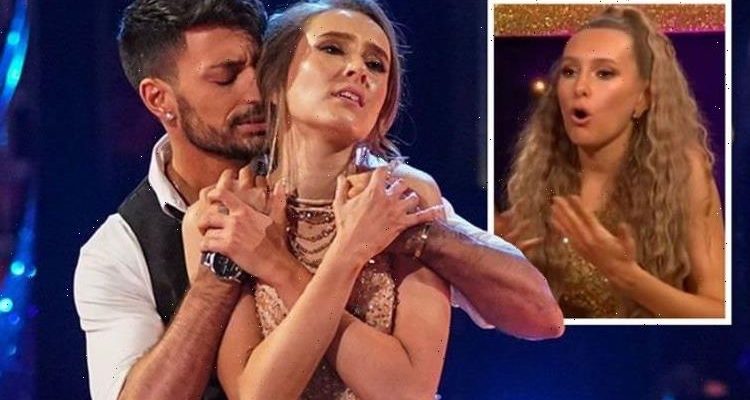 Strictly: Giovanni's wants to be top of Halloween leaderboard

Strictly Come Dancing is back on BBC One tonight and the competition is heating up with Halloween week. At this stage of the competition, it is EastEnders star Rose Ayling-Ellis and Giovanni Pernice who are favourites to lift the glitterball trophy. However professional dancer Gary Edwards spoke exclusively to Express.co.uk about some “horrendous foot errors” he spotted.

Strictly Come Dancing 2021 is proving to be one of the fiercest competitions yet as the level of talent at this stage of the series has been phenomenal.

There are some clear frontrunners who maintain their spots at the top of the leaderboard, including AJ Odudu, John Whaite and Rose Ayling-Ellis.

Rose and Giovanni impressed the judges with their stunning Viennese Waltz to Fallin’ by Alicia Keys.

Their performance included a conversation in British Sign Language, which won over the hearts of viewers.

The EastEnders actress has made Strictly history as the first deaf contestant to take part.

She has been a fan-favourite from the outset but pro dancer and judge, Gary Edwards, spotted some mistakes in her last performance.

He said: “The judges were saying they had great footwork and I just saw three absolutely horrendous foot errors.

“I actually disagreed with the whole footwork scenario, I actually saw plenty of faults in her footwork.

“Again she is someone for me who is blowing hot and cold. I think she is going to be totally dependant on what dance she gets and when.

“She’s looking really good to stay in for a long time but she could go out early if she gets the wrong sort of dance. I think that’s going to be quite interesting.”

However, in terms of entertainment level and performance, he gave a 10/10 score.

The World of Dance and Dancing With The Stars expert also gave full marks for storytelling and characterisation, as well as timing.

He added: “They are one of my favourites for the glitterball and have a fantastic performance level.

“The only weak point for me was footwork, too many toe leads and ball flats to go unnoticed.

“It should be a heel lead when dancing forward and in pivots, but still incredible for a non-dancer to achieve her level already.”

BetVictor has still put Rose at odds of 1/2 to lift the glitterball trophy this year, in front of Bake Off’s John at 4/1 and presenter AJ at 7/1.

In terms of the judges’ comments on her Viennese Waltz, Shirley Ballas jokingly compared the dance to her past relationship history.

She said: “Your narrative was fantastic, your acting skills – no wonder you are an absolutely fabulous actress.

“And you brought it all together with some beautiful footwork, with a gorgeous frame, but I just love the narrative and how you sold it.”

Anton Du Beke added: “It was terrific, I have had the pleasure on Strictly Come Dancing over the years to dance with some wonderful actresses.

“Being able to incorporate their ability as a dramatic actress into the choreography is a real pleasure.

“And Giovanni, congratulations, it was tremendously put together.” He did point out how she “just missed the fleckerl” which was “a shame”.

He praised her posture and arm line, calling it “immaculate”.

She received some kind words from Craig Revel Horwood, who made his iconic “fab-u-lous” remark.

For Halloween week, the pair will be dancing the Tango to Shivers by Ed Sheeran.

Strictly Come Dancing returns tonight on BBC One at 7.10pm.