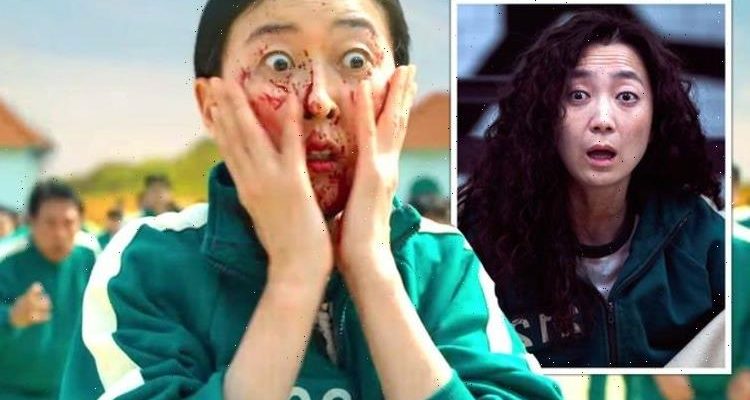 Squid Game is holding the number one spot in the Netflix top 10 and the South Korean thriller is full of dark twists. The TV series sees a group of strangers sign away their lives as they battle against each other to win a huge cash prize. Here are some of the most shocking moments from the show everyone is talking about.

The first of six games is called Red Light, Green Light and the contestants quickly twig on that it is a children’s game.

All 456 players are met by a terrifying life-sized doll, who gives orders on when they should move or stay still.

The rule of the game is to move forward on ‘green light’ and stop deadly still on ‘red light’.

At first, the players are unaware of the consequences, but they were in for a shock when they saw what would happen if they broke the rules.

The first contestant to move at the wrong time was shot dead, which caused the rest of the players to frantically attempt an escape.

Due to their movements, hundreds of them were shot down in a gory attack, leaving viewers with their jaws on the floor.

The contestants turn against each other

After a couple of the games have taken place, the event organisers dish out the next meal.

Each competitor is given a drink and a single boiled egg to eat, and there was a reason for the deliberate malnourishment.

The organisers had intended for the competitors to turn against each other out of hunger and exhaustion.

The reason for this was to eliminate the weakest players ahead of the next challenge.

What ensued was a brutal blood bath, in which the players used anything they could find to kill their competitors.

The heart-racing scene was elevated with the use of flashing strobe lights, creating a sense of panic in those watching.

A familiar game to many, it may not seem like the deadliest of challenges, but the losers suffered the most horrifying fate.

The competitors were asked to split into groups of 10, and they would go up against each other on an elevated platform.

For those who lost, they plummeted to their deaths, whilst the winning team moved on to the next game.

It was a nail-biting moment for Seong Gi-hun (played by Lee Jung-jae) and his team, as they were seemingly weaker than their opponents.

If it had not been for Oh Yeong-su’s (Oh Il-nam) motivational talk, they would have been wiped out.

The hanging of the doctor

The twisted game was created with some morals in mind, as it was intended for all players to be treated equally, no matter their background.

He was using his skills as a surgeon to dismember the bodies of those who had died, so the game organisers could sell their organs.

In return for his work, he was given insight into what the next game would be, so he could prepare.

However, he was found out by The Front Man (Lee Byung-hun) and was shot dead, along with the other organisers who had broken the rules.

Their bodies were then strung up in full view of the other players as a stark warning.

Fans have been curious to know whether the games are real, and they are all inspired by genuine childhood activities.

HoYeon Jung, who plays Kang Sae-byeok in the series, said filming the challenges was “actually terrifying”.

In a behind-the-scenes video, she is heard saying: “Filming [the show’s fifth game] Glass Stepping Stones was actually terrifying.

“The set was about one metre above the ground. We put real tempered glass there and ran around on it.”

The series took more than 10 years to come to fruition, with the original idea coming to light in 2008.