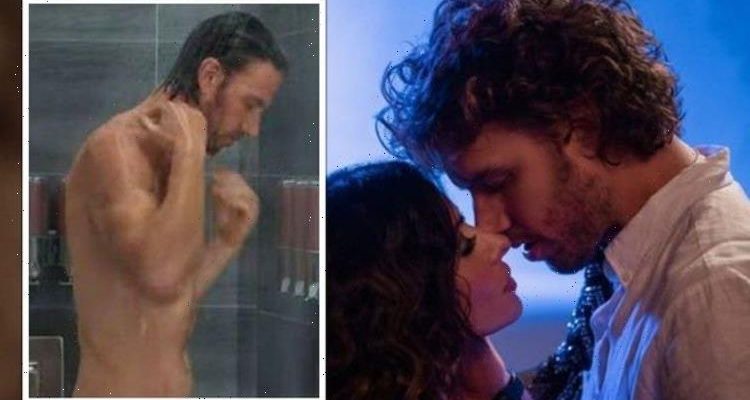 Sex/Life is the new Netflix series that has become a guilty pleasure for many fans of the streaming service. The raunchy drama follows the life of a wife and mother who is taken back to the exciting times of her youth when she reunites with an ex-boyfriend. One star of the show has now opened up about an intimate shower scene, amid rumours he used a body double.

Billie’s life gets flipped on its head when she begins journaling about an ex from her youth, Brad (Adam Demos).

As she reflects on her passionate relationship with Brad, Billie begins to question her whole way of life.

In the third episode of the Netflix drama there’s a full-frontal scene which sees Billie’s husband catch a glimpse of his love rival in the gym showers.

As the show has gained popularity, many fans have begun speculating about whether or not a body double was used for the scene.

She explained: “That’s not a body double. I mean, people usually ask is it real or is it a prosthetic?

“And I can tell you what Adam Demos says about it, which is, a gentleman never tells. So, we are leaving that up to the viewer’s imagination,” Stacy told Collider.

She explained that the production had an intimacy co-ordinator who managed any scenes with nudity and revealed it was important to have details of intimate scenes written out beforehand.

Adam, who played Brad on the show, has also spoken out about the steamy scene.

Chatting about the highly talked about moment, the actor said: “I was okay with it because you read the script and know what you’re getting yourself into from the start.

“So I don’t think you would sign on to a show after reading the scripts and then say no last minute.

“That doesn’t mean you can’t have discussions about comfort level, which they allowed us to have – and with the intimacy coordinator, so it felt a lot safer,” he added to Entertainment Weekly.

The scene was recently aired in an episode of Celebrity Gogglebox and drew gasps and screams from the likes of Denise Van Outen, Martine McCutcheon and Jamie Carragher.

“Is that real?!” Martin Kemp questioned when watching the scene.

Meanwhile, Jonathan Ross remarked: “Look, it’s got its own postcode!”

Sex/Life season one is available to watch on Netflix now.