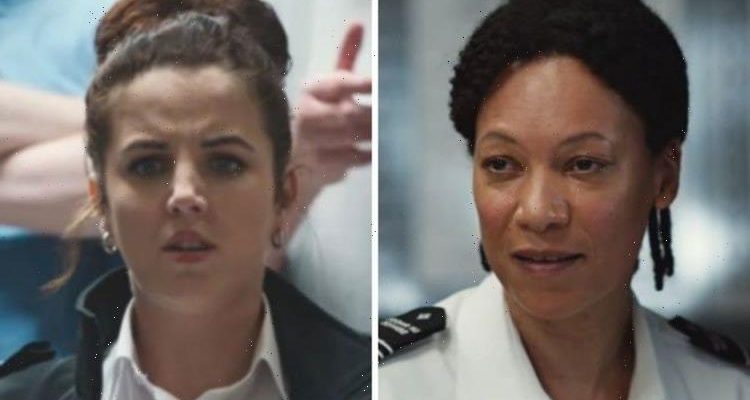 Screw is a six-part drama that focuses on the reality of working as prison officers among some dangerous individuals. The Channel 4 drama sees actress Jamie-Lee O’Donnell, who plays “mouthy” trainee officer Rose Gill as she tries to fit in with her colleagues. She is also keen to impress her boss, His Dark Materials star Nina Sosanya, who plays Leigh Henry.

The tale of the Channel 4 series is described to depict the “reality of life as a prison officer in an all-male prison in 21st century Britain”.

However, just minutes into the programme, viewers spotted a few errors within the plot.

One viewer questioned why prison officer Leigh was sleeping in a cell at the prison.

Others were left baffled by the actor’s dialect in the programme, while another branded the drama as “unrealistic”.

Some Channel 4 viewers claimed to “switch off” the first instalment because they were “bored”.

Taking to social media to share their thoughts, Kim raged: “Is a great idea but…I was an officer for 10 years and this is a load of s***! An African bullfrog lol. Did the creators & writers actually get any insight from officers?” (sic)

She went on to point out: “So a Prison Officer is sleeping in a cell on the wing! Already unrealistic from a screw of 10 years! I had high hopes for this!” (sic)

Eleni quizzed: “We’ve gone from a toad to a suicide threat?”

“Turned #Screw Off = Rubbish,” Rick simply said as Tony asked: “Is it professional for prison officers to swear in front of inmates? Or have I got this programme wrong? Is it comedy or serious?”

Twitter user Alan also claimed to switch off as he tweeted: “Turned #Screw off.”

“Started well but I can’t hear a thing! Half the characters are speaking like they are sucking a tennis ball. And it’s not an accent thing cos I’m from Yorkshire. I’ve had to put subtitles on,” Les pointed out as he commented on the dialect.

Shirley commented: “Having trouble following this it’s all too quick and can’t make out a lot of dialogue.”

Helen tweeted: “I gave up after 20 minutes which is a shame as I love Nina Sosanya. I wasn’t sure if it was trying to be a drama or a comedy.”

However, there was still some support for the new gritty Channel 4 drama as Ricki said: “What a drama this [email protected] Well played.” (sic)

And Corey agreed: “Well, #Screw was brilliant and off to a good start. What a cast, too…”

While Kate weighed in: “Well I liked it!”

The opening scene of the programme began with officer Leigh waking up in a cell.

The new officer then got a rather bizarre welcome as she was introduced to the rest of her team.

As they unlocked the prisoners’ doors, one inmate stripped naked and ran around the prison before being restrained.

Shortly after Rose discovered a frog in one of the inmate’s wardrobes.

Screw is available to watch on All4.