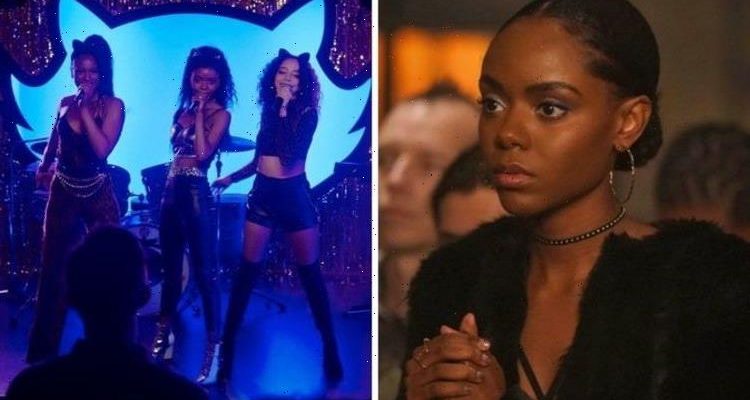 Josie McCoy (played by Ashleigh Murray) and her Pussycats, Valerie (Hayley Law) and Melody (Asha Bromfield), are making their long-awaited return in next week’s episode of Riverdale. Once the town’s most popular band, their comeback tour has fans once again campaigning for their own show on the CW or Netflix.

Viewers are calling for a Josie and the Pussycats spin-off series ahead of their highly anticipated return next week.

The band will perform once more in the 15th episode of season five after a long absence from the popular CW series.

Although Josie played a major role in the cancelled offshoot Katy Keene, this will be the first time the original trio will be playing together since the second season.

With the release of a short teaser trailer for next week’s episode, ‘The Return of the Pussycats’, several fans took to the comments to demand their own show.

“Josie and the Pussycats spinoff?????? Let’s make it happen please,” replied one viewer.

“It would be the only show where singing would make sense to the plot.”

Riverdale is infamous for its frequent musical episodes and one-off numbers sprinkled throughout the series.

Despite its theatrical reputation, the town’s only genuine musical export hasn’t reunited for several years after their initial break-up.

Another fan said: “If you ask me they’re the ones that deserve their own spin-off.”

“Ah yes the Josie and the Pussycats, the people who could’ve had a spin off way before Katy Keene.”

Considering Katy Keene (Lucy Hale) and her friends in New York were pulled from the network after just one season, it’s no surprise fans of the ‘Archieverse’ are looking for other opportunities for spin-offs elsewhere.

Josie and the Pussycats first appeared in comic books way back in 1963, and have remained one of the most popular fictional bands ever since.

Appearing in everything from an animated show from Scooby-Doo creators Hanna-Barbera to their own feature film, the Pussycats are certainly well-established enough to lead their own series.

Unfortunately, promotion for the series seems to have made it clear the band will be back together for just the one episode.

The synopsis for next week’s chapter reads: “After going MIA during the middle of her world tour, mega-star Josie McCoy returns to Riverdale unexpectedly.

“But it’s not until she reunites with her former bandmates Valerie and Melody, that she opens up about the real reason why she’s back.”

It seems Josie will be back in town for just one more Pussycats show after making it big as a solo act.

On the other hand, the new teaser hints at a potential relationship between Josie and Southside Serpent Sweet Pea (Jordan Connor).

Is Josie looking for a quick fling before she leaves town again, or could the prospect of a fledgling romance keep her in Riverdale for longer than expected?

Either way, reactions to Josie and the Pussycats’ return have already been overwhelmingly positive, so the announcement of their own series could be on the horizon.

Riverdale season 5 continues Wednesdays on the CW and the following Thursday on Netflix.