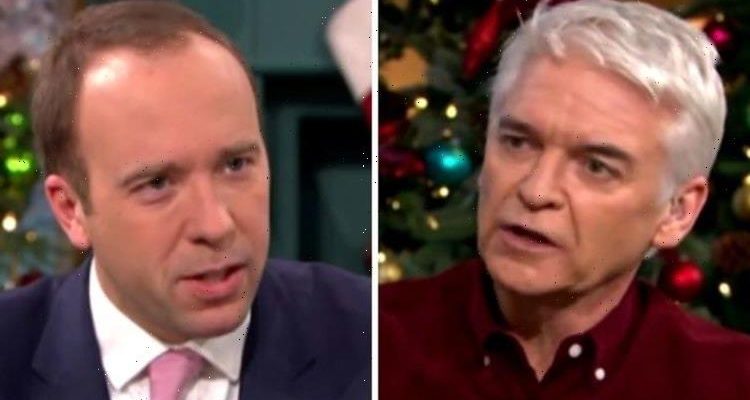 This Morning has been hit with more than 600 Ofcom complaints after presenter Phillip Schofield made a jibe about Matt Hancock’s dyslexia during a sit-down interview last week. When the former Health Secretary appeared on the ITV show, Schofield probed him on whether it was his learning disability that made him “misread” social distancing rules this summer. Many viewers have branded the interview “disgusting” and have asked the media watchdog to investigate.

According to Ofcom, the instalment of This Morning – which aired on December 7 – received a total of 628 complaints, with 626 relating to the interview with Hancock.

Hancock, who was diagnosed with dyslexia at university, was invited onto This Morning to discuss his call for all primary school children to receive dyslexia screening.

Holly Willoughby, who has spoken openly about being dyslexic herself, shared her support for Hancock’s bill, but viewers were infuriated when Schofield took a swipe at the former Health Secretary.

Schofield, 59, said: “For many children up and down the land this will be a very important bill.

“Was it your dyslexia that meant you misread social distancing rules?”

“No,” Hancock replied. “I can’t blame that on dyslexia or anything else.

“In fact, I’m not asking for any special favours because I’m dyslexic and in politics, I’ve got some things to offer in that case that was a mistake and I apologise for it.”

The politician added: “It was a failure of leadership because I came on shows like this and asked people to do things and then I didn’t follow those rules myself.”

Schofield chimed in: “At that time we were all in it together, we were here, you were there.

“We gave you a hard time about what we considered were major issues and problems and mistakes – the care homes, those sorts of things.

“Do you regret the fact that you’re not there when we start to come out at the other end of this?”

This Morning viewers were left reeling over Schofield’s “utterly disgusting” jibe, especially as Hancock appeared on the ITV show to pledge more support for dyslexia sufferers.

Kaz fumed on Twitter: “@[email protected] Utterly disgusting question to ask someone who has a recognised disability. Would you do that to a friend, [or] your mother?”

Iain Miller added: “Absolute disgrace, this is a completely unacceptable question. This is discrimination asking a minority group if their dyslexia prevents them from following rules.”

Suz Harrison commented: “Not the time. Being a dyslexic person I hope Holly sets him straight. This is an important issue with a massive lack of knowledge/awareness, especially in the education system so that cheap dig was not needed at this time. You don’t often get it wrong but this time you did.”

Peter added: “Even though your presenter was incredibly insensitive to all who suffer this illness with his deliberately abusive question, the production team and those behind this account are even worse for repeating it.”

An Ofcom spokesperson told The Metro: “We are assessing the complaints against our broadcasting rules, but are yet to decide whether or not to investigate.”

This Morning airs weekdays on ITV from 10am.