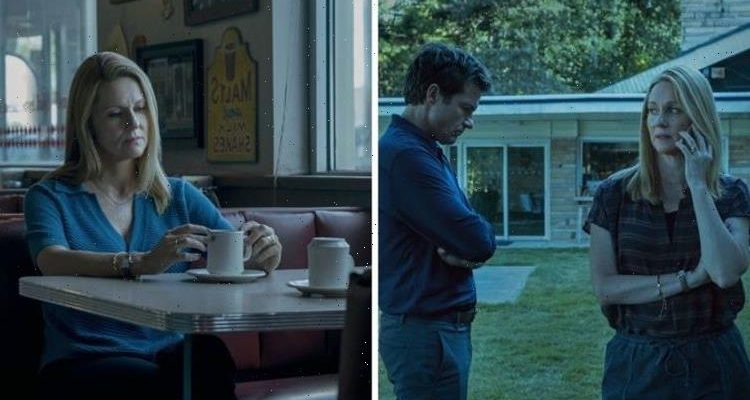 Netflix’s crime drama followed the Byrde family’s move to the Missouri Ozarks after patriarch Marty Byrde (played by Jason Bateman) got involved with money laundering. Now ahead of the season four release an eagle-eyed fan spotted a ton of clues which could see Wendy Byrde (Laura Linney) face the same fate as her brother.

In season one, fans learned Wendy had been cheating on her husband Marty with a private investigator Gary “Sugarwood” Silverberg (Bruce Altman).

The couple decided to stay together for their kids and relocate from Chicago to the Missouri Ozarks.

Their move was also motivated by a money-laundering deal gone wrong which saw Marty’s business partner Bruce Liddell (Josh Randall) shot to death in front of him.

In a desperate plea to keep his life, Marty agreed to wash $500 million in five years for the Mexican cartel.

In order to support her husband, Wendy worked different jobs in the Ozark before joining Marty’s business.

Throughout the series, fans watched as she transformed from a typical mother of two – to the one making all the business decisions.

Their hard work led them to open a strip club, a funeral home and then Ozark’s first riverboat casino.

However, this was all threatened when her brother Ben Davis (Tom Pelphrey) moved to town and under their roof.

His presence in the Ozark became a huge threat to their business after he stopped taking his Bipolar medication.

After falling in love with Ruth Langmore (Julia Garner) he realised his meds were stopping them from having sex and despite Wendy’s warning, Ruth encouraged him to come off the pills.

This led him to spiral out of control and when he found out about the Byrde’s involvement in money laundering he tried to expose them and their associates.

Unfortunately, this led to his demise after Helen Pierce (Janet McTeer) the cartel’s lawyer put a price on his head and although she tried to run away with her brother, Wendy eventually gave up his location after seeing how bad his mental health had become.

Throughout the series, a viewer spotted clues Wendy may face the same fate as her brother and shared their elaborate theory on Reddit.

They wrote: “I don’t think Ben is the only bipolar sufferer in the Davies family. I just think Wendy’s version is milder and undiagnosed.

“Wendy shares the same pivots between manic schemes, and angry, emotional outbursts and while Ben’s problems are entirely due to repeatedly refusing to listen to reason, and thinking he knows better than everyone else due to some inner sense, Wendy hardly behaves that much differently,” they explained.

They added: “I think it adds a layer of tragic irony to Ben’s death that her powerlessness to stop him running off the edge of a cliff was mirrored by the fact she was exhibiting similar symptoms herself, but like Ben, couldn’t recognise it, or would accept any help.

“Everything she screams at him in the car journey could equally apply to her, she killed him for being the exact same danger to her family that she herself is,” the viewer concluded.

Fans will have to tune into season four to find out if this is why Wendy will also meet her death.

It has been confirmed the upcoming instalment will be the last of the Ozark series so fans can expect an explosive ending.

Ozark seasons 1-3 are available to stream on Netflix.