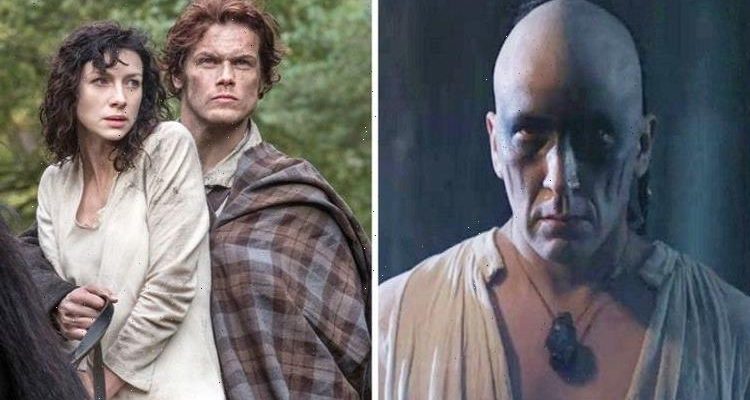 Television fans and readers alike have been stumped by the strange sighting of Jamie Fraser (played by Sam Heughan) at the start of Diana Gabaldon’s Outlander series. Thankfully, the Starz adaptation has plenty of clues sprinkled throughout, and one viewer thinks they might have spotted another one.

Outlander fans have unearthed a new clue in season four which could explain the appearance of Jamie Fraser’s ghost in the first episode of the series.

After Claire (Caitriona Balfe) and Jamie Fraser stake their claim on American soil, they encounter a group of time-travellers known as the Montauk Five.

The group was led by a man named Robert Springer (Trevor Carroll) who took the Native American name Ta’wineonawira, or Otter-Tooth.

Springer and his companions disappeared in 1968, travelling back to the 18th Century in an attempt to secure a British victory in the American Revolution.

Earlier on in the fourth instalment, Claire believes she witnesses a vision of Otter-Tooth during a thunderstorm.

As she sheltered from the heavy rain, a ghostly figure appeared to her and seemed to blink in and out of existence with the flashes of lightning.

Later, she recalls her strange experience and questioned whether she had, in fact, witnessed some sort of spirit.

Taking to Reddit after spotting the connection to Jamie’s ghost, one fan speculated how Claire’s reasoning could explain Jamie’s appearance in the 20th Century.

In episode 13, Man of Worth, she says: “I believe that ghosts only exist when there is something to remember, a story worth telling, or a message worth relaying.”

Jamie’s spirit could have been trying to send Claire a message from beyond the grave, if her logic is to be believed.

User GoedGek asked fellow Outlander fans: “Do you think she was on the mark…?

“Which one would Jamie’s ghost in S1E1 be…a message to be relayed, something to be remembered?”

The Highland ghost doesn’t seem to be desperate to attract Claire’s attention when he appears outside her window.

However, it may have been bound by the laws of the afterlife and unable to converse with the living.

The fan continued: “To me it really looked like he was just there to look at his Claire.”

“But then again Frank kind of interrupted whatever it was,” they added.

Otter-Tooth’s ghostly appearance led to Claire unearthing his final resting place after she dug up his skull and pendant.

Once Jamie presumably dies in the 18th Century, his spirit could be calling Claire for a similar purpose, urging her to travel back in time to find him.

Thankfully, the sixth season of Outlander is set to premiere early next year, so the answers fans are looking for could be just round the corner.

Outlander season 6 will premiere in early 2022 on Starz.