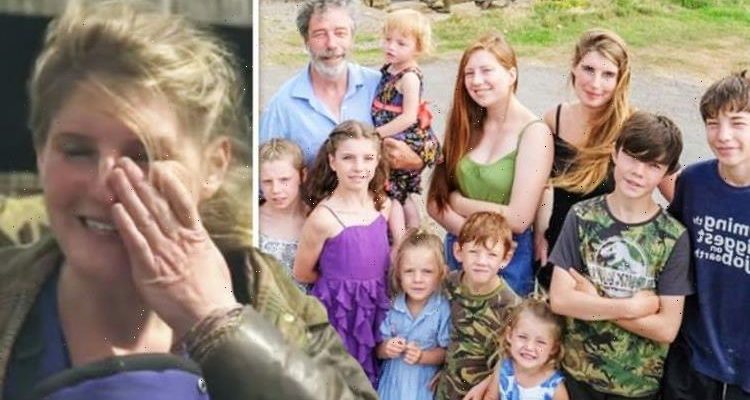 Amanda Owen shares Raven, 20, Reuben, 17, Miles, 15, Edith, 12, Violet, 10, Sidney, nine, Anna, seven, Clemmie, five and Nancy, four with her husband Clive Owen. The family live and work on Ravenseat Farm but the Our Yorkshire Farm star admitted she does have a few concerns about their rural life during an appearance on Trees A Crowd podcast with David Oakes.

David asked: “How stuck do you get in the winter when it snows?”

“Every winter it snows, it’s nice. I mean for quite a lot of Britain now snow is a rarity, it’s a big thing, you get to see pictures on social media.

“Here you get snow proper and it blows about, you get dry snow, you get wet show.

“If you can imagine, on this bank snow upon snow, that’s what it does.”

Read more: Our Yorkshire Farm: Amanda Owen on why Ravenseat will always be home

“We live in an exposed high place, we seem to have a little microclimate of our very own,” Amanda shared.

“If you can imagine, I don’t fear the snow, if it’s well forecast I know it’s coming, we know what to do we know how to work with it.

“Snow in winter is to be expected, snow winter is kind of like comforting, it’s right.

“It’s like when the kids are swimming in a river in February I think that’s worrying.”

“So you have to be careful what you call the weather, there have been some really funny weather episodes,” she noted.

“We’ve had flooding, we’ve had hailstones in the middle of summer and it’s definitely more topsy turvy.

“There are some certainties and that is we will spend quite a bit of time snowed in.”

David interjected: “I don’t want to talk about climate change necessarily but are you finding that things are shifting?”

“If you imagine this spring, last week of February, children swimming in the river.

“The year before we were absolutely happened up with snow we had a two-day snowstorm, whereby it was probably as bad as we’ve seen it in a lot of years.

“It hit a lot of the country, the beat from the East, it was very, very difficult times.”

“Not a lifetime, but long enough to get a feel for the place, I think places like this mould you.

“I came here as a vaguely normal person [but] a place like this where it’s so open and so wild I think it kind of builds on your character, it makes you into who you are.”

Our Yorkshire Farm is available to watch on My5.