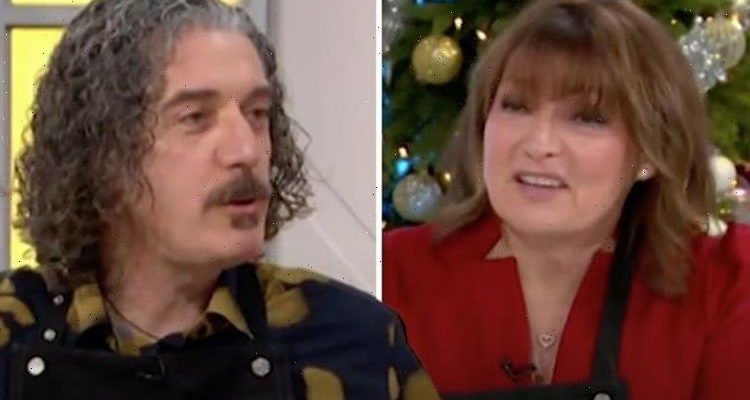 Bake Off: Giuseppe says he didn't 'forget' to turn on oven

Paul Hollywood and Prue Leith crowned Giuseppe Dell’Anno the 2021 Great British Bake Off champion after staving off competition from Chigs Parmar and Crystelle Pereira. However, during the tense finale, there was one moment where fans feared Giuseppe had inadvertently scuppered his chances of winning.

During an appearance on ITV’s Lorraine, Giuseppe opened up to host Lorraine Kelly about his Bake Off victory.

She quizzed him on the nerve-racking moment he realised his oven was cold as he prepared his Alce in Wonderland creation.

“Did you love it?” Lorraine asked. “The thing about it is it’s stressful, we’re feeling it, I’m at home behind the sofa.

“I mean in the final you forgot to turn the oven on and things like that.”

Giuseppe hit back: “I need to straighten this out I didn’t forget I switched it on

“But it’s one of those appliances that are cleverer than you and it switches off if you don’t slam the door shut.”

“Nothing to do with you it was the stupid machine,” Lorraine quipped.

The Bake Off winner joked: “That’s the official version.”

Giuseppe explained he hadn’t been able to tell anyone about his win for months.

He said: “The filming ended in early July, so it was a few months it had to be kept secret.

“Especially [from] my kids – the whole village would have known in half an hour.”

The ITV host revealed she’d love to see a show with the Bake Off winner and fellow contestant Jurgen teaming up.

Giuseppe explained how all the contestants have kept in touch since meeting on the show.

“I’m hoping it’s going to last because I love all of them.”

After winning the series, Giuseppe dedicated his accomplishment to his father, a professional chef.

Lorraine asked the baker if he’d follow in his dad’s footsteps and write a book.

He replied: “I’d love that. I’ve got all his notes – just looking at them is heartwarming, and I wanted to tidy them up and write them up for the kids.

“But then I thought, there might be a bigger audience than that for this. People told me to write it down and pass it on.”

Great British Bake Off is available to watch on All 4. Lorraine airs on ITV on weekdays at 9am.