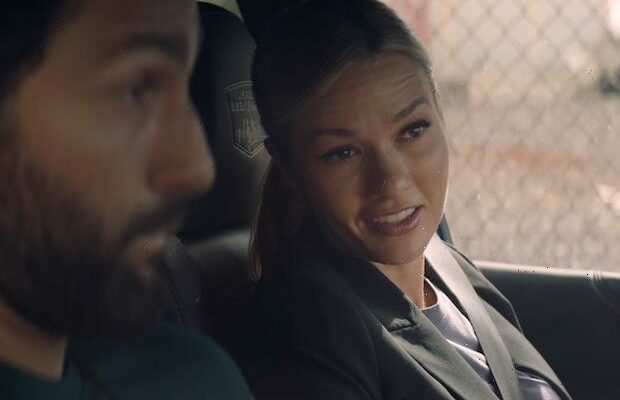 Has NCIS: Hawai’i‘s Special Agent Lucy Tara been sinking or swimming in her role as Agent Afloat? Jesse gets a fun update on his colleague in TVLine’s exclusive sneak peek at tonight’s episode.

Back in November, Special Agent in Charge Jane Tennant (played by Vanessa Lachey) informed Lucy (Yasmine Al-Bustami) that she had been accepted for the Special Agent Afloat position (stationed aboard an aircraft carrier), which she had applied for when back she and Kate (Tori Anderson) were broken up.

Since then, we have heard little about how Lucy is faring (though she did resurface, on land, during the NCIS: Los Angeles portion of the Jan. 9 crossover event. Alas, neither Kate nor Jesse (Noah Mills) got to see Lucy in that part of the crossover, so in the clip above, in the course of pursuing a POI, Kate updates Jesse on sea-weary Lucy’s latest accomplishments.

Press play above to see what has Lucy feeling proud!

CBS has been tight-lipped on when exactly Lucy will rejoin her team (and girlfriend Kate!) in Hawaii for good, though series front woman Lachey assured TVLine in mid-December, “She still here and she’s still around, but we try to honor what [acting commitments Yasmine] has back on the mainland and maximize the time when she is here. She’s here right now, and we just wrapped two massive water days where all of us were getting soaking wet.”

In tonight’s episode of NCIS: Hawai’i, titled “Rising Sun,” when Special Agent Pike (played by Mark Gessner) is ambushed while working undercover with a Japanese crime family, the team must find the person responsible for orchestrating the attacks. Also, Kai goes deeper into his investigation regarding an old friend turned criminal.

Want scoop on NCIS: Hawai’i, or for any other show? Email [email protected] and your question may be answered via Matt’s Inside Line.