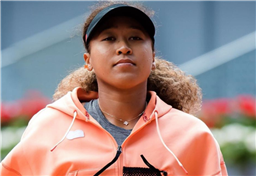 Naomi Osaka, the world’s No. 2 tennis player announced on Thursday that she was withdrawing from her second major tournament in a month. A statement released to ESPN by Osaka’s agent indicated that, after withdrawing from the French Open in May, she would not play Wimbledon either, which begins June 28.

The statement read as follows:

Naomi won’t be playing Wimbledon this year…She is taking some personal time with friends and family. She will be ready for the Olympics and is excited to play in front of her home fans.

The 23-year-old tennis superstar was born in Japan and will play for her country in this summer’s Tokyo Olympics.

A message of support was later posted to the official Wimbledon Twitter account wishing her all the best and indicating a “hope to welcome you back next year.”

Osaka withdrew from the French Open after refusing to participate in post-match press conferences. In a social media post she cited social anxiety, media pressure and long bouts of depression. That post struck a nerve with athletes and celebrities, many of whom indicated support on her Instagram including Kyrie Irving, Venus Williams, Coco Gauff, Lewis Hamilton, Olivia Munn, Michelle Wie, Skylar Diggins-Smith and Usain Bolt.

During last year’s U.S. Open, Osaka wore seven different face masks, one for each round of the annual tournament. The masks, which she started wearing when the tournament began on Aug. 31, bore the names of Breonna Taylor, Elijah McClain, Ahmaud Arbery, Trayvon Martin, George Floyd, Philando Castle and Tamir Rice.

Asked by a reporter after that tournament what message she wanted to send with the names, Osaka responded, “Well, what was the message that you got was more the question. I feel like the point is to make people start talking.”

News of Oskaka’s withdrawal comes after two-time Wimbledon champion Rafael Nadal also announced he was pulling out from the tournament as well as the Olympics, citing the short turnaround between the French Open and Wimbledon and the need to listen to his body in order “to prolong my career.”