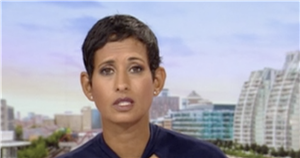 The 46-year-old morning host along with her co-star Charlie Stayt, 59, were left utterly stunned after they'd previously been watching a man dangerously joyride an e-scooter on a busy motorway.

Charlie said the police were "reminding people that e-scooters must not be ridden on roads with a speed limit of more than 30mph".

The cast were left completely dumbfounded after witnessing the disturbing footage – with both Naga and Charlie seemingly lost for words.

Getting the show back on track, Naga interjected: "Owain say something sensible after that."

He quickly replied: "Well what I can say… which is probably good news, is that we're going to see a blue sky."

He asked both presenters: "Does that help?"

"Brilliant," said Owain as he began to speak about the forecast for the weekend.

Last week, the BBC Breakfast came up against eagle-eyed fans who were worried to see that Louise Minchin had been replaced by Sally Nugent on the programme.

Viewers couldn't help but wonder if Louise had slipped out the backdoor without saying goodbye – after announcing she was standing down from her hosting role after 20 years of service.

While another added: "I do love Sally but nobody can host this show like Louise."

As there had been quite a big reaction on Twitter, Sally explained Louise's absence.

Setting the record straight, Sally confirmed she was holding the fort while Louise enjoyed a summer holiday with her family in Wales.