Friendly warning: We’re about to spoil Episode 2 of Fox’s Monarch. Don’t want to be spoiled? Come back after you’ve watched.

Yep, Monarch really did that.

The series premiere of Fox’s country drama ended with Dottie Roman (Susan Sarandon) on her literal death bed after making daughter Nicky (Anna Friel) promise to help her commit suicide. But when the act was interrupted by Nicky’s sister Gigi (Beth Ditto), fans were left to wonder whether Dottie survived the grim ordeal.

Spoiler alert: she didn’t! Tuesday’s second episode, which marked the show’s official time slot debut, confirmed that Dottie went out on her own terms, leaving her family — most of whom have no idea what really happened — to pick up the pieces. And lest you doubt that Dottie is gone for good, the show gave us a front-row seat to her funeral, complete with the most ludicrous hologram performance we’ve seen in… ever?

Executive producer Jon Feldman admits that killing off Monarch‘s A-list star to early in its run is a big swing, but as he assures TVLine, “We keep her alive throughout the series in flashbacks. She certainly looms large over the show. She appears in subsequent episodes over the course of the season. Even though she’s technically not with us, she’s very much a part of the show.”

As for the actress whose character is responsible for carrying out Dottie’s final wish, Friel tells TVLine, “It was one of my dreams to work with her. She’s magnificent, charming, eloquent, funny, sexy, warm and smart. I just longed for more scenes with her! Did we really have to do that with the storyline? Can’t it all be a dream?” 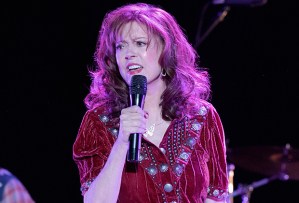 Episode 2 also answered a burning question about the show’s music, by way of a funny cameo from Shania Twain. The iconic singer was a guest performer at Dottie’s funeral, an event she begrudgingly attended due to Dottie supposedly stealing “Man, I Feel Like a Woman” from her back in the day. So if you were wondering why so many of the Romans’ hits are actually covers of other artists’ songs, there’s your answer: in this universe, they belong to the Romans.

“We are blessed with some amazing musical talent in front of and behind the camera, but writing original songs every week is a difficult thing to pull off,” Feldman tells TVLine. “Using songs that the audience knows creates a sense of wish fulfillment and fun. For the Romans, it creates a musical credibility when you see them performing these songs, which we know as catchy hits. It gives the show another aspect of fun, that we get to have our characters sing these iconic songs.”

Your thoughts on Dottie’s demise? The music of Monarch? Whatever’s on your mind, drop it in a comment below.