After Environment Secretary George Eustice claimed a Scotch egg counted as a substantial meal, Piers Morgan was keen to find out if Mr Gove agreed. The Good Morning Britain interview descended into chaos as Morgan and Susanna Reid grilled Gove over his definition of a substantial meal with the government minister failing to give an answer they were happy with.

Morgan remarked: “With respect Mr Gove, if you are one of the gang of four that’s been deciding all of this stuff all year, and even you can’t tell us what a substantial meal is, how is anybody supposed to know when they go to a restaurant or pub what to order?”

“Well you flatter me Piers by putting me in any gang,” Gove replied.

Morgan hit back: “Well you are in the gang aren’t you? You, Rishi Sunak, Matt Hancock and the Prime Minster.”

“No I’m not in any gang,” Gove clarified. “There is something called the cabinet and they take appropriate decisions.” 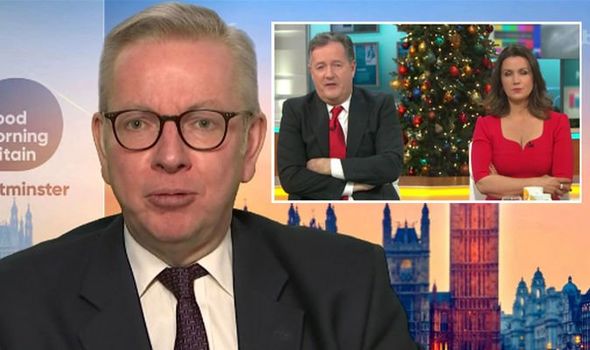 Interrupting, Morgan teased: “We were led to believe it was the four of you, the big boys.”

“No, even though you flatter me I think you’re also being a little bit unfair to the hospitality sector which has been able for years now.”

Again he was cut off as Morgan snapped: “But my point is even you Michael Gove doesn’t know what a substantial meal is yet you want us to all go out and support this industry and abide my the rules.

“Once more, we have government ministers who are not able to tell us what their own rules are.” 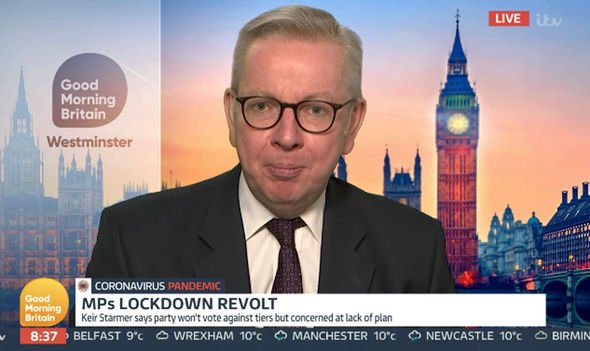 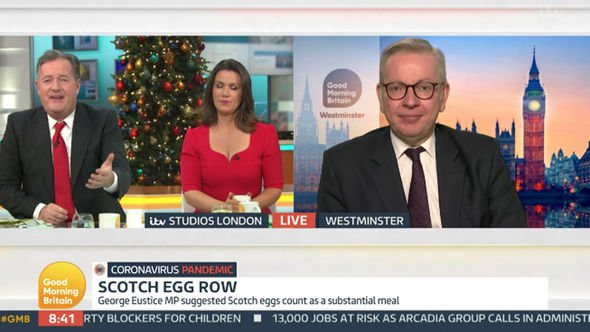 Reid cut in to add: “Well I would say yesterday in fact, a government minister did tell us what a substantial meal was because George Eustice was talking on a radio station and said it was a scotch egg.

“Now, if I was running a pub and tonight, at midnight I went into tier two, I would then take it as read that the government had told me I could serve a Scotch egg.

“You’re now saying that’s not a substantial meal. So even the government isn’t agreed. What are pub owners supposed to do?”

Those tuning into GMB were far from impressed with the interview and took to Twitter to slam Gove’s answers.

“#GMB @GMB this was so frustrating thing to watch. He doesn’t know what his own law is so how are we,” one viewer posted.

Another added: “Credit where credit is due though, I’m thankful that @piersmorgan uses his platform to call out the absolute complete failings in government.

A third continued: “#scotcheggrow why can’t you answer the question grove @piersmorgan he is so boycotting the question #GMB.”

“I can see now why the MP’s boycott GMB! When challenged they haven’t got a clue! How can you not know what a substantial meal is, when you’re in charge of that law?! Ffs #gmb #MichaelGove #1stDecember #December1st,” someone else tweeted.

A fifth posted: “Are we really arguing about whether a scotch egg is a substantial meal? What even is this year!!! #gmb.”

Good Morning Britain airs weekdays on ITV at 6am.