If you’ve never seen Medicine or Myth? on SBS and you tune in halfway through an episode you could easily be forgiven for thinking that you’re watching a scripted satire. The show allows ordinary Australians to pitch the homespun or traditional health remedies they believe in to a panel of qualified practitioners, and the backstories and fervent self-belief of the hopefuls can start to appear like a running gag played with a straight face.

The most promising – or least ludicrous – remedies are sent off independent trials, although the results are initially expressed by independent volunteers and the whole enterprise feels as if it’s skirting broader social responsibility. The trio of judges, including prominent neurosurgeon Dr Charlie Teo, are the scientific equivalent of Shark Tank’s millionaire entrepreneurs, but the format their encounters most suggests are the loopy open auditions for The Voice, where the producers shepherd the tone deaf and too daft into the camera’s path.

On Monday night’s episode Susan was advocating walking meditation – a practice invented by monks in China 4000 years ago – as a bulwark against cancer. “The finger pointing to heaven,” she intoned, circling a potted tree brought into the studio while adopting a formal stance. The judges were polite, sometimes encouraging, even though her claims for the practice’s success rested on her personal testimony as a breast cancer survivor. Susan didn’t get what she wanted, but the show did. 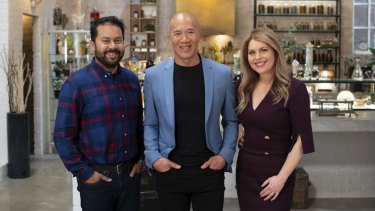 On one level this is all very amusing – an approach accentuated by the quick wit and encouraging exhortations of host Jan Fran – but it speaks to a worrying trend in science playing second fiddle to lifestyle interests and alternative beliefs on television. At a time where people are determined to embrace their personal beliefs to the point of divisiveness (just ask a climate scientist), Australia’s public broadcasters are walking a fine line in balancing diversity, entertainment and responsibility.

On the ABC the latest series of Ask the Doctor continues to mostly navigate these challenges with a reasonably balanced mix. The “consult your own doctor” disclaimer tops and tails episodes, even as you’re getting the lifestyle lingo applied to the scientific study of important health-based issues. This week and next week’s episodes of the show hit the sweet spot of casual curiosity and documented research: “we road test the latest popular diets,” declares co-host Dr Sandro Demaio.

The testing was introduced by co-host Dr Caroline West and run by Dr Clare Collins, professor of nutrition and dietetics at the University of Newcastle, and it involved four volunteer couples individually tied to the ketogenic, paleo, 5/2, and flexitarian diets for a month. The introductory flecks of information about those diets came with stock footage gags and quick cuts to vintage B&W footage, which is an issue Ask the Doctor struggles with: it’s often desperate to spice up the narrative with gassy, giggly flourishes. 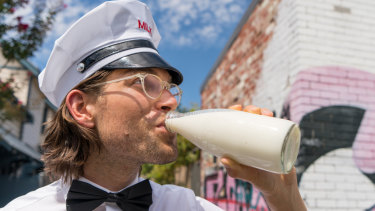 Is it funny or a demeaning distraction having Dr Sandro Demaio dress as a 1950s milkman making a delivery to introduce a segment on the many different types of milk now available in Ask The Doctor?

Is it funny or a demeaning distraction having Demaio dress as a 1950s milkman making a delivery to introduce a segment on the many different types of milk now available? Fringe internet beliefs, such as A2 protein rich milk helping children with ADHD or even adults with schizophrenia were shot down by the qualified expert, but there’s an urge to not swerve into public objection by hedging bets – “the jury’s still out,” Demaio prompted elsewhere in the slot – with cautionary non-verdicts.

The ABC is probably still gun shy following the setbacks experienced in 2013 and 2016 – in regards respectively to cholesterol and heart disease and a claimed link between electromagnetic radiation and brain cancer – by its flagship science show Catalyst. Those episodes were reviewed and ultimately excised, with Catalyst itself being reformatted, but the effect now is that when a stronger voice is required to quash hucksters and fanatics the volume can be lacking.

Ultimately Ask the Doctor did deliver diet verdicts, however hard they strained for balance. The ketogenic, for example, “made Alex and Beau nauseous, it was nutrient deficient, and it raised their bad cholesterol,” West observed, “but they did lose some weight.” The hosts can dress up, but in the end shows that rely on science for information and entertainment can’t dress their answers up. The harshest medicine should always be truth.