Eight years ago, comedian, broadcaster and quiz champion Matt Parkinson dropped dead. He was playing indoor cricket when there was a glitch with the scoreboard. His team mates saw him lie down on the pitch. They assumed he was pranking – pretending to nap – until play resumed.

But the umpire was troubled. He hurried over. Several mates gathered around. They prodded, "Come on, Parko, this isn't funny any more." 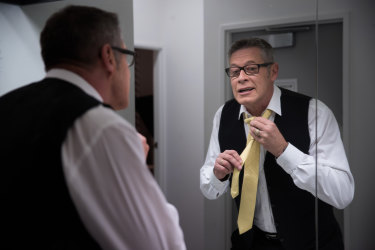 Matt Parkinson adjusts his tie before heading to the studio to stare down his demons.Credit:Simon Schluter

Then they rang the ambulance. Matt Parkinson's heart stopped beating for 10 minutes. A medical specialist tells me that, yes, Parkinson was dead. And, he says, it is astonishing that he was resuscitated after so long.

His good fortune was that the umpire was a retired serviceman with experience of giving CPR. He also had the strength to keep pumping – again and again. Another bloke, playing cricket in an adjacent pitch, rushed to assist with the chest compressions and one of Parko's teammates gave him mouth to mouth.

These three men, along with the ambos, saved his life.

At the hospital, the doctors warned his wife, TV producer Maryanne Carroll, to steel herself for the possibility of brain damage. What followed was miraculous. Parkinson's brain function was unaffected.

If anything, his brainpower has become even more extraordinary. These days he is a professional genius. He is one of five quiz masters (Chasers) who preside over Channel 7's high-rating general-knowledge game show, The Chase.

When I arrive at the Channel 7 studios in Dorcas Street, I tell the receptionist that I have an appointment with Matt Parkinson.

She points me to a seat in the foyer. I find myself sitting with an excited group of four people. They are the contestants in today's game.

An Irish girl confesses to the others in a sweet lilt, "Oh I hope we don't get Goliath. I'll go to jelly. I fancy him something rotten." 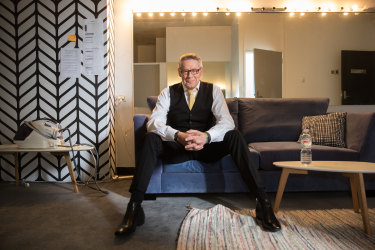 The show's publicist guides me through a labyrinth of corridors until we reach Parko's dressing room. These "dear old dressing rooms", he tells me, have been here since the black and white era, when cameramen and sound technicians wore shirts and ties. The walls used to be decked with photos of old Channel 7 celebrities – Happy Hammond, Ivan Hutchinson, Bill Collins and the World of Sport blokes, Ron Casey and "Uncle Doug" Elliott.

Parkinson first came here in the '90s, when he performed in the comedy series Full Frontal. He was in the first two series, when Ted Emery and Andrew Knight were running the show. He reels off a rollcall of names: Julia Morris, Steve Vizard, Peter Moon, Michael Veitch, Eric Bana.

I suggest it must have become harder to be a comic in an era that is growing more and more puritanical. But he's not buying that. "I think it's good that people are more careful of what they say these days. Language is fundamental to how we treat each other."

"Are you really a comedian moonlighting as a quizzer? Or vice versa?" I ask.

Parko stretches out his long legs and takes a swig of water. "I'm really an actor who's picked up any gig that comes along." 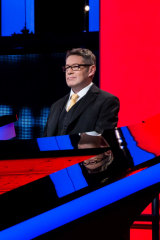 Matt Parkinson on the set of The Chase.Credit:Channel 7.

Early in his career, when he was still living in Perth, he got some sobering advice from a theatre director when he was auditioning for a role in a Chekhov play. The director said, "Frankly, you're going to tower over everybody else in the cast. You're two foot taller than the girl playing opposite you. And this, my friend, is going to happen to you over and over again."

His advice: diversify. And so Parko moved to Melbourne.

He tells me he feels at home in TV studios. In fact, this is where he started out, 41 years ago: he was in his school's It's Academic team in Year 10. They won their way to the state finals.

The combination of collegiality and professionalism is what he enjoys about TV. It's relaxed, but it's focused. So while people may be joking and laughing, the meter is running and everyone is aware of it. If any cog in the machinery breaks down, you burn money.

Parkinson also has fond memories of Channel 9's old studios in Richmond. Not surprising. In 1992, he won everything on the station's Sale of the Century.

So how does a quiz champion prepare? His wife once told me, "He studies". And yes, today he is working on a list of popes. He demonstrates" "Leo XIII, Pius X, Benedict XV, Pius XI, Pius XII, John XXIII, Paul VI, John Paul I…."

He explains that it works as an affirmation: "See! You remembered that! So you must be fit to take part in this remembering contest, because you remembered the popes and they don't mean anything to you!"

It's the eclecticism of remembering that excites him. "I might realise that I haven't kept up with the West Indian cricket team. So I go back and familiarise myself with their names. Or after the last election: federal ministers; new electorates."

"Are you worried that memory is finite?" I ask. "That for every new fact you learn, an old one drops off the back?"

"No. I think about the mind as being a vast, old-fashioned library. The library is your memory. And, in the library, you have an assistant who retrieves the information for you."

I think about the mind as being a vast, old-fashioned library.

He slows his voice down. "The important thing is to keep your assistant very, very calm. Even when you have three seconds left on the clock and the tension is near boiling point, you must never bellow, 'FIND ME THE ANSWER TO THIS QUESTION RIGHT NOW!'

"What you have to do is to turn to your assistant and say calmly, 'Now where do you think we put the answer to that question?"'

I am reminded that in an hour Parko will have to pit himself against those four eager contestants I met in the foyer.

"Have you always been competitive?"

Not at all. "Even with board games my sisters used to wipe the floor with me. So I got used to the idea of just enjoying taking part. And it turns out that is a very successful winning strategy.

"Take Ash Barty. Or Roger Federer. They just love showing up for the contest. The idea of doing a McEnroe – I'm gonna lay waste to my opponents, I'm gonna burn the ground – that's not my style."

Some years ago, Parko experienced a major losing streak on The Chase – and he began to doubt that he was the man for the job. In his words, "I couldn't find my way back."

He shared his anxiety with the show runner, who put him in touch with a sports psychologist.

At first, Parko was reluctant to make an appointment. He was certain the psychologist would serve up all sorts of cliches about being a winner. But that visit was life-changing. The psychologist asked him, "What are you thinking about when you're losing?"

He was certain the psychologist would serve up all sorts of cliches about being a winner.

Parko said, "When I get a question wrong, I play out this scenario of smart people at home scoffing at the TV: 'You idiot.' People I hoped to impress, having nothing but contempt for me."

"Actual people you know?" I ask.

The sports psychologist pointed out some basic facts about Parkinson's impeccable qualifications for this incredibly tough challenge. He is the man for this job.

But the real game-changer was when the psychologist asked, "When in a place of doubt, what is it that you are not trusting?"

When a golfer is not putting accurately or a full forward can't seem to get the footy to go between the sticks, what do they do? They change their approach. They lose confidence in the tried and true – in the very skills that have been the key to their success.

"So, what happens now if you get a question wrong?"

The time has come for Goliath to don his costume and assume his intimidating persona. He will stride down the catwalk into the citadel of flashing lights, and stare down his demons.

One final question: "What did you learn from your brush with death?"

Parko considers. "I learned that when you fall over, people will look after you."